Jon McNeill is becoming COO at the popular ride-hailing start-up.

Executive retention is definitely not one of Tesla's (TSLA 1.24%) strong suits. Last year saw a handful of notable departures, including CFO Jason Wheeler, head of business development Diarmuid O'Connell, and Autopilot head Chris Lattner, among others. O'Connell had been with the company for over a decade, while Wheeler was CFO for just over a year. Lattner only lasted about six months, but reportedly left due to a strained relationship with CEO Elon Musk.

Musk's cousins also left Tesla last year, after joining the company through the 2016 acquisition of SolarCity. Unfortunately for the ambitious electric-car maker, it's losing another one of its top execs. 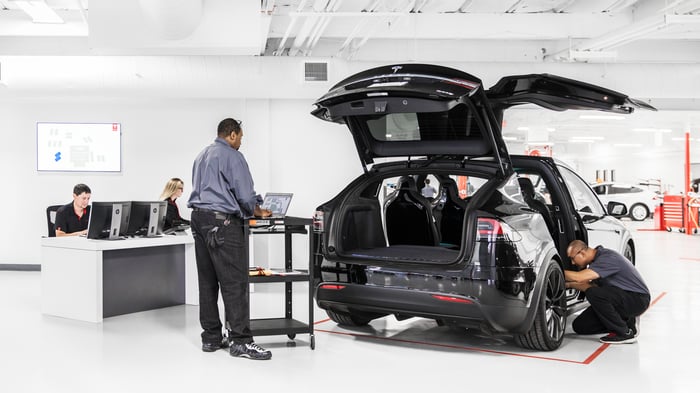 On last night's earnings call, Musk mentioned that Jon McNeill, who was serving as president of sales and service, would be leaving the company. McNeill had joined Tesla in late 2015 around the same time that Wheeler did, and was an incredibly important executive leading Tesla's consumer-facing functions. Tesla's integrated sales and service model is one of its strong suits. I had the pleasure of working with McNeill briefly in 2016 at Tesla, and can attest that his departure is a huge loss for the company.

It was a startling announcement, and it wasn't immediately clear why McNeill was leaving, particularly as Tesla offered him a hefty $700,000 bonus incentive last August contingent upon meeting certain performance targets. McNeill was one of Tesla's highest-paid executives, with a base salary of $500,000. He took home $2.4 million in total compensation in 2017, according to Tesla's annual proxy statement.

And then popular ride-hailing start-up Lyft dropped the bomb:

So psyched to join this great team! https://t.co/y95zixN83F

Musk noted that Tesla would not be searching for a replacement, and Tesla's sales and service organization will report directly to him. It's worth pointing out that when O'Connell left the company, his team and responsibilities were transferred to McNeill.

As if Musk wasn't already spread too thin between shooting his car into space and selling flamethrowers, there is a real risk that all of these important functions may not receive full-time leadership. Tesla continues to struggle with scaling up production of Model 3, but as it makes progress, those resulting volumes will require a commensurate scaling of Tesla's sales and service operations.

In the Q4 letter, Tesla notes that it now has 330 total store and service locations worldwide. "In 2018, we will continue to increase our service capacity with the goal of always remaining ahead of the Model 3 ramp," Tesla wrote.