The latest quarterly earnings beat was nice, but that’s only part of the story.

Shares of Walt Disney (DIS 1.84%) have struggled in recent years, and in that time, I added the entertainment superstar to my portfolio for the long haul. Business has been showing signs of a comeback, and paired with the recent weakness in the broad market and Disney's better-than-expected fourth quarter, I ended up adding to my position.

Here's why you should considering following in my footsteps. 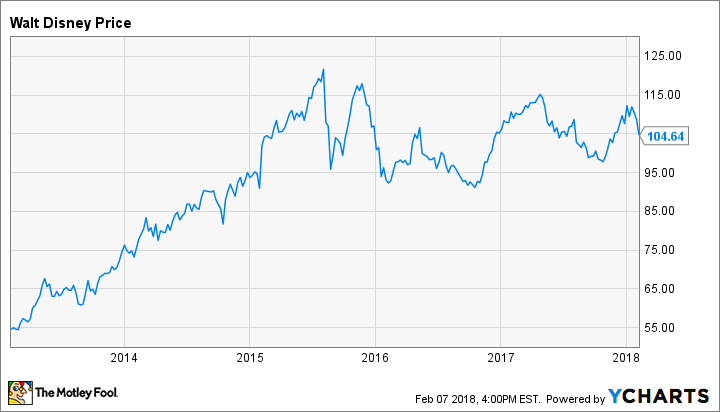 Setting the bar at the silver screen

Disney has a strong movie pipeline, honing in on what sells best at the box office with the track record to back it up. In the company's last reported quarter, releases like Thor: Ragnarok, Star Wars: The Last Jedi, and Coco helped Disney beat profit expectations despite declining revenue from its network TV businesses.

In the years ahead, the company is set to release a steady stream of movies based on its Marvel universe and from the Star Wars franchise. This blockbuster film slate has helped Disney command a top spot at the box office for several years running, and that trend is likely to continue.

This list is hardly exhaustive, and it also doesn't include two new Star Wars trilogies. With a pipeline like that, it's hard to bet against the company.

Another reason to like Walt Disney is the vertical integration of its theme parks, merchandise sales, TV networks, and movie production prowess. That gives the company a leg up on other entertainment companies over the long term.

And Disney is about to add another layer to that integration: direct-to-consumer online video streaming. Last year, it acquired majority ownership in online streaming technologist BAMTech for over $1 billion. This spring, that new asset will be leveraged to bring consumers the ESPN Plus sports streaming app, a first-of-its-kind service in the U.S. That could help the company bolster what has otherwise been a struggling segment over the last few years.

In addition to ESPN Plus, Disney is also gunning for Netflix. BAMTech will be used to launch another streaming service in 2019 that will feature Disney's extensive catalog of movies and TV series across all of its brands. The deal is far from finalized, but Disney also agreed to acquire entertainment assets from Twenty-First Century Fox for $52 billion late last year. It's likely that deal was struck to bolster the breadth of content Disney can offer on that second streaming service, while giving the company even more control over the global box office.

What's good for the economy ...

About those theme parks: In 2017, that segment of the business was a growth leader with revenue and operating income increasing 13% and 21%, respectively, during the fourth quarter.

There are Disney parks and resorts in leading markets around the world, and they're benefiting from global growth. Markets in Europe and Asia are strong, and for the next two years, the International Monetary Fund sees global growth accelerating to 3.9% each year.

When consumers feel confident about the economy and have extra cash, they often go on vacation. That trend could provide a tailwind for Disney's theme parks. To keep its resorts top-of-mind for vacationers, further investments are being made to open new attractions and renovate existing ones. For example, Disney will be building new Star Wars lands in 2018 at a cost of about $1 billion.

So after several years of pessimism surrounding the company and with the stock still down from all-time highs, I took the opportunity to add to my position. Management has reiterated its intention to repurchase $6 billion worth of stock in the year ahead. Clearly, they believe the business is a worthwhile investment -- dumping billions into new operations and stock repurchases -- and I think it's a good buy, too.