The chipmaker is moving in the right direction, but it's unclear whether investors will send its shares upward to reflect its improving financials.

Advanced Micro Devices (AMD -1.06%) performed well financially in 2017, but that wasn't enough to get investors excited about its stock. The company moved back into profitability and grew its sales by high double-digit percentages, but its share price tumbled 9% for the year.

The company has lots of potential in both the computer processing unit (CPU) and graphics processing unit (GPU) markets but faces stiff competition from rivals Intel (INTC 0.05%) and NVIDIA (NVDA -1.50%). Those competitors are unlikely to give up their strong positions, so AMD's share price is liable to remain volatile this year. Let's dive in and see exactly what's happening. 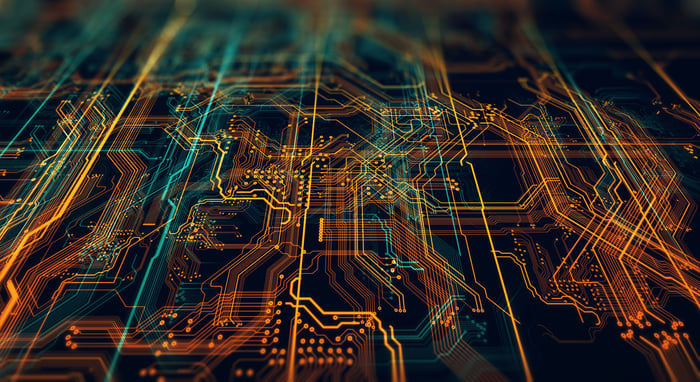 How AMD is doing

AMD just reported its fourth-quarter 2017 and full-year results, so let's start with the good news. The company's revenues grew by an impressive 34% from the year-ago quarter to $1.48 billion, and full-year revenue jumped 25% to $5.3 billion. Non-GAAP earnings per share came in at $0.08, which easily beat analysts' consensus estimate of $0.05, and marked the third consecutive quarterly beat for AMD.

Operating income skyrocketed from a loss of $3 million in Q4 2016 to a gain of $82 million in Q4 2017. The jump came mainly from the company's computing and graphics segment, where sales popped 60% year over year. That indicates that AMD's Radeon graphics and Ryzen desktop processors are taking root in their respective markets, which could drive further growth in processor sales this year.

Additionally, AMD's EPYC data center processors are starting to make some headway with major clients. Microsoft became the first global cloud provider to use AMD's new chip, and Baidu also added it to some of its artificial intelligence and cloud-computing data centers.

Those bright spots didn't translate into share price gains last year, but since the beginning of 2018, the company's stock price is up about 34%. So can the company keep the good times rolling?

This is still a big unknown

I have to balance out all of this good news by pointing out some of AMD's practical problems. First, even though the company has made some gains in both the desktop processor and graphics card markets, it's still going up against two huge competitors in those markets. Intel reigns supreme in the data center space with its nearly 97% share of the market. AMD's management has said that it aims to take double-digit market share in data centers in 2018, but that will mean wrestling it away from Intel -- not an easy task.

AMD is making strides in the GPU space as well, but that arena is mostly dominated by NVIDIA. That company has been able to consistently enter new markets -- think AI, driverless cars, and gaming consoles -- with its GPUs, and it's making a bundle doing it. In its fiscal Q3 2018, NVIDIA's gaming GPU sales jumped 25%, and its data center segment sales popped 108%. NVIDIA also stepped on AMD's toes last year when its Tegra X1 system on a chip won a spot in the Nintendo Switch. Gaming consoles have traditionally been AMD's market, but NVIDIA appears to be challenging that idea.

There's also some uncertainty around AMD's business of selling GPUs for cryptocurrency mining and blockchain processing. CEO Dr. Lisa Su said sales of graphics processors for those purposes accounts for a "mid-single digit percentage" of the company's annual revenue. Su sounded optimistic about GPU sales for this market, but downplayed it at the same time, noting that most the company's growth is "outside of the blockchain market."

I think Su's comments send mixed signals to investors. It sounds as if AMD wants investors to get excited about how its hardware can tap into the cryptocurrency trend but is trying to distance itself from it at the same time because of the space's inherent volatility. You can't have it both ways. Management should try to be more clear about whether it thinks there's a significant upside for the company from cryptocurrency, or whether it's just a blip on AMD's radar.

AMD appears to be on the right track for 2018, but it's hard to say whether investors should expect strong share price gains this year. The company had performed admirably last year, but investors didn't value it accordingly. Yet in the previous year, AMD's share price grew a staggering 295%. This share price volatility makes me leery about AMD experiencing strong gains this year. One thing's for sure though, it would be a nearly impossible task to match 2016's mountainous gains.