The commercial property sector had a strong end to 2017, and sentiment remains positive.

Earnings reports from commercial property services company Jones Lang LaSalle (JLL -0.20%) are always an interesting affair, not least because the company doesn't give formal guidance, and thus the results can create a lot of volatility in the stock. JLL's recently reported fourth quarter was a strong one, and the company is entering its fiscal 2018 with a lot of momentum. Let's take a closer look at the earnings report.

Focusing on the headline numbers from the quarter:

In the first half of 2017, Jones Lang LaSalle saw a combination of double-digit revenue increases and declines in adjusted EBITDA, but in the the second, double-digit revenue growth fell through into strong growth in EBITDA. The chart below shows the progression through the year. 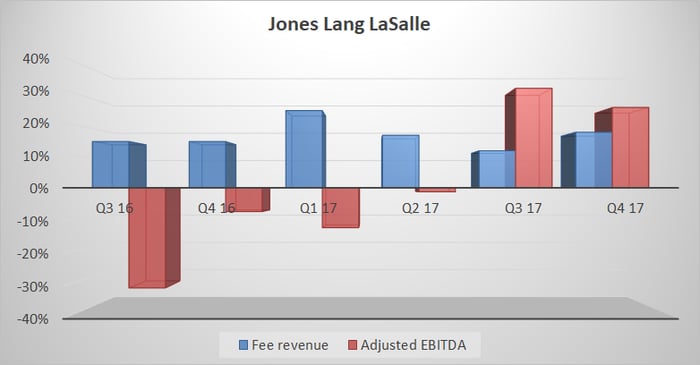 In case you're wondering why the second half was so much better than the first, it's due to a combination of reasons. They include investments in data and technology intended to support future growth; lower incentive fees at Jones Land LaSalle's real estate investment company, LaSalle Investment Management; and margin dilution due to integrating acquisitions. 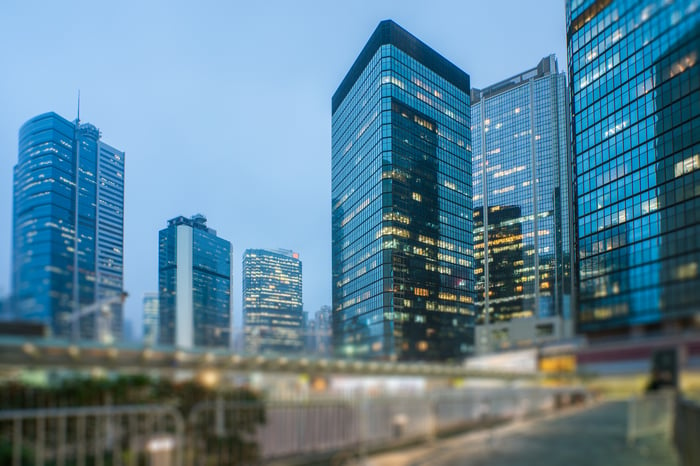 Jones Lang LaSalle's revenues are global and are split between real estate services (RES) and LaSalle, so it's always useful to break out revenue and adjusted EBITDA by business segment. As you can see below, the laggard in the quarter was Europe, but that was largely due to the dilutive effects of the acquisition of Integral (a U.K.-based mechanical and electrical property maintenance company) and the associated integration costs and investments.

On the earnings call, CEO Christian Ulbrich said that it was a "very positive year for commercial real estate and for JLL," and that "we believe these conditions will continue into 2018."

He went on to state that he'd "never experienced such a broad-based optimism" regarding the economy and business leaders' confidence. Ulbrich spoke of a "massive urgency" among clients for closing deals in December -- something that pulled deals forward from the first quarter of 2018.

It's difficult to attribute a one-month uptick in business to any particular reason, but Ulbrich speculated that it could come down to businesses anticipating stronger growth prospects going forward as a result of tax reform in the U.S.

The question for the commercial real estate market and Jones Lang LaSalle in 2018 is whether the positive impact of stronger economic growth could be offset by the possibility that rising interest rates will make it more expensive to fund deals. Ulbrich still thinks that the "absolute level of interest rates" is low on a historical basis and that "real estate is still a super attractive" investment class. Provided businesses and investors feel the same, Jones Lang LaSalle can have another strong year.