Please ensure Javascript is enabled for purposes of website accessibility
Log In Help Join The Motley Fool
Free Article Join Over 1 Million Premium Members And Get More In-Depth Stock Guidance and Research
By Danny Vena - Feb 9, 2018 at 6:43AM

Netflix showed its vast understanding of guerrilla marketing by taking a new approach to a time-honored tradition -- and generating a ton of buzz in the process.

The advertising that occurs during the Super Bowl has become almost as iconic as the game itself. When the Big Game made its TV debut in 1967, the accompanying ads hadn't yet become the cultural touchstone they are today. Although opinions differ, it was sometime in the early 1970s that advertisers began to ramp up their offerings for the game-time ads. It wasn't until the release of Apple's groundbreaking 1984 commercial that same year that the ads became a phenomenon and an event unto themselves.

Streaming giant Netflix (NFLX 5.03%) captured a massive amount of buzz when it dropped a trailer at the end of the first quarter for the J.J. Abrams-produced The Cloverfield Paradox, the third installment in the sci-fi trilogy. Seeing movie trailers during the Super Bowl is nothing new, but Netflix turned the paradigm on its head by revealing that viewers could watch the movie just hours later -- right after the end of the game. 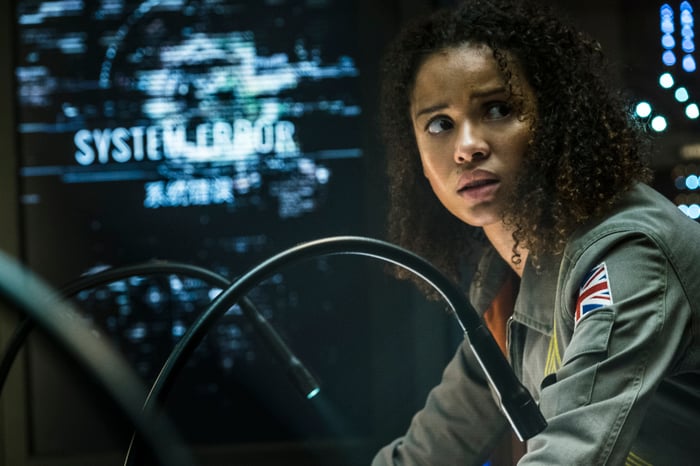 Netflix generated hug buzz for The Cloverfield Paradox by rolling out the debut of the thriller right after the Super Bowl. Image source: Netflix.

It is well established that the television network that shows the Super Bowl will typically try to hijack viewers by airing a special episode of a highly rated program or launching a long-awaited new series. Netflix turned this practice on its head by offering fans a much-anticipated movie that had seen no previous advertising and made it available immediately after the game.

Viewers are deeply divided about the movie itself, which was alternately described as mind-blowing, horrifying, or just plain terrible. That is, however, beside the point. The quality of the movie (or lack thereof) doesn't detract from the brilliant strategy and execution by Netflix, drumming up interest by taking a time-honored tradition and adapting it to work for streaming television.

The move generated a massive amount of attention. "No other streaming service has ever pulled off this type of stunt, nor released a movie with such immediacy. Millennial audiences love surprises and this type of marketing maneuver is right up their alley," according to Deadline Hollywood, calling Netflix's action a "groundbreaking, unprecedented move."

"The stunt nature of this release alone is enough to generate the kind of social media buzz money can't even buy," said Vanity Fair.

Netflix's first foray into Super Bowl advertising came last year, when the company released a trailer for the second season of its smash hit Stranger Things. That commercial generated the most buzz of any ad seen during the game.

Netflix CEO Reed Hastings has been encouraging his team to take more chances, saying last year, "We have to take more risk; you have to try more crazy things." Apparently the marketing team took that advice to heart.

Netflix has taken some big swings in the past year. The release of the David Ayer-helmed Bright is reportedly one of the company's most costly bets to date, at an estimated $90 million. The company also made the first acquisition in its history, bringing comic book producer Millarworld into the fold, and has recently signed celebrated producers Shona Rhimes, Jenji Kohan, and Shawn Levy.

Moves like this are paying off. When Netflix recently announced its fourth-quarter and full-year 2017 financial results, the company's subscriber growth soared past its own ambitious forecasts. Netflix added 1.98 million domestic subscribers, up 10% year over year, and outpacing its estimate of 1.25 million. International subscribers grew by 6.35 million, up 41% over the prior-year quarter and vastly exceeding its expectations for 5 million new subs.

Netflix's ability to "take more risk" may result in a higher failure rate, but it will also produce worldwide hits like Stranger Things, 13 Reasons Why, and GLOW.