Netflix just made a "kick-ass" acquisition to expand its library of assets and gained one of the most iconic names in comic books in the process. Is Netflix becoming a smaller version of Disney?

If you're looking to become a multi-media powerhouse, why not emulate one of the most storied companies in the world, one whose vast vault of intellectual property is matched only by its ability to generate seemingly endless opportunities to monetize those assets?

The Walt Disney Company (DIS -0.15%) is well known for making strategic acquisitions to expand its empire of characters, including Lucasfilm, the studio behind Star Wars, animation giant Pixar, and iconic comic book creator Marvel. The company has been able to parlay its characters into blockbuster movies and television shows, theme park attractions, and all manner of consumer products. Disney has generated nearly $12 billion in box office alone with its Marvel Cinematic Universe.

Video streaming powerhouse Netflix, Inc. (NFLX 0.94%) broke 20 years of tradition and made its first ever acquisition of comic book house Millarworld, gaining the talent of its founder and creative force Mark Millar. While Millar may not be a household name to those that aren't fervent comic books readers, even casual fans and moviegoers will be familiar with his work, which served as the basis for such blockbusters as Captain America: Civil War, The Avengers, and Logan, which have generated a combined $3 billion in ticket sales.

A wellspring of stories and relatable characters

Millar has a long history of creating characters that translated well to the big screen and has penned the stories that gave birth to such movies as Kick-Ass, Wanted, and Kingsman: The Secret Service. Millar is excited about his future with Netflix:

The moment Lucy and I walked into Netflix's headquarters in California last Christmas we knew this was where we wanted to be. It instantly felt like home and the team around that table felt like people who would help us take Millarworld's characters and turn them into global powerhouses. Netflix is the future and we couldn't be more thrilled to sell the business to them and buckle up for all the amazing movies and television shows we plan to do together.

Millar is one of the most influential writers of modern comics and Netflix chief content officer Ted Sarandos compared him to one of the most respected names in the realm -- Stan Lee:

As creator and reinventor of some of the most memorable stories and characters in recent history, ranging from Marvel's The Avengers to Millarworld's Kick-Ass, Kingsman, Wanted, and Reborn franchises, Mark is as close as you can get to a modern day Stan Lee. We can't wait to harness the creative power of Millarworld to Netflix and start a new era in global storytelling.

Netflix has already won critical acclaim and fan approval for its portrayal of several of Marvel's troubled heroes, including Daredevil, Jessica Jones, and Luke Cage. There are high hopes among fans that the company will have similar success with Millar's creations like Reborn and Jupiter's Legacy.

No doubt Netflix is already making plans to integrate Millar's creations into its library of worldwide content. The company plans to spend $6 billion on programming in 2017, and this acquisition offers another source of rich characters for Netflix original series, movies, and children's programs. As Netflix's storehouse grows, the ways in which it can generate revenue from that library increases as well, a process that Disney practically invented.

This isn't the first time Netflix has taken cues from the entertainment juggernaut. Earlier this year, the company was looking to hire a merchandising and promotion manager to supervise the licensing of products related to Netflix's most popular shows, including books, comics, toys, and apparel. Having Millarworld will dovetail nicely into those aspirations, providing a comic outlet for its stories, while Millar's creations provide Netflix with a continuing stream of content.

Even before this acquisition, analysts posited that Netflix could generate more than $1 billion in annual revenue selling merchandise related to its original programs. The pipeline of characters and content provided by Millar and company and its existing infrastructure could take that to the next level. If you don't think so, walk into the clothing department of any department store and see how many superhero items you spot. 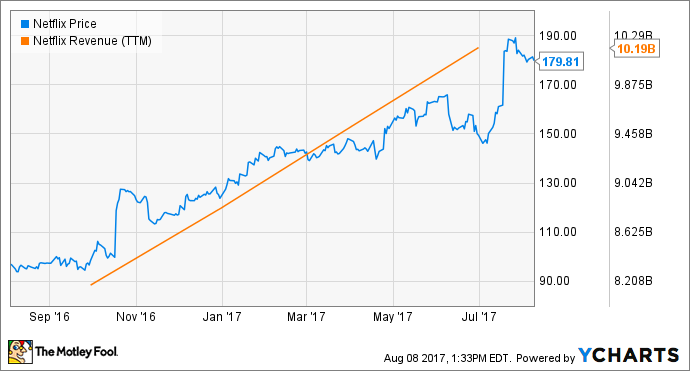 While this acquisition was an unexpected move by Netflix, it is perfectly in keeping with the company's objective of creating quality content that translates to audiences around the world. Netflix recently crossed the threshold of 100 million worldwide subscribers, and many believe that is just the beginning. The Disney vault was already brimming with beloved characters before the company opened its first theme park in 1955. Netflix has only just begun its foray into owned content and building its library, providing plenty of opportunities to learn from the master.

Netflix generated more than $10 billion in revenue over the previous year, and its stock is near record highs. While its negative cash flow remains a concern with many investors, its rapidly growing subscriber base and laser focus have served the company and investors well thus far, and my money is on Netflix. I wonder if there's a theme park in its future?