Please ensure Javascript is enabled for purposes of website accessibility
Log In Help Join The Motley Fool
Free Article Join Over 1 Million Premium Members And Get More In-Depth Stock Guidance and Research
By Danny Vena - Feb 10, 2018 at 8:31AM

The promised transformation is ongoing, but things had to get worse before they can get better.

Investors looking for a turnaround to materialize for Mattel, Inc. (MAT -1.16%) would be forgiven for losing patience. The company has posted four consecutive years of sales declines with no relief in sight, causing Mattel to suspend its dividend in late 2017. Mattel has struggled on a variety of fronts, failing to keep up with changes in play habits, the loss of The Walt Disney Company's (DIS -0.28%) Princess and Frozen lines, and the falling popularity for its flagship Barbie.

The recent bankruptcy filing by retail outlet Toys R Us sent the toymaker reeling going into its all important holiday season. The retailer is Mattel's second largest customer and generates between 15% and 20% of the company's U.S. sales, along with 11% of international revenue.

There was no respite to be found in the most recent quarter, as things went from bad to worse. 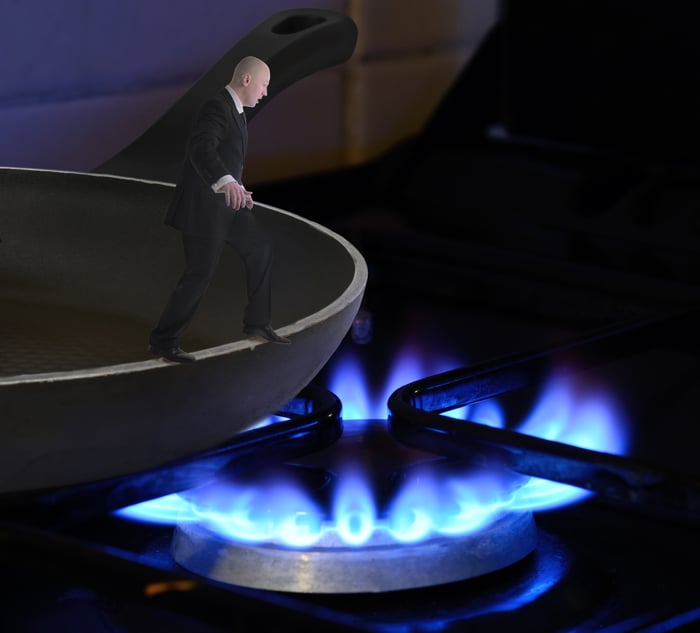 Out of the frying pan...

For the fourth quarter of 2017, Mattel's net sales of $1.6 billion declined 12% year over year, below analysts' consensus estimates of $1.69 billion. The company posted a net loss of $281 million, down 262% year over year, resulting in a per-share loss of $0.82, compared with a $0.51 profit per share in the prior-year period, and far worse than the $0.15 per share profit analysts expected.

In North America, which accounts for the majority of Mattel's business, fourth-quarter sales fell 17% from the prior year. International sales fell 4% as reported, and 9% on a constant currency basis.

Cost of sales skyrocketed to 69% of revenue, up from 53% in the prior-year quarter. Mattel attributed the worsening gross margin to inventory management, an unfavorable product mix, and higher freight and logistics expenses.

...And into the fire

For the full year, Mattel lost a massive $1.05 billion, or $3.07 per share. It is important to note that the company took a $457 million charge related to recently enacted U.S. tax legislation. Excluding the effect of this one-time charge would have reduced Mattel's net loss for the year to $1.08 per share.

Declining sales were widespread across most categories. Revenue from the construction arts and crafts brands fell 25% year over year, while American Girl sales fell 23%, and Fisher-Price sales dropped 12%. Revenue in the other girls segment fell by 35% year over year, while the wheels segment fell 7%. The bright spot was increased sales of Barbies, which increased 9% over the prior-year quarter.

We have taken aggressive action to enter 2018 with a clean slate so that we can reset our economic model and rapidly improve profitability. We are optimistic about stabilizing revenue in 2018 anchored by our key power brands, entertainment partnerships, and exciting new launches. We continue to gain momentum toward the medium-term goals we shared at our June Investor Day.

Where do they go from here?

Mattel has been working to revive its flagging business. The company announced details for its "transformation plan" at an investor day in June of last year, which includes reducing costs by $650 million, the majority of which the company hopes to achieve in 2018. Unless the company is able to revive its falling sales, the rest will be academic.

There are a couple of other things that may be of interest to shareholders. In an effort to finally develop a successful digital game strategy, Mattel is partnering with Chinese video-game publisher NetEase, Inc. (NTES -1.28%). The companies announced a joint venture called Mattel163, which will work to create games and digital experiences based on Mattel's iconic brands. The companies have yet to release any details on the arrangement.

There were also reports late last year that competing toymaker Hasbro, Inc. (HAS -0.36%) had made a bid for Mattel, though those stories remain unconfirmed.

It seems even the rumors are better than the news. As a Mattel investor, I wish it wasn't so.

Mattel Struggles As Barbie Gets Dumped