Please ensure Javascript is enabled for purposes of website accessibility
Log In Help Join The Motley Fool
Free Article Join Over 1 Million Premium Members And Get More In-Depth Stock Guidance and Research
By John Ballard - Feb 11, 2018 at 11:50AM

EA put those concerns to rest with robust earnings from its live digital service. Investors cheered the news, sending the stock price up 9% to a new all-time high immediately following the news. What's more, we gained an important insight in how management is forecasting sales of the Star Wars franchise, which could set up some nice surprises in later quarters. 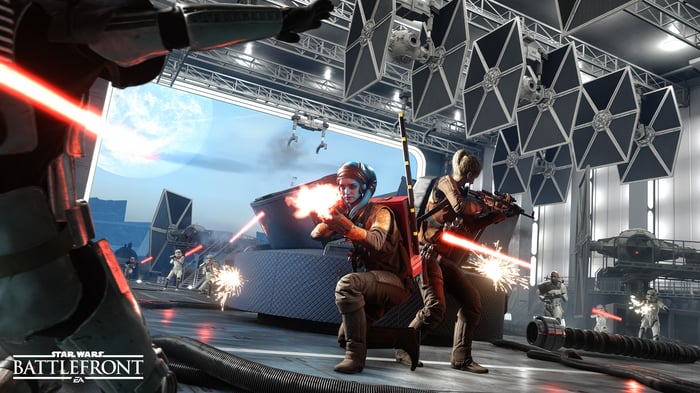 Player engagement was through the roof

The first Star Wars: Battlefront sold 13 million units, and management had much lower expectations than that for the sequel.

CFO Blake Jorgensen said: "For Q3, we had expected to sell about 8 million units, but we fell short of that by less than 1 million units. However, this shortfall was significantly offset by excellent performance from our live services."

The quarter demonstrated EA's strength derived from a diverse lineup of games that kept players engaged through live service offerings, which include digital add-on content, subscriptions, and advertising.

One of the key contributors to EA's live service revenue is the digital in-game card feature called Ultimate Team, which grew its user base by 12% year over year across EA Sports titles. This virtual card game continues to be very popular, and because it generates revenue from sales of in-game digital card packs, it's very profitable for the company.

Here's how Jorgensen characterized the impact that Ultimate Team is having on the business: "People start to think about FIFA as really Ultimate Team more than they do the underlying game itself. It's so exciting for people because it's constantly changing, and it has new and exciting events every single week to bring people back."

That's the name of the game these days with video game companies: Distribute deeply engaging gaming experiences, and then get players to spend additional money on in-game features like EA's Ultimate Team. It creates a very lucrative, more predictable stream of revenue.

Strong performance from Ultimate Team and the launch of a major expansion update for The Sims 4 on console helped live service revenue grow 39% year over year for the fiscal third quarter. Over the last 12-month period, live service revenue has grown 30% and made up 39.9% of EA's total net revenue through the quarter ending Dec. 2017.

A huge uproar from gamers and subsequent weak sales of Star Wars: Battlefront 2 turned out to be a minor issue. The reason wasn't only better-than-expected growth in live services but that management never baked in very much Star Wars revenue in its guidance.

During the earnings call, Jorgensen said, "We're inherently conservative in how we try to forecast. And we did not build very much revenue at all into this year's forecast for Star Wars."

He went on to explain that until they have a "proven model" of how they will distribute Battlefront 2's live service offerings to gamers, they will continue to be conservative in their guidance going forward.

But those players who did buy the game seem to have enjoyed the gaming experience. CEO Andrew Wilson said, "With the breadth and depth of the game, fans spent twice as much time playing Battlefront 2 over the previous game during the launch quarter."

Battlefront 2 delivers a ton of licensed Star Wars content from Walt Disney, making the franchise a huge draw for fans. EA already has plans to address gamer feedback in the short term. Given the strong engagement from those who own the game, Battlefront 2 could deliver upside to future quarters once management gets the live service part figured out and as gamers who are on the fence decide to buy the game.

Owing to the momentum in live services, management raised its full-year guidance for GAAP revenue to between $5.075 billion and $5.1 billion. Management also disclosed that the stronger-than-expected growth in live services will cause the sales mix to weigh more toward digital than physical in the fiscal fourth quarter, which will provide an extra bump to profits.

Overall, EA is set to keep the momentum going through calendar 2018, with esport competitions taking place across Madden, FIFA, and Battlefield; more new games launching across all platforms; and the upcoming World Cup, which should create more interest in FIFA 18.