The fitness tracker company is scheduled to report earnings Feb. 26. Here are key measurements of its health.

For many consumer-tech companies, the fourth quarter is a crucial barometer of how the company is doing. With new products introduced in time for the holiday selling season, this all-important quarter can make or break a company's year. With Fitbit (FIT) finishing it's self-described "rebuilding year," having released its first smartwatch in time for the holidays, and projecting that 35% of the company's 2017 revenue will come from Q4, the company's report on the fourth quarter is an important one for the fitness tracker company. That report is due Feb. 26.

Here are the four questions investors should be asking.

1. Are customers buying the Ionic?

CEO James Park called the company's new smartwatch product, the Ionic, "the largest R&D investment in the company's history." With big bets come big expectations. All ears will be tuned to what management has to say about Ionic sales. But investors looking for specifics might be disappointed.

In the past, the company hasn't shared specific product sales data during its earnings calls with analysts, and it likely won't this time, either. However, with a sequential revenue growth projection of 45%, it's crucial that the smartwatch sell up to the company's internal targets.

In January, at the Needham Growth Conference, Tom Hudson, vice president of investor relations, answered an analyst's question about the initial sales of the Ionic from the fourth quarter by saying: "... but specificity in terms of sell-through for Ionic devices, I just can't provide that. ... What I can tell you is that one quarter's success or failure of Fitbit moving down the path toward smartwatches is not going to be predicated on Ionic sales."

Having a Fitbit executive downplaying the first quarter of the company's flagship product is somewhat concerning. While the long-term health of the company doesn't depend on this quarter's sales of the smartwatch, the short-term stock price could take a hit if the company fails to meet its revenue projection for the quarter.

2. Is inventory under control?

Fitbit reports revenue when it sells its product to its retail partners, but the story doesn't end there. If retailers don't end up selling the trackers to customers, it would spell trouble for the company. In Q4 2016, Fitbit significantly overestimated demand for its trackers and ended up taking $178 million in charges due to rebates, return allowance, and scrap. The company's revenue was impacted for the next several quarters while the channel inventory dropped back to normal levels.

I'll be looking to see that the company learned its lesson and that inventory is under control. Any weakness here could further extend Fitbit's timeline posting year-over-year revenue growth. 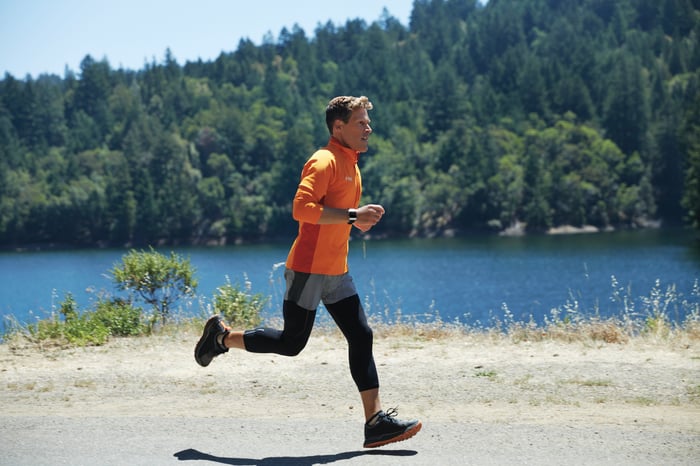 3. Is the company growing internationally?

While retail bankruptcy filings in the U.S. dominated headlines throughout 2017, Fitbit was able to make progress in growing its international business. Sales outside the U.S. were 38% of revenue in Q3, up from 29% a year ago. Companies that are more diverse internationally are able to compensate for weaknesses in a specific region. While overall international revenue is on the rise, Fitbit hasn't made much headway in China, which is reported as part of its Asia-Pacific (APAC) region. A partnership with Adidas is expected to help improve its position in the country. The APAC region made up only 8.8% of total sales in the most recent quarter.

Further progress internationally -- specifically in China -- is a key for Fitbit to get back to being a growth business.

4. Can the company be profitable?

Park has committed to getting the company back to growth and profitability. While the company is projecting its non-GAAP earnings to potentially be positive, I prefer to look at the company's GAAP (unadjusted) operating income, which is income before taxes and interest expenses and shows investors whether the underlying business is profitable. This number has been negative the last four quarters, but heading in the right direction. Investors may have to look through the SEC filing to get this number, but it's important to understand whether this company can be profitable in this competitive market.

There's a lot riding on this earnings report for Fitbit. Positive news on the company's flagship product, retail sell-through, international growth, and profitability could mean that the company is on the mend for 2018. Misses on any of these key metrics would mean that investors have even longer to wait for a Fitbit comeback.