Please ensure Javascript is enabled for purposes of website accessibility
Log In Help Join The Motley Fool
Free Article Join Over 1 Million Premium Members And Get More In-Depth Stock Guidance and Research
By Keith Speights - Feb 11, 2018 at 8:07AM

The president deserves some of the credit. But not all of it.

Donald Trump was sworn in as the 45th U.S. president on Jan. 20, 2017. Even before he took office, then President-elect Trump took to Twitter to proclaim gains in the stock market following his election. In the first year following his inauguration, though, the stock market performed even better, with the S&P 500 index rising 23% and the Dow Jones Industrial Average gaining over 30%.

But those gains didn't come close to matching what biotech stocks achieved. The SPDR S&P Biotech ETF (XBI -3.91%), which seeks to track the performance of the S&P Biotechnology Select Industry Index, soared nearly 41% during President Trump's first year in office.

Why have biotech stocks performed so well with Trump in the Oval Office? There are several factors -- some for which the president can take some credit, and others for which he can't. 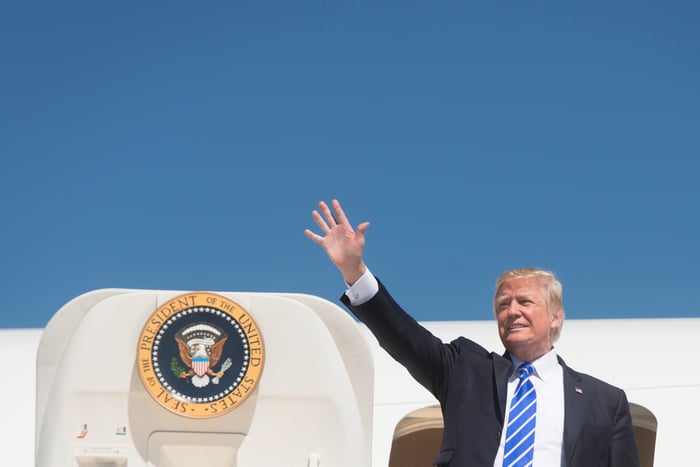 It's important to remember that the prospects for biotech and pharma stocks under a Trump administration didn't always seem so bright. Five days before taking the oath of office, then President-elect Trump stated publicly that drugmakers were "getting away with murder." He went on to state his intention to "create new bidding procedures for the drug industry," adding that "we're going to save billions of dollars over a period of time." Those comments caused many biotech and pharma stocks to tank.

President Trump tweeted a couple of months into his presidency that he was "working on a new system where there will be competition in the drug industry." The tweet reiterated his earlier promise of lower drug prices, writing, "Pricing for the American people will come way down!"

However, no changes were made that would affect drug pricing during President Trump's first year in office. This was a relief to biotechs and pharmaceutical companies. These companies were also pleased with a draft executive order floated in the summer of 2017 that gave them several things they wanted. The executive order has yet to be signed, however.

The biopharmaceutical industry was also happy with President Trump's pick to run the Food and Drug Administration (FDA), Scott Gottlieb, who sat on the boards of several small biotechs. After the resignation of Tom Price as secretary of health and human services (HHS), President Trump chose former Eli Lilly executive Alex Azar to take his place -- another reassuring move.

Overall, President Trump's actions spoke louder than his words during the first year of his administration. This helped to give a stability to the biopharmaceutical industry that paved the way for those huge stock gains. 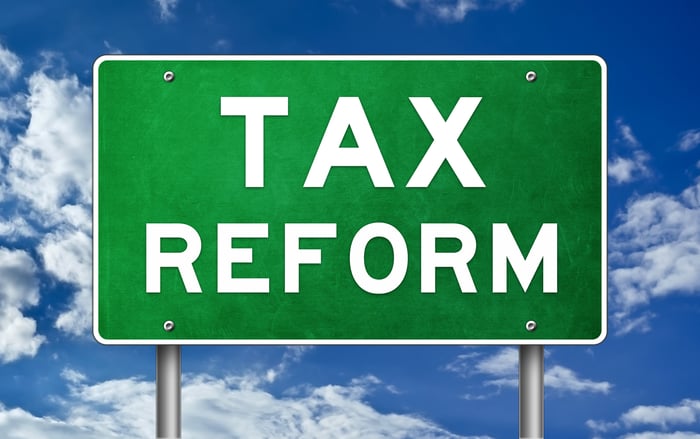 Another action that excited many drugmakers was the promise of tax cuts, and particularly the opportunity to bring cash parked overseas back into the U.S. at lower rates. In December, President Trump signed tax legislation that achieved those goals.

Tax reform benefited nearly every biotech. The biggest ones, though, were probably the happiest. AbbVie (ABBV 0.73%), for example, expects to see an effective tax rate of around 13% over the next five years. In addition, the company announced that it was bringing a lot of its overseas cash back into the United States. AbbVie said it would invest $2.5 billion over the next five years in capital projects in the U.S. and contribute roughly $350 million to charities in 2018.

Of course, the tax reform legislation wasn't signed into law until Dec. 22, 2017. Most of the gains biotech stocks achieved were made before then. However, stocks usually move as much on anticipation of what could happen as much as they do on what has actually happened. At least some of the nice gains for biotech stocks during the first year of President Trump's term were likely driven by the expectation and ultimate realization of meaningful tax reform.

While President Trump does deserve some credit for biotech stocks' tremendous performance, he can't get all of the credit. There were bigger stories that drove biotech stock prices higher in 2017 and early 2018.

AbbVie ranks among the top holdings in the SPDR S&P Biotech ETF. The big biotech's share price skyrocketed 70% during President Trump's first year in office. But much of AbbVie's impressive gain came from continued success for Humira and Imbruvica. In particular, AbbVie forged a deal with Amgen that cleared the way for Humira to enjoy protection from biosimilar competition in the U.S. for several more years.

A couple of other top holdings in the ETF, bluebird bio (BLUE -8.12%) and Juno Therapeutics (JUNO), saw their stocks rise 169% and 245%, respectively, during the first year of the Trump presidency. Both small biotechs captured investors' attention because of their promising CAR-T therapies. It also helped that Gilead Sciences (GILD 1.08%) acquired Kite Pharma, another biotech focusing on CAR-T. Celgene announced that it was buying Juno two days after the end of President Trump's first year in his term.

It's possible that the potential for tax reform made Gilead more likely to acquire Kite, a move that helped lift the stock prices of Bluebird and Juno. However, both of these biotech stocks had risen close to 50% or more even before Gilead's acquisition announcement. Also, there was still a good chance that tax reform wouldn't go through when Gilead decided to buy Kite.

These are just a few examples. Plenty of biotechs won regulatory approvals and reported great clinical results that contributed heavily to their successes in the first year of the Trump administration.

Another great year on the way?

You might wonder if the market pullback in recent days put a big damper on the performance of biotech stocks so far in President Trump's term. It didn't. The SPDR S&P Biotech ETF is up by nearly 45% since President Trump was sworn in, despite the market's wild ride over the last week.

I wouldn't necessarily count on the second year under President Trump to be as good for biotech stocks as the first year. In his first State of the Union address a few weeks ago, President Trump referred to cutting the high prices for prescription drugs as one of the "greatest priorities" for his presidency. He promised that "prices will come down."While it's true that President Trump has made similar statements in the past with no tangible results, I wouldn't rule out the possibility that there could be changes on the way that could negatively impact some biotech stocks.

However, as was the case during his first year in office, there are always bigger stories at play. Acquisitions, new product launches, and pipeline progress will probably make the bigger difference in what happens with biotech stocks this year and well into the future.