Customers have been waiting for a move that disrupts the grocery industry since the e-commerce giant took over Whole Foods.

Since Amazon.com (AMZN 1.54%) took over Whole Foods Market last August, competitors and customers have been anticipating the e-commerce giant's disruption of the grocery industry. Amazon tinkered with lower prices and added its pick-up lockers to the supermarkets, but it wasn't until last week that the company launched the kind of disruptive gambit that it's known for.

Amazon said it would offer free two-hour delivery from Whole Foods stores for orders of $35 or more to Prime members through its Prime Now program. The program started last week in neighborhoods in Austin, Cincinnati, Dallas, and Virginia Beach, and Amazon plans to expand it across the country over the rest of the year. Prime customers will also be able to get orders in less than an hour for a $7.99 fee.

The move amplifies Amazon's longheld intentions to break into the grocery market, as it has tried to do for a decade with Amazon Fresh. However, the Whole Foods Prime Now program is a clear improvement over Amazon Fresh, as it offers similar benefits without the $15/month price tag of Fresh and carries the Whole Foods brand along with the quality and customer trust that represents.

Since most Americans are already Prime members, it seems like Amazon has found a way to ensure free, fast grocery delivery to anyone who lives within a reasonable distance of a Whole Foods Market. That could be a problem for its competitors. 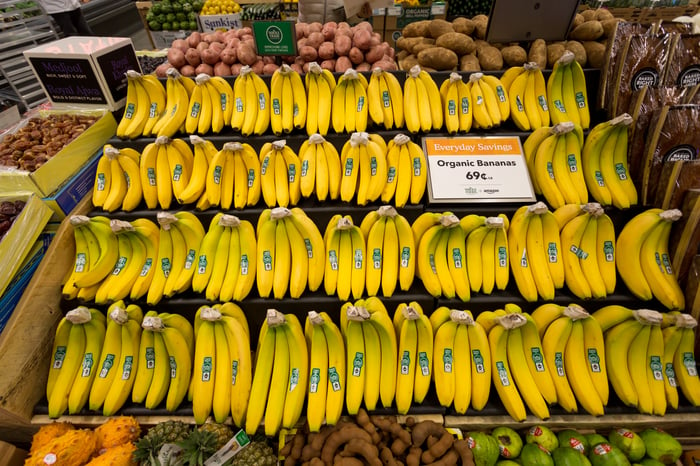 What's a supermarket to do?

The nation's biggest grocery sellers, Walmart, Kroger, and Costco Wholesale, have mostly rejected grocery delivery. Walmart and Kroger have instead invested in grocery pickup capabilities for online orders, and both seem happy with that solution thus far. Walmart, which has already opened 1,000 grocery pickup locations, plans to add another 1,000 this year. Kroger opened its 1,000th ClickList location, its name for its grocery pickup program, in December and the company plans to bring the feature to all of its nearly 3,000 supermarkets.

Both companies are seeing strong growth from those digital initiatives, but have avoided focusing on deliveries, instead seeing online pickup as a way to compromise on costs and convenience. Such a service provides the convenience of online ordering and easy pickup without the cost of delivery to the provider.

Costco, meanwhile, is just beginning to experiment with e-commerce, launching free two-day shipping for non-perishables with a $75 order minimum and partnering with Instacart to offer same-day delivery. Kroger has also offered same-day delivery through Instacart, while Walmart is currently in the midst of testing its own grocery delivery pilot, teaming up with Uber to fulfill orders in Orlando and Dallas.

Target, which may have the greatest overlap with Whole Foods locations, has taken a different approach, aggressively going after the delivery market with its acquisition of Shipt late last year.  With the help of Shipt, an Instacart competitor, same-day delivery, including groceries, will soon be available at half of Target stores. However, groceries make up a significantly smaller percentage of Target's sales than they do at Walmart, Kroger, and Costco.

Instacart, the leader in online grocery delivery, has for years been a foil for Amazon Fresh and it just raised $200 million at a $4.2 billion valuation, according to Bloomberg. The company partners with dozens of supermarket chains to offer same-day delivery of groceries for a one-time fee of $5.99 or higher, depending on the speed of the delivery and size of the order. Customers can also get free deliveries with Instacart Express, a membership plan for $149 a year or $14.99/month.

That was a similar price to Amazon Fresh. However, with the new Prime Now offer, Amazon's value proposition is much better for Prime members -- Whole Foods groceries in two hours at no extra charge. For customers who live within the delivery area, it seems hard to justify paying for Instacart with that kind of competing offer.

As a result, Instacart may have to find a way to lower prices, or work with supermarkets to find a way to compete with Amazon's Prime Now offer. For Amazon, the new program will probably make a dent in its bottom line because delivery is expensive, but the company said in its recent earnings call that it believes investing in shipping costs is a way to gain a competitive advantage.

For now, it's not clear how much traditional supermarket chains are threatened by Amazon's free delivery and it will largely depend on how many people eventually have access to it. There are fewer than 500 Whole Foods stores nationwide, so Amazon won't be a direct threat to most Walmart and Kroger locations as those two companies have thousands of stores each. But Amazon's rivals would be foolish to ignore it. Despite the benefits of online grocery pickup, it may not be enough to compete with free delivery, especially from a company that only seems to care about market share and not profits.