The e-commerce giant is looking to improve local processing on Echo devices.

It's now been nearly eight years since Apple (AAPL 2.54%) unveiled its first custom processor, the A4. The Mac maker's silicon ambitions have expanded unabated ever since, and Apple now designs more custom chips than ever before. Alphabet subsidiary Google followed suit last year with its first custom chip, an image processor called the Pixel Visual Core found inside the Pixel 2. Google had poached a chip architect from Apple a few months prior, suggesting that there's more where that came from.

Amazon.com (AMZN 4.11%) is now reportedly the most recent tech giant to be pursuing custom chips. 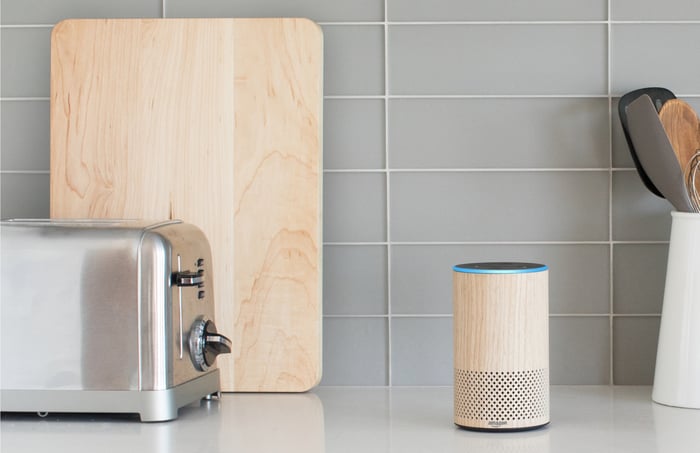 Echo devices are about to get a whole lot smarter. Image source: Amazon.

Amazon already has a small army of chip engineers

The Information reports that the e-commerce giant is developing a custom chip that is specifically designed to better handle artificial intelligence (AI) tasks. By leveraging custom designs, the tech giants seek to more efficiently process AI tasks that require a lot of computational heavy lifting. Amazon now has 450 chip engineers, according to the report.

One of the primary reasons Amazon is exploring such a strategy is in order to improve local processing performance of Echo devices. Currently, Echo devices still accomplish much of their computing in the cloud, which is slower than having everything processed locally on the device. "You'll experience some latency if you're always having to bounce off the cloud," smart-home product engineer Ahmed Abdallah told Reuters last year.

Local processing is one area where Apple's new HomePod beats its rivals, as the custom A8 is able to handle many tasks without having to touch base with the cloud. That chip debuted in 2014 in the iPhone 6, and Apple is cleverly maximizing its return on research and development spending by reusing the old chip. More recently, Apple's A11 Bionic chip includes a Neural Engine dedicated to AI processing.

Speaking of R&D expenses, Amazon doesn't report R&D expenditures like other companies. These costs are included in a broader "technology and content" line item on Amazon's income statement, which jumped nearly 40% last year and now comprise over 10% of sales.

Apple is the king of efficient R&D spend, thanks in part to prioritizing product depth over product breadth.

Here's the thing: Developing custom chips is massively expensive. With the news that Amazon is embarking down this road, investors should expect "technology and content" spending to accelerate going forward. If anything, it's surprising that it took Amazon this long to recognize the benefits of having a custom chip program.

Amazon enjoyed early success with its Fire tablets, so you'd think the company at least considered the option years ago. These days, the strongest selling point of Fire tablets is their low cost (starting at a mere $40), which consequently precludes meaningful R&D investments. Perhaps Amazon was feeling gun shy after wasting a bunch of R&D spending on the disastrous Fire phone.

In contrast, Amazon is the dominant player in the growing smart speaker market, which easily justifies the R&D investments. Echo devices are about to get a whole lot smarter.