Cook made a passionate defense of the iPhone X and said the company is more than satisfied with sales during its first quarter.

Apple (AAPL -2.98%) faced a deluge of negative press reports about demand for its iPhone X going into its earnings last week, but Apple CEO Tim Cook was having none of it. The leader of the Cupertino, Calif.-based tech giant immediately set the record straight by claiming that the iPhone X has been the company's top-selling phone ever since it launched on Nov. 3 last year.

Apple seems to have a paradox on its hands. While the iPhone X may have sold well, iPhone shipments still fell year over year -- and investors noticed. 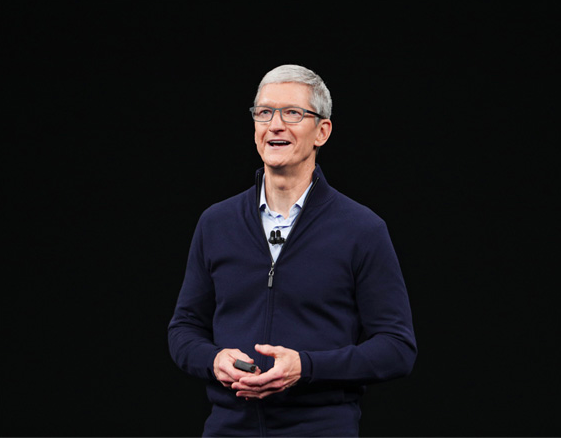 Prior to Apple's earnings, shares were hurt by a report from Nikkei Asian Review that claimed the iPhone X wasn't selling. According to the article, Apple was cutting its iPhone X production in half for the first three months of 2018 to around 20 million units due to a lack of demand.

People had a field day with that bit of news, ridiculing Apple for being too out of touch and too obsessed with itself to realize people couldn't and wouldn't shell out a minimum of $999 for the most basic version of the iPhone X. As history has shown, people love when a big tech giant gets put in its place.

Investors seemed to wait with bated breath for Apple's earnings to learn whether the company had sold an embarrassingly low number of its 10th-anniversary edition of the iPhone.

Cook didn't keep investors waiting during the earnings call. He threw his full support behind the iPhone X without hesitation. "We're thrilled with the reception of iPhone X," he said. "And as we said when we launched it, we were setting up the next decade."

He told the sometimes-skeptical analysts gathered that the iPhone X was the best-selling smartphone in the world for the December quarter, according to data from Singapore-based research firm Canalys. He also said the iPhone X has outsold the less expensive iPhone 8 and iPhone 8 Plus every week that it's been available up through January.

These claims are more impressive when you remember that the iPhone X had a late release date on November 3, more than a month after the iPhone 8 and iPhone 8 Plus came out on September 22.

Cook lauded the iPhone X team for a successful launch of a complex product that required years of research. "Our team has put the technology of tomorrow in our customers' hands today, set a standard for the next decade of smartphones, and we are very proud of their achievements," he said.

Hearing that the iPhone X has sold well should help investors breathe a sigh of relief. There was fear that the phone might cause people to look, but not buy. In fact, a lot of people did at at least look, considering that store traffic during the four weeks after the iPhone X launch was up 46% over last year, according to Apple CFO Luca Maestri.

Silence on the drop in iPhone shipments

On the earnings call, Apple was quick to highlight its record-breaking iPhone segment's revenue to make up for the year-over-year drop in iPhone shipments. While the statements seem to contradict each other at first, they can both be true when you remember that the average sale price for an iPhone jumped to $796, up from $695 a year ago.

The company was probably hoping to diminish the backlash for the drop in iPhone shipments, which has long been lauded as one of the most important figures in Apple's financial reports, due to its heavy reliance on the smartphone for revenue.

Apple said it expects revenue next quarter between $60 billion and $62 billion, which was considerably lower than the $67.1 billion analysts were expecting. This has some investors worried that Apple expects iPhone demand to continue to slow down. However, on the call, Maestri claimed that Apple actually expects iPhone revenue to grow by double digits in the second quarter as compared to the March quarter of last year.

Should we care about unit growth as much as we do?

Cook seemed to imply on the earnings call that investors should be focused more on Apple's growing, active installed base rather than unit growth. While this might seem like a way to avoid criticism for falling iPhone shipments, he has a point.

Apple's active installed base reached 1.3 billion devices in January, representing 30% growth over the past two years. "It speaks to the strength and reliability of our products and our ecosystem, as well as the loyalty, satisfaction and engagement of our customers," Cook explained. He went on to say that, while each investor will have their own things they care about when choosing stocks, he personally thinks the three months of unit sales is a "very surface way to view Apple."

In either case, Apple has survived another quarter and investors seem mostly satisfied. Next quarter, analysts will be curious to see how well Apple's new HomePod sells after its Feb. 9 launch date.