This Dividend Aristocrat has increased dividend payments for more than 25 years. Its low payout ratio and strong projected growth suggest its dividend is very safe.

With Sherwin-Williams reporting a 26.4% increase in consolidated net sales for 2017, driven in part by the company's acquisition of Valspar, and with the company projecting increases in core net sales and incremental sales in 2018, its solid growth suggests investors have nothing to worry about when it comes to the safety of Sherwin-Williams' dividend.

In fact, investors are likely to see an additional dividend increase in 2018 spurred by a strong housing market, the opening of new stores in North America, and the continued expansion into foreign markets including Latin America.

Founded in 1866, today Sherwin-Williams has more than 4,000 stand-alone stores throughout the United States, Canada and the Caribbean. Sherwin-Williams also has its own line of branded and private label products, as well as a global finishes group that reaches customers in 120 countries.

Because of its diversified business model and extensive physical presence, Sherwin-Williams enjoys a strong competitive advantage that has driven the company to multiple years of record sales and record earnings. Its business model also requires minimal capital, with growing free cash flow a positive sign for shareholders. 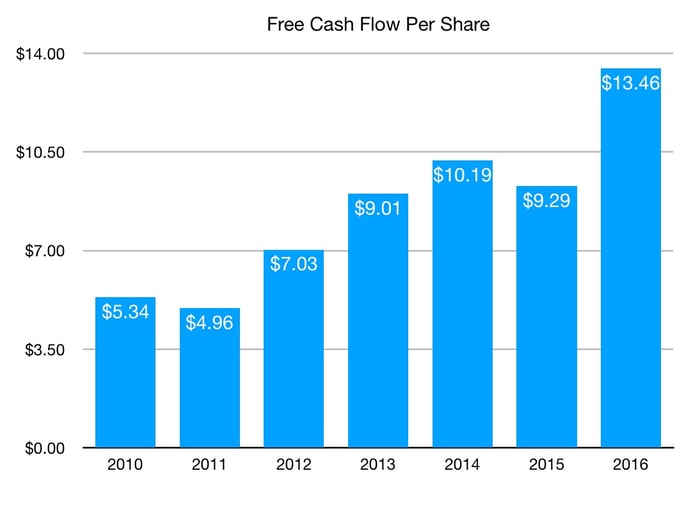 Sherwin-Williams returned more than 50% in 2017, with strong third quarter earnings driving almost one-quarter of the gains. CEO John G. Morikis said that "2017 was a year of record sales, net income, earnings per share, cash, and EBITDA."

While Sherwin-Williams stock fell in late January 2018 after the company's fourth quarter earnings missed projections, you can expect revenues and earnings per share to increase substantially in upcoming years as Valspar fully integrates into Sherwin-Williams' operations . 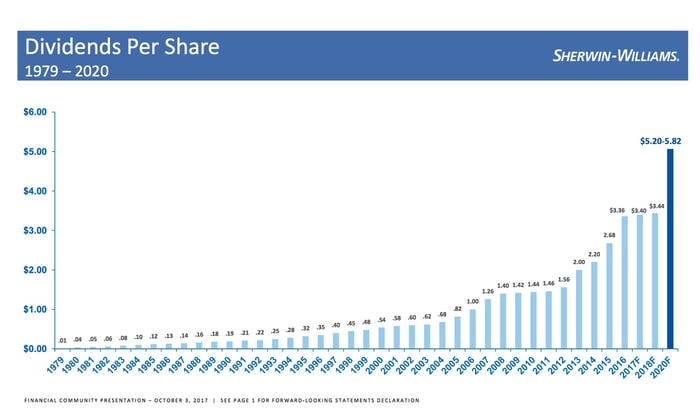 There is every reason to believe these projected increases will occur and shareholders will continue to see rising dividends. In fact, Sherwin-Williams' low payout ratio -- which is well below that of close competitor PPG -- indicates it could maintain its dividend even if earnings fell sharply. 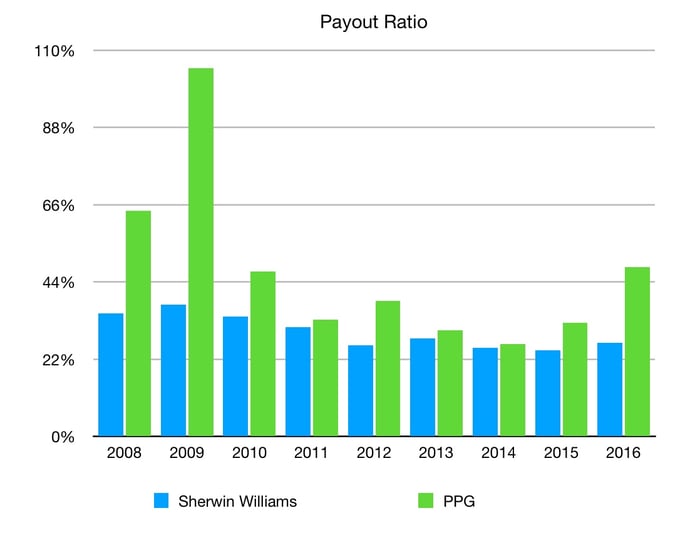 If you're looking for a Dividend Aristocrat that's projecting dividend increases, Sherwin-Williams is a safe choice. Its strong competitive advantage, decades-long track record of rising dividends, low payout ratio, and strong expected growth make it a stock worth looking at for dividend-focused investors.