Please ensure Javascript is enabled for purposes of website accessibility
Log In Help Join The Motley Fool
Free Article Join Over 1 Million Premium Members And Get More In-Depth Stock Guidance and Research
By Jamal Carnette, CFA - Feb 12, 2018 at 8:45AM

Could this high-risk toymaker be a great turnaround stock?

Last year was a year that Mattel (MAT -1.12%) investors would rather forget. Shares of the toymaker lost 44%, while the greater S&P 500 gained 19%. Mattel's third quarter was particularly disappointing: After reporting a 13% year-on-year revenue decline, 22% in the key North American market, Mattel announced it would suspend its dividend to help strengthen its balance sheet and increase financial flexibility.

Investors had low expectations for the recently reported holiday quarter. Analysts expected $1.69 billion in revenue -- 8% lower than in the prior year's period -- and adjusted earnings per share (EPS) of $0.16. Mattel underperformed by reporting $1.61 billion in revenue and an adjusted EPS loss of $0.72.

CEO Margo Georgiadis noted, "We have taken aggressive action to enter 2018 with a clean slate so that we can reset our economic model and rapidly improve profitability." Should investors jump in ahead of a potential turnaround? 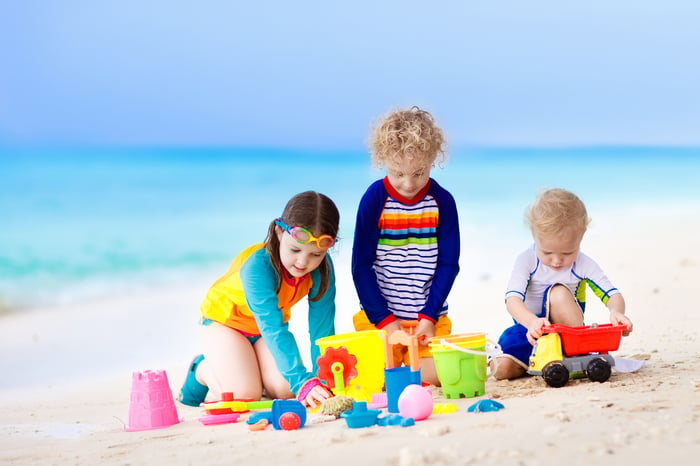 When will North America stabilize?

On a relative basis, Mattel is doing better internationally. In the fourth quarter, gross sales only were down 1% on a constant-currency basis. For the full year, the company reported revenue matching last year in constant currency. However, there's a slight negative trend beyond the head numbers: In the fourth quarter, sales to Asia Pacific, a region growing in importance, were down 14% in constant currency.

The larger North American region continued to struggle. In both the full year and fourth quarter, Mattel reported 17% decreases in sales in constant currency. Management has been dealing with the effects of the bankruptcy filing of major customer Toys R' Us, blaming the store closures and "tighter inventory management" for fewer sales.

There were a few bright spots in the company's fourth quarter. Its Mattel Girls and Boys Brand division reported a 1% gain, down 2% in constant currency. The standout performer was the company's Barbie brand of toys, which increased 6% with currency adjustments.

Barbie is a significant part of Mattel's revenue, approximately 20%. The Barbie brand has struggled over the years, as many millennial parents were concerned the brand promoted outdated gender stereotypes and unrealistic body expectations. The company's changes to address these concerns appear to be paying off.

Will Hasbro save Mattel?

Still, it's likely Mattel will lose more market share in the toy space, as key brands like American Girl are unlikely to reverse their deceleration. American Girl sales fell 21% on a year-on-year basis in 2017.

The company's plans to promote STEM (science, technology, engineering and math) through its Hot Wheels line of products is interesting, as it should increase attachment and lead to stickier consumers. Still, it's unlikely the company's brands will quickly reverse, even once the Toys R' Us bankruptcy effects fall off and make for easier comps.

With Mattel's high name-brand recognition, it's possible it would be a great stock for high-risk turnaround investors, or a buyout play. However, Mattel has no dividend, declining fundamentals, and no concrete plan to reverse its performance, so I'd wait for more certainty before committing capital.