The footwear company posted its strongest performance in years. The stock is worth a look.

In a seasonally weak quarter, Skechers (SKX -0.81%) still found a way to impress. The footwear company grew fourth-quarter revenue by 27% year over year, its fastest growth rate since early 2016. The normally sluggish U.S. wholesale business perked up, while international and retail sales growth stole the show.

Skechers swung to a loss during the fourth quarter thanks to a one-time charge related to the Tax Cuts and Jobs Act, but adjusted earnings soared right along with revenue. The stock's surge in 2017 rescued it from bargain territory, but with strong growth and a rock-solid balance sheet, Skechers is still worth a look. 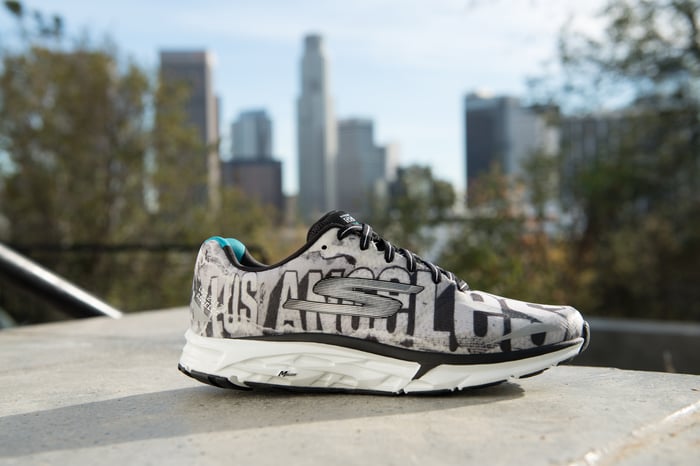 Skechers is far less dependent on the U.S. market today than it was a few years ago, but that doesn't mean it can't put up solid numbers. Domestic wholesale revenue jumped 11.6% year over year during the fourth quarter, the first quarter of double-digit growth in quite some time. This segment is now smaller than the rest of the business, accounting for 47.4% of total sales.

While sales soared, costs were kept in check, leading to a big profit boost. Gross margin rose 20 basis points year over year to 46.8%, while selling, general, and administrative expenses ate up 41.7% of revenue, down from 43.6% in the prior-year period. The net result was a near-doubling of operating income and a 425% increase in adjusted earnings per share.

"This growth is due to our continued focus on efficiencies and infrastructure as well as innovation, comfort, and relevancy within our product design. In the United States, we remained the No. 1 walking, work, casual lifestyle, and casual dress footwear brand, and the No. 2 casual athletic footwear brand," said Skechers CEO Robert Greenberg in the earnings release.

Both of these ratios ignore the excess cash of Skechers' balance sheet. The company had net cash of $656 million at the end of 2017, equivalent to about $4.19 per share. Backing this cash out, the trailing P/E ratio falls to 19.8, while the forward P/E ratio falls to just 14.

Skechers plans to use some of this cash to buy back its own shares. The company announced a $150 million share buyback program along with its fourth-quarter results (better late than never). With the buybacks set to take place over the next three years, it may not make much of a dent in the company's mountain of cash.

Given Skechers' growth rate, the valuation certainly doesn't seem too high. Skechers expects revenue growth to slow to a range of 9% to 11.4% in the first quarter, so the company's return to 20%-plus growth may be short-lived. But Skechers blew past its own guidance in the fourth quarter, and it could do so again next time around.

Skechers stock is nowhere near as cheap as it was a year ago, having surged more than 50% in 2017. But it still looks like a good deal in an expensive market.