Cryptocurrencies certainly aren't money, but they've become pure vehicles for speculation -- which is a loser's game.

There are many good reasons not to buy cryptocurrencies. My colleague Sean Williams recently highlighted a few, but the simplest reason I can think of is that I don't need to.

Why not? First, I don't fear that the government is secretly tracking my financial transactions and assets. In fact, it appears that assets held in cryptocurrencies are much more vulnerable to hacking and theft than assets held in fiat currencies like the dollar, the euro, or the pound.

Nor do I believe that the U.S. dollar is on the brink of a collapse engineered by a cabal of bankers, central bankers, and politicians.

If you are gripped by either or both of these concerns, then perhaps you can make a theoretical case for owning cryptocurrencies. But speaking of theory, let's go over some basic economics relating to the theory of money and its three functions. I'll show you how cryptocurrencies fail at all three. 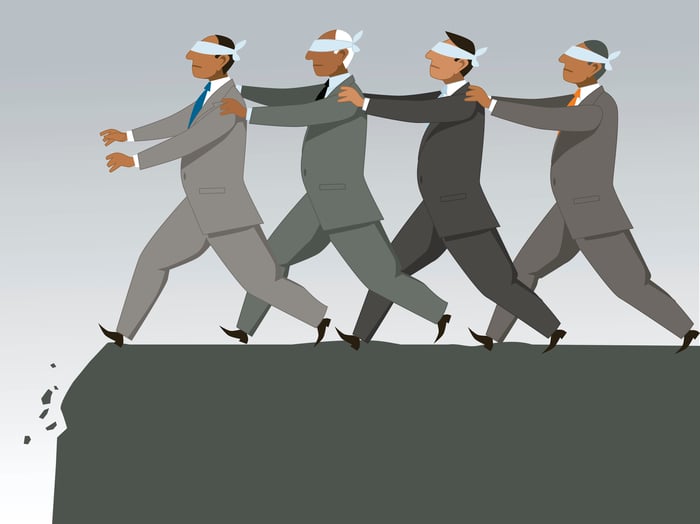 Are cryptocurrencies widely accepted as a means of payment? No. If you need proof of this, here's a simple test: When was the last time you or someone you know paid for gas or groceries with bitcoins or ether? The question isn't whether a cryptocurrency might be widely accepted by 2049; as of February 2018, no cryptocurrency is a practicable means of exchange. The only transaction for which a cryptocurrency may be better-suited than the old-fashioned dollar is the purchase of another cryptocurrency (well, that and drugs, the services of an assassin, and various other illicit goods and services).

Are prices or economic transactions -- those that are based on goods and services -- denominated in cryptocurrencies? No. Because they are not a medium of exchange, it makes no sense to express prices in terms of a cryptocurrency. The number of people who are interested in paying for things in bitcoins is much too small, relative to the entire economy, for merchants to waste their time with price tags carrying a bitcoin price.

The question of whether cryptocurrencies are a store of value is the trickiest -- and most important -- point, but a simple way to answer it is with a graph: 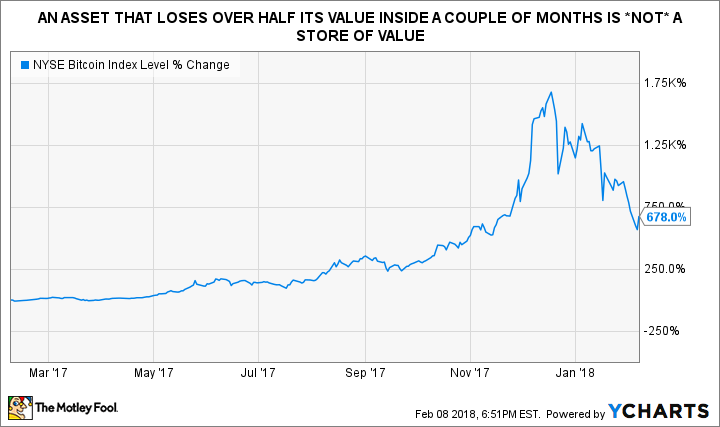 The above graph shows the 12-month performance of the NYSE Bitcoin Index, which tracks the price of a bitcoin. The dramatic volatility displayed in this graph is incompatible with the function of store of value. An asset that loses half its value in a couple of months cannot adequately perform that function.

Strike three -- it's time to head back to the dugout.

At this stage, perhaps you think I'm missing the point entirely: The main objective of buying cryptocurrencies has nothing to do with seeking an alternative currency. Indeed, the only reason any right-thinking individual buys bitcoins, ripple, ether, or any other cryptocurrency is to become fabulously wealthy (or score a huge return on one's "investment," at the very least).

To that I can only respond that speculating on cryptocurrencies is a loser's game -- even if one puts aside the significant risks of theft or fraud. Blockchain technology looks interesting, and there's good reason to think it will eventually become part of the "piping" that supports ordinary financial transactions. However, cryptocurrencies, which are but one application of blockchain, have become nothing more than vehicles for mindless speculation -- a role for which they are ideally suited, as they have no intrinsic value on which to base their prices. It's purely a game of "hot potato."

This dichotomy explains why JPMorgan Chase & Co. CEO Jamie Dimon said last September that Bitcoin is "a fraud" and "worse than tulip bulbs" (referring to the Dutch tulip bulb mania of the 17th century), all the while praising the underlying blockchain technology. His bank has multiple ongoing projects based on this technology.

If you think you're that unique individual who can gain an advantage in a game with no rational basis, then all I can do is wish you good luck. It's the only thing that will save you. (Incidentally, if you're wondering who's really getting rich in cryptocurrencies, my colleague Jordan Wathen has an answer. Hint: It isn't the people trading them.)