Please ensure Javascript is enabled for purposes of website accessibility
Log In Help Join The Motley Fool
Free Article Join Over 1 Million Premium Members And Get More In-Depth Stock Guidance and Research
By Nicholas Rossolillo - Feb 12, 2018 at 10:46AM

The storied British automaker is getting ready with new EVs that might eventually outsell Tesla in that category.

News has been circulating regarding Jaguar's first all-electric vehicle, the I-Pace, due out later this year, and rumor has it that the company will soon unveil a couple of new all-electric vehicles (EVs) for the 2019 production year. The luxury manufacturer holds a small percentage of U.S. market share, but its recent moves could propel it into a leadership position in the world's most important electric vehicle market.

For all the talk surrounding EVs, it's not really that big an industry yet. Over 17 million cars, SUVs, and light trucks were sold in the U.S. in 2017, and all-electric car sales were a minuscule fraction of that number. Hybrids and plug-in hybrids, which still require some old-fashioned fossil fuels, are excluded from the list below of the top five EV manufacturers in the U.S.

The Leaf is the best-seller of all time, as Nissan's model was early to the party back in 2011. Tesla is the real trailblazer, though, with three models now in production and over 100,000 vehicles sold globally last year. The company's work has proved the viability of the technology, and while things like charging infrastructure and battery technology still need some work, other companies are dumping money into their own versions.

Enter Jaguar Land Rover, up until a couple of years ago nonexistent in the EV conversation. Later this year, the I-Pace will make its debut. It's an SUV-style EV that, like the Tesla, was built from the ground up to be an electric vehicle. Rumor has it that hot on its heels will be a version of the XJ, the company's flagship sedan, with an all-electric powertrain. This comes in the year that marks the XJ's 50th anniversary, and Jaguar Land Rover could be looking to make a big splash with its release. It's also possible that a new car-like Range Rover will be getting an EV option later this year, too. 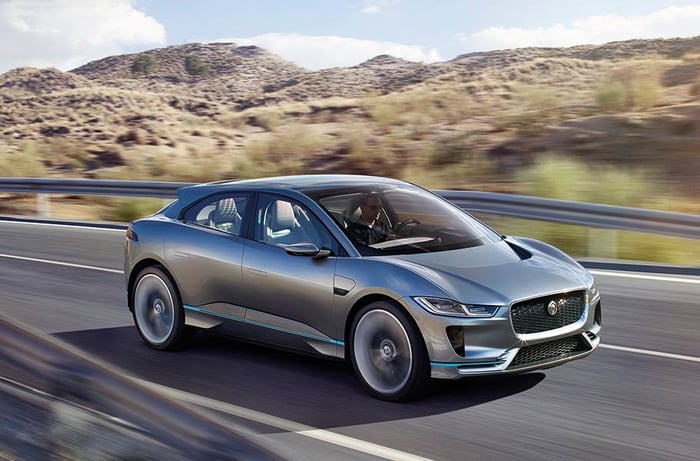 Why is that significant? Details are still forthcoming, but those three Jaguar Land Rover models should end up in the $50,000 to $100,000 range in starting price, making them legitimate Tesla contenders. The company has also said it is committed to offering an EV or hybrid version of every model it produces by the year 2020. That means the automaker could quickly go from EV irrelevancy to possibly the best-selling EV maker out there.

My assumption is based on the sales figures for the three models in question. Here's the breakdown of sales for the F-Pace (Jaguar's first SUV and closest comparable to the I-Pace), XJ, and Range Rover Evoque (the compact SUV version) for its year-to-date fiscal year ending in March 2018.

I'll go out on a limb and say I-Pace, as well as the EV replacement for the XJ and Evoque EV option, won't sell as well as their fossil-fuel counterparts at first. However, they don't have to in order for Jaguar Land Rover to be a serious contender for the annual best-seller title. The company has reported over 440,000 total units sold for its current fiscal year, and it sold over 600,000 last year. The three models getting an EV similar or replacement now make up over a quarter of the company's total sales, and the completely reimagined XJ could get new life upon its release.

And, unlike current titleholder Tesla, Jaguar Land Rover is profitable. It also has the backing of its parent company, automaker Tata Motors (TTM 2.32%), also profitable and a leader in the burgeoning Indian auto market and greater Asia exports market. That gives the company a possible advantage in future funding of research and development of EV technology and new production models.

In short, this could be the beginning of a new leader emerging in the world of vehicle electrification.