The House of Mouse is still a solid long-term investment.

Disney (DIS 3.69%) recently posted a mixed first quarter, and the stock retreated to a three-month low as the broader markets declined. The House of Mouse's revenue rose 4% annually to $15.35 billion, missing estimates by $100 million. However, its earnings grew 22% to $1.89 per share, beating expectations by $0.28.

There were certainly a few weak spots in the report. Revenue from Disney's closely watched Media Networks unit stayed flat year-over-year as its operating income fell 12% on cord cutting challenges. The Studio Entertainment unit's revenue and operating income respectively dipped 1% and 2% as its softness in home entertainment, TV, and streaming video offset its theatrical gains.

The smaller Consumer Products and Interactive Media unit posted a 2% drop in sales and a 4% decline in operating income as robust sales of games failed to offset its declines in merchandise licensing and retail.

Those numbers were admittedly disappointing, but Disney's other strengths -- which I'll highlight in this article -- enabled it to post positive revenue and earnings growth for the quarter. I've owned Disney for several years, and I plan to keep holding it for three simple reasons.

1. The growth of its Parks and Resorts business

The bears often claim that the weakness of Disney's Media Networks (30% of its operating income during the quarter) will gradually weigh down its earnings. Yet they often gloss over the fact that Disney keeps offsetting those declines with the growth of its Parks and Resorts business.

Disney attributed the unit's operating income growth to higher guest attendance and spending at its parks and resorts, longer cruises on its cruise ships, and higher attendance at Disneyland Paris. This business should keep growing as Disney adds three new cruise ships to its fleet, builds new Toy Story Lands in Shanghai and Orlando, and opens Star Wars: Galaxy's Edge in Disneyland and Disney World.

Disney also revealed that its upcoming ESPN streaming app will cost $4.99 per month. The app will feature personalized scores, highlights, and news stories; live streaming from the major ESPN networks; and access to ESPN Plus, which features exclusive content for subscribers.

The bears often claim that a $4.99 per month service can't offset Disney's loss of ESPN cable subscribers, which generate over $9 per month in carriage fees. However, Disney is aiming the app at the cord cutters, who would otherwise completely abandon ESPN and its other cable networks. 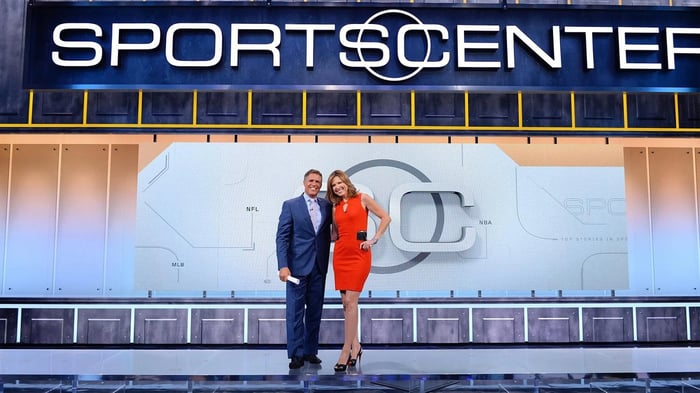 Replacing $9 in carriage fees with $5 in streaming revenues might seem like a loss, but it's better than generating no revenues at all. By pushing cord cutters toward its ESPN app, Disney can slow the declines in its cable business and allow other growing businesses -- like Parks and Resorts -- to catch up.

But that's not all. Disney still plans to launch a second streaming platform for its massive portfolio of content, including its first-party content from Pixar, Marvel, and Star Wars. Even Netflix (NFLX 5.03%) CEO Reed Hastings recently stated that he would personally subscribe to the service.

Disney CEO Bob Iger stated that the platform would have less overall content than Netflix, but that it would offer plenty of appealing content. If Disney also prices this platform at about $5 per month, subscribing to two Disney platforms for $10 per month could be an appealing alternative to Netflix's most popular two-screen plan, which costs $11.

3. The Fox merger and Hulu

It would own popular cartoons like Family Guy and The Simpsons, the critically acclaimed shows of FX, indie movies from Fox Searchlight, and Fox's X-Men movies and shows -- which could be reunited with Disney's own Marvel universe. Integrating that content into its streaming platform could pull a lot of viewers away from Netflix.

Disney would also own 60% of Hulu after acquiring Fox's 30% stake in the company. Hulu still ranks a distant third behind Netflix and Amazon in the streaming market and is deeply unprofitable (losing $920 million on an investment of $1 billion last year), but it still represents a third way for Disney to counter Netflix.

Investors should note that the Fox merger isn't a done deal yet, and could be blocked by regulators or a rival bid from Comcast, which owns a 30% stake in Hulu. But if the deal closes, Disney's clout on both the cable and streaming fronts would be tough to match.

Disney's stock isn't a rocketship, but it also isn't expensive at 15 times its 2018 earnings estimates. It pays a decent forward yield of 1.5%, which is just slightly lower than the S&P 500's yield of 1.9%. Therefore, I still believe Disney is a solid long-term investment, and I won't sell my shares anytime soon.