Sometimes the devil is in the details.

Kadmon (KDMN) closed down more than 21% today after announcing phase 2 data for its drug candidate KD025 in patients with a lung disease called idiopathic pulmonary fibrosis (IPF). While the company called the data "positive," investors saw that it offered more questions than answers.

First, the good news: The forced vital capacity (FVC), a measure of lung function, decreased by a median of 48 mL after 24 weeks of treatment with KD025, compared to a median of 175 mL for patients given best supportive care. Looking at the drug-treated patients another way, they went from a decrease of 126 mL in the year before being treated to an annualized rate of 32 mL after being treated.

All that looks good, but FVC is usually presented as a percent predicted number because height, age, sex, and race can affect FVC values. When calculating the FVC on a percent predicted basis, the difference wasn't as impressive with patients taking KD025 having a median decline of 1% while the control group dropped 2%.

The decline in FVC percent predicted is half as much for patients treated with KD025, but the values aren't numerically all that different, which is worrisome given the small number of evaluable patients -- 20 for the treated arm and nine for the control arm.

Adding to the worry about the patient numbers, seven patients treated with KD025 dropped out due to adverse events. Only one was deemed due to treatment, but the high dropout rate is concerning, especially since the Food and Drug Administration will likely require data from patients who drop out to be included in the overall results. 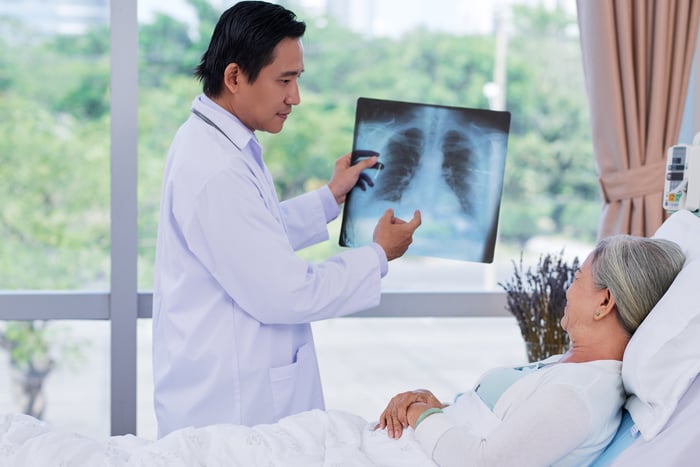 Kadmon is looking to run a larger trial with 150 patients as well as another phase 2 trial testing KD025 in combination with other drugs used to treat IPF. While it's hard to draw any firm conclusions over whether those trials will be successful based on these phase 2 data, it looks like KD025 has enough activity to justify developing it further.

Shares of Kadmon ran up going into the data release, so even after the massive slide, today's closing price is actually slightly higher than where it started the year, which seems about right given the data.