Shares of the Roomba maker plummeted 34% last week after the company announced earnings, so CEO Colin Angle's comments during the earnings call are even more important than usual.

Revenue and adjusted earnings easily swept by Wall Street's expectations. iRobot's 2018 revenue growth outlook of 19% to 21% was somewhat better than analysts were expecting, though it does represent a slowing from last year's 34% growth, which was boosted by the company's acquisitions of two distributors. However, its 2018 earnings projection of $2.10 to $2.35 per share, which translates to year-over-year growth of 19% to 33%, came in notably below the Street's forecast of $2.70.

The market pummeled the stock, sending shares to a closing loss of 32% on Thursday. The weaker-than-expected earnings outlook undoubtedly reignited concerns about the intensifying competition in the robotic-vacuum market. The stock has since gained back a little of its lost ground, with shares down 27.6% since earnings were released, as of Tuesday. The stock is up 19% for the one-year period, edging out the S&P 500's 17.3% return.

Given the weaker-than-anticipated earnings guidance for 2018, management's comments during the earnings call are more important than usual. Here's what you should know. (Transcript via Seeking Alpha.) 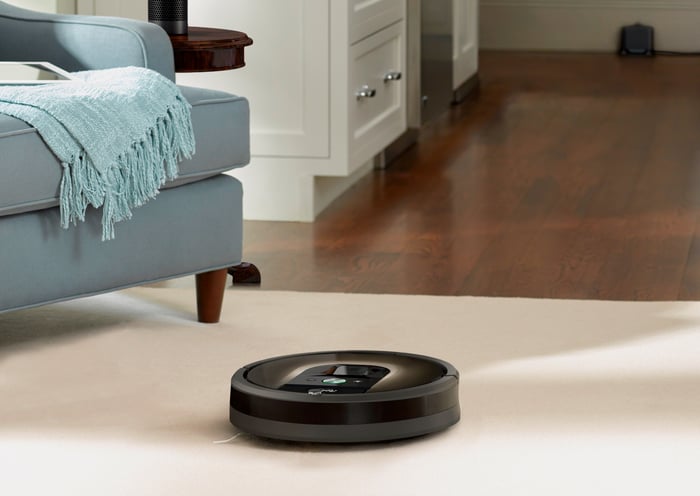 1. Forgoing some near-term earnings growth to set itself up as a long-term winner

I want to reiterate that iRobot is committed to its profitable growth strategy... But, at this moment in time, with the market accelerating in its growth and competitive pressure coming into the market, we made a choice to double down on ensuring we had adequate dry powder to drive that top-line growth. ... [S]ome of our analysts [and] investors may have been looking for more bottom-line growth [in the 2018 outlook]. This is a moment in time where over the next three years, the true winners in the consumer robot industry are going to be determined for the next decade.

iRobot's 2018 earnings outlook isn't as robust as Wall Street anticipated because the company plans to accelerate spending on activities -- such as marketing and research and development -- aimed at driving revenue growth and capturing as much market share as possible at this critical time when adoption of robotic vacuums is accelerating and competition is heating up. (SharkNinja is the main new competitor to watch. In September, the U.S.-based appliance maker launched a product priced at $350, which is near the lower end of iRobot's price range for its Roomba line.) This move is necessary, in my opinion. It will be easier for the company, which is the category leader, to capture new adopters of robotic vacuums than it will be for it to try to win over consumers after they've already bought a competitor's robotic vac.

Global household penetration of robotic vacuum cleaners is still extremely low, in the single digits. In the U.S., where penetration is the highest, it is still at roughly 11%. That landscape provides us with a tremendous opportunity for sustained growth.

Increased competition should never be taken lightly. That said, investors should keep in mind that penetration rates in the robotic-vacuum market are low and the global market is expanding rapidly. (In 2017, the market grew more than 25%, Angle said on the call.) So iRobot has the potential to continue to grow nicely, even if a new competitor or two takes some market share.

From Angle's remarks regarding the company's line of floor-mopping robots:

In 2017, Braava family revenue grew 26%, [comprising] roughly 9% of total Company revenue. We continue to see a growth opportunity for the wet floor care market as we improve [Braava's] positioning and better articulate its value proposition. In Q4 2017, we launched our first ever Braava national television program in the U.S. following a very positive reaction to our limited television roll-out in 2016, and Braava family revenue grew 65% in 2017 over full-year 2016.

While the Braava line comprised only about 9% of the company's total revenue in 2017, it appears that this percentage has a good shot at growing. This would be a great thing, as iRobot's main vulnerability is that it has too many eggs in one basket, in my view. As Angle noted, the company is in the very early stages of advertising the Braava line on TV in the U.S. As was the case with the Roomba, iRobot's international advertising campaign will follow its U.S. one.

[W]e plan to launch several new products in the second half of 2018. As with all our new products, I will not provide any additional details about the products or timing of their [respective launched] other than to say that we expect 2018 revenue contribution [from new products] of roughly 20% to 25% and further strengthening of our RVC [robotic-vacuum category] leadership.

This one speaks for itself.

In short, while iRobot had a great quarter and year, it's in for some increased competition in its core U.S. market this year. The company's status as the category leader that makes top products and its solid balance sheet mean that it's in good shape to wage battle, though investors need to remain laser-focused on competitive pressures.