Please ensure Javascript is enabled for purposes of website accessibility
Log In Help Join The Motley Fool
Free Article Join Over 1 Million Premium Members And Get More In-Depth Stock Guidance and Research
By Jamal Carnette, CFA - Feb 14, 2018 at 9:45AM

After years of falling behind peers, Walmart (WMT -0.25%) is suddenly cool again. Last year, analysts noted the company's brand reputation has improved, most notably with the key millennial demographic. Walmart's online efforts are a large reason for its success. Since paying $3.3 billion for millennial-friendly website Jet.com, acquiring that site's CEO Marc Lore in the process, Walmart has continued to rapidly grow sales from its digital channel. 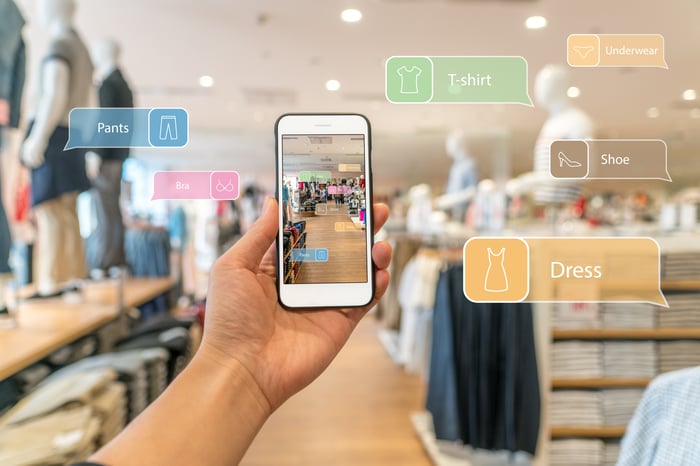 Store No. 8 has been active

Who said corporate incubators are for technology companies only? Under new digital head Marc Lore, Walmart has joined the ranks of companies like Alphabet and IBM by creating an incubator with an eye on next-gen retail ideas. Walmart's incubator, Store No. 8, derives its name from an early store that founder Sam Walton used to attempt experimental ideas.

Since Lore's announcement last year, Store No. 8 has been busy; the incubator now has three portfolio companies. Code Eight, a company dedicated to "highly personalized one-to-one shopping experiences," is led by Jennifer Fleiss, a co-founder of Rent the Runway. The second company, Project Franklin, is led by the former CEO of Keurig-like company Wim Yogurt.

Store No. 8 recently announced the acquisition of its third portfolio company, Spatialand, which has created a "proof of concept VR [virtual reality] experience for how we envision millions may shop in the future."

When investors normally think of VR (or augmented reality, "AR"), it's in the gaming or entertainment space. For the former, it's most likely Facebook's Oculus product. And that's where Spatialand's founders developed their skills, with founder Kim Cooper working on films like Iron Man and Rogue One: A Star Wars Story, and on projects with Oculus.

Increasingly, virtual reality is being incorporated in retail operations. Many consumers are familiar with the crudest form of VR/AR, virtual space planning, as it's been used for years by consumer furnishing companies like Ikea. Increasingly, high-end brands like Swarovski, Neiman Marcus, and Sephora are going mobile, testing virtual and augmented reality apps. Store No. 8 appears to be embrace the opportunity, noting in its press release:

At our core, we are merchandisers and storytellers which drives us to believe that virtual reality has the potential to reinvent the consumer experience—with an experience we call contextual commerce.

While it's likely that VR and AR will be utilized in the company's e-commerce channel, don't overlook their potential in the company's physical stores. Although VR and AR in brick-and-mortar stores may seem like a scene from the movie Minority Report, advertisers have been working on personalized digital billboards for years.

Admittedly, VR and AR have not quite caught on with shoppers yet. However, Walmart commands enough market share and attention in retail to force others to follow, if the company can successfully bring a successful VR/AR experience to market. More broadly, Store No. 8 and the Spatialand acquisition show that Walmart is looking to build upon its brand reputation and improve the shopping experience.