Gaming has turned into a service, and that can only help the company's future revenue generation.

The year 2017 was an important one for Activision Blizzard (ATVI -0.44%). The company behind Overwatch was able to grow revenue and earnings despite few new game releases. However, throughout the year, Activision kept up a steady release of game updates, additional features, and events across many titles that kept player engagement at high levels. This built engagement to the point where Activision finished the year with back-to-back quarters in which daily time spent per user reached more than 50 minutes across all games, which is consistent with the most popular social media outlets.

It's not about new game sales anymore

Activision is entering a stage in its growth where it's less dependent on new game releases as in years past. In fact, management expects spending for game expansions and cosmetic items, like in-game character outfits and profile icons, to be the primary driver of revenue and earnings growth going forward. 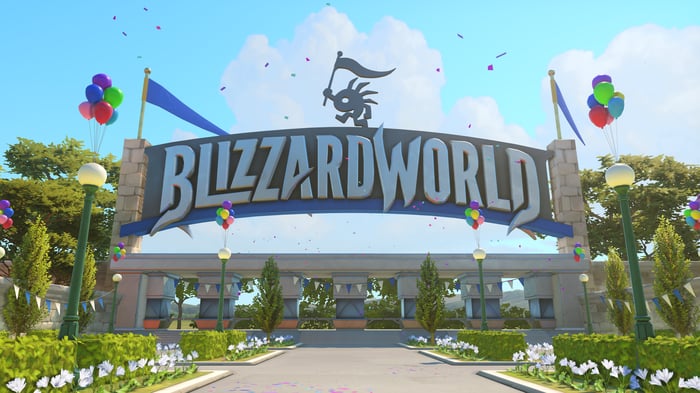 In 2017, Activision generated more than $4 billion of its $7.2 billion in total revenue from in-game spending. The company focuses on designing games to be so fun and addictive that players will spend additional money for extra content. It's been working, and it's giving Activision a more predictable stream of year-round revenue.

In-game spending also costs very little compared to making the game, which helps margins and cash flow generation, as you can see in the table below.

The trend decreases Activision's business risk to investors by helping the company overcome the occasional weak reception of a new game. Activision's financial results for Q4 2016 are a perfect example. During that period, strong performance for the company's in-game content and services across its diverse game library took the spotlight off a poor launch for Call of Duty: Infinite Warfare.

That set the tone for the whole year. Throughout 2017, Activision was able to keep engagement and in-game spending up within the Call of Duty franchise because of new content it released for the older Call of Duty: Black Ops III release. This approach for Call of Duty is a microcosm of what's happening across the company's franchises. Management believes it's still in the early innings of growth with this strategy.

Here are a few highlights of what management has planned for 2018 to continue increasing player engagement and in-game spending.

The biggest new content release will be a major expansion for World of Warcraft in the summer. This is a popular but aging franchise, having been around 13 years. But there's still a passionate player base of several million people. A major update has been released every few years, which has kept players coming back. The last major expansion, World of Warcraft: Legion, was released in Q3 2016 -- it sold 3.3 million copies in one day and increased monthly active users by 30%.

Also, the company will begin using its new esports event -- Overwatch League -- to create higher engagement and spending within the Overwatch franchise, which has a player base of more than 35 million. Blizzard is blending the viewing experience of Overwatch League with the game itself by incorporating menus within the game to provide players easy access to watch League matches. And players can watch matches through the official Overwatch League website and the popular game-streaming site Twitch.

Management is using Overwatch League to create excitement around the franchise, so players are encouraged to spend more time in the game and buy additional cosmetic items via micro transactions.

Here's how Michael Morhaime, president and CEO of Blizzard Entertainment, explained the impact Overwatch League is having on the game:

The Overwatch League has driven a ton of buzz and awareness for the game. And so as that increases, our players have new ways to customize their playing experience with in-game digital skins as well as physical merchandise, and we've seen our players respond well to both of those.

Of course, these aren't the only games benefiting the company. Activision has several major franchises -- including Hearthstone, Candy Crush, and Destiny -- that will continue to drive in-game revenue as well.

The old strategy of depending completely on new game sales was unpredictable and lumpy. The new digital environment where games become more of a service with additional content releases is stretching the life cycle of each game out to multiple years instead of months or weeks.

On top of that, game streaming and social media are helping the video game industry to grow and reach new audiences. Game companies are starting to capitalize on that growth by pursuing opportunities in consumer products, movies, and professional esport leagues to become a mainstream entertainment provider for millennials.

These trends are all coming together and ultimately are helping game companies grow revenue, earnings, and cash flow more predictably year-round. And that's why Activision has become a safer stock for investors.