The company is proving the freemium software model works.

Cloud-based sales and marketing platform specialist HubSpot (HUBS 4.63%) saw its total sales, subscription revenue, and new customer acquisitions all spike in the fourth quarter. The company also finished out 2017 with a vast improvement in non-GAAP income. Here are some of the highlights from the recent quarter. 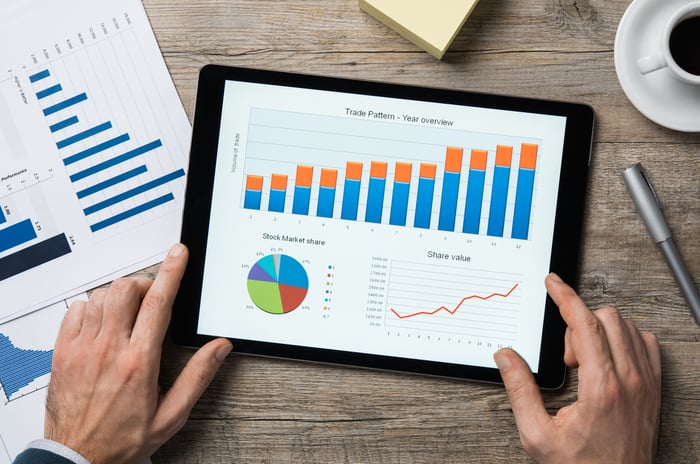 HubSpot's fourth-quarter and full-year performance put it on a stronger financial footing.

The fourth quarter closed out a great year of performance, where HubSpot's full year revenue grew 39%, total sales and marketing customers surpassed 41,000 and non-GAAP operating margins grew to a positive 2%. Very, very happy with HubSpot's performance over the last year.

Halligan spoke about the company's commitment to a freemium model -- where customers use a free version for a while and then later upgrade to a more complete, paid version -- and how it helped the company grow in 2017. He said HubSpot has added lots of free users and has figured out how to turn many of them into paying customers:

We added loads of free users to the platform, and we increased the amount of revenue that's originating from our free products as well. It took a bit of time to figure it out, but our sales team has made a lot of progress on this front, and momentum is really starting to gain steam. In 2018, we're going to keep our foot on the accelerator with R&D investments we're making into the freemium product.

HubSpot's management expects sales to be in the range of $109.2 million to $110.2 million in the first quarter, and non-GAAP operating income to be $4.5 million at the midpoint. Executives believe non-GAAP net income will continue to climb sequentially to $0.11 per share at the midpoint of guidance.

Halligan is confident the company will continue to build on its growth from 2017 as it moves further into this year.

He said on the call: "Ultimately, when we look out beyond 2018, we continue to see a ton of opportunity, some of which we'll be able to share with you at our INBOUND event in September. But suffice it to say, we don't feel like we're anywhere close to being done with where we can go with our products, the company, this vision and the value we can deliver for our customers worldwide."