Cisco grew revenue, bumped up its dividend, and added $25 billion to its share-buyback program.

Networking-hardware provider Cisco Systems (CSCO 2.73%) reported its fiscal second-quarter results after the market closed on Feb. 14. The company produced revenue growth for the first time in two years, and it guided for even quicker growth during its third quarter. Along with reporting its results, Cisco announced a double-digit dividend increase and a massive new share-buyback authorization, fueled by the repatriation of $67 billion of cash. Here's what investors need to know about Cisco's second-quarter report. 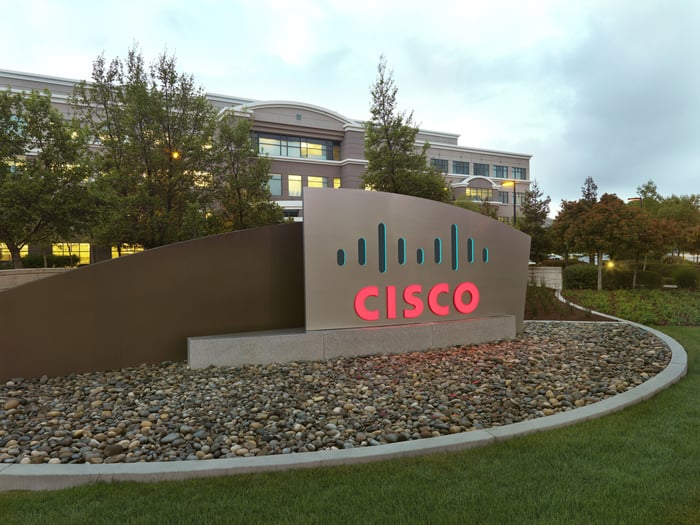 What happened with Cisco Systems this quarter?

Cisco returned to revenue growth after a two-year hiatus:

Cisco boosted its dividend and vastly increased the size of its share-buyback program:

Cisco provided the following guidance for the fiscal third quarter:

During the earnings call, Cisco CEO Chuck Robbins discussed the success of the Catalyst 9000 switching platform: "We saw strong adoption of our subscription-based Catalyst 9000 switching platform, as we more than doubled our customer base from last quarter to over 3,100 customers. This is the fastest ramping new product introduction we've had in our history, and a fantastic example of the innovation we've delivered over the past two years."

Cisco's shift toward subscription revenue is part of the reason why its revenue has been declining for the past two years. Revenue that would have otherwise been recognized up front was being pushed into the future, creating a revenue headwind that the company has just now overcome. Cisco expects even stronger revenue growth in its third quarter.

Cisco's $25 billion share-repurchase authorization is enough to buy back about 12% of all outstanding shares. That will provide a nice boost to per-share earnings over the next couple of years, which will allow the company to continue raising the dividend faster than the rate of earnings growth.