Please ensure Javascript is enabled for purposes of website accessibility
Log In Help Join The Motley Fool
Free Article Join Over 1 Million Premium Members And Get More In-Depth Stock Guidance and Research
By Adam Levy - Feb 15, 2018 at 10:00AM

But its active user count leaves a lot of room for improvement.

Twitter (TWTR -1.02%) often gets compared to Facebook (META -5.20%), especially in the small circle of investment analysis. Many analysts believe it's unfair to compare Twitter's active user count to Facebook's due to the target audience for the company's respective products. Twitter has even said it's unfair to compare its user counts, but says that's largely due to the way Facebook counts active users.

Facebook's flagship platform appeals to everyone, as we all innately want to connect with friends. Twitter is seen to have more limited appeal, targeting those interested in news and live events.

But CEO Jack Dorsey thinks Twitter could have much broader appeal. "We are serving a job that is valuable to every single person on the planet," he told the audience at a recent investors' conference.

Through that lens, Twitter's 330 million monthly active users is extremely disappointing compared to Facebook's 2.1 billion. And its growth, just 4% year over year, is even more disappointing considering Facebook grew its users 14%. 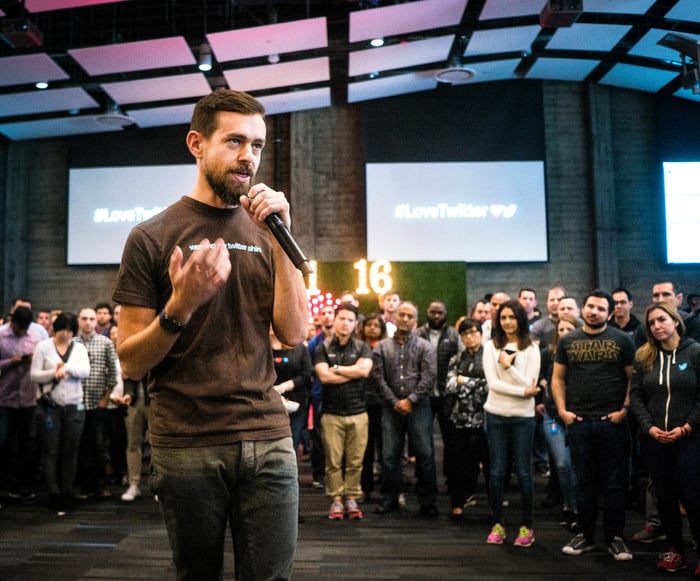 Dorsey says the first step to accelerating its user growth is to engage its existing users more: "The strongest growth lever is going to be by engaging those customers to first strengthen the density of the network, and then to tell their networks about why this thing's valuable. That message to friends, to a colleague, to a family member is so much more powerful and practical than any marketing message that we could ever give."

To that end, Twitter has seen daily user growth outpace monthly user growth in each of the last eight quarters. That's a strong indication that its users are becoming more engaged.

Making the product easier to use

That's an issue that Dorsey fully recognizes, and the company is making changes to make it easier for new users to get started on the platform. Unlike Facebook, it's not exactly clear who you should connect with on Twitter.

"One of the things we've been trying to do for the past few years is to get out of this bucket of being a social network," Dorsey said. That's because when you come to Twitter, it's not (necessarily) for connecting with your relatives, friends, or classmates. It's for finding new and interesting information and conversation about the topics you care about. But it's not explicitly clear how you find those conversations, especially as a new user.

That's a tough challenge to overcome -- one Facebook doesn't have to deal with. It's not clear if Twitter can make the product easier to use for new users. Even if it can, it's unclear if it can win back the hundreds of millions of users who have already tried Twitter and decided it's not for them, which is a whole other challenge.

Facebook's user count shows the potential for Twitter's audience. Twitter currently sits at less than one-sixth of Facebook's total users. It's done slightly better in the U.S., with 68 million users compared to about 230 million for Facebook. But even there Twitter's growth is lagging behind Facebook's.

While Twitter theoretically has a broad appeal, as Dorsey points out, it's hard to see it reaching beyond a core user base of news junkies and sports fans. It will take a big investment in engineering to get the product to the point where it can make it easier for new users to find the conversations they're interested in. But Twitter has significantly cut back on research and development recently.

Investors should note Twitter still has room to improve its user monetization -- which also trails Facebook's by a significant margin. And the first step to getting there is improving its user engagement and understanding their interests better -- which is exactly what it's doing. If those efforts pay off in monthly user growth, investors should consider it a bonus.