"Competition [is] nowhere in sight."

SolarEdge (SEDG -1.78%) makes solar power inverters -- the little electronic widgets that take the electricity absorbed by solar panels, and convert it into the kind of electricity that can power your PC. It sounds like a pretty straightforward process -- but as it turns out, it's also a very profitable process for SolarEdge.

Last night, SolarEdge reported its fiscal Q4 and full-year 2017 earnings results, and it easily surpassed analysts' expectations. In response, SolarEdge stock won a big upgrade from analysts at Vertical Group this morning -- and a whole series of price target hikes from analysts up and down Wall Street. 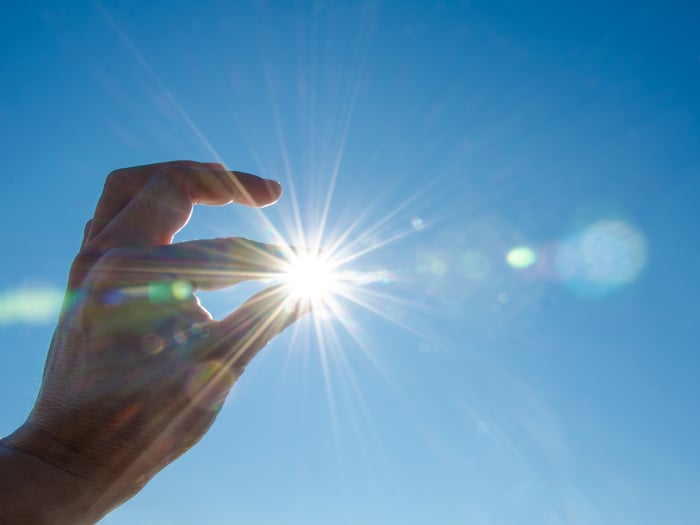 SolarEdge has the solar market at its fingertips -- and Wall Street is tapping the "buy" button. Image source: Getty Images.

SolarEdge reported last night that it earned $0.42 per diluted share ($0.85 adjusted for one-time items) on sales of $189.3 million. The numbers trumped analyst expectations, which had forecast adjusted profits of only $0.63 per share on sales of $179.8 million. Sales grew 70% year over year, and net income jumped 91% despite hefty charges taken to net income, related to tax reform.

And in evidence of its margin's staying power, SolarEdge forecast that in Q1 2018 it will maintain a level of gross profitability in the 36% to 38% range on sales of $200 million-$210 million -- 78% higher at the midpoint than it booked in Q1 last year, and at a better margin.

It wasn't long before the applause could be heard on Wall Street. At last count, StreetInsider.com is reporting that no fewer than eight analysts have lifted their price targets for SolarEdge stock, and Vertical Group went even farther -- upgrading the stock to buy. According to Vertical, SolarEdge's competition is "nowhere in sight," and with no need to fight price wars, SolarEdge can essentially "dictate" prices for solar inverters "through 2018."

As for the other analysts, here's a quick survey of what some of them have been saying, with comments drawn from reports at both StreetInsider and TheFly.com:

SolarEdge stock has surged to nearly $45 in response to yesterday's earnings (and today's upgrades). Despite this run-up, the latest batch of price targets imply that analysts, at least, believe there are still more gains to be had. Are they right?

At a market capitalization of $1.9 billion after its run-up, with $240 million in the bank, a further $103 million in long-term investments -- and no debt to speak of -- I get an enterprise value of roughly $1.6 billion for SolarEdge stock.

With $115 million in trailing free cash flow, the stock is therefore selling for less than 14 times its cash profits. Given Wall Street estimates (provided by S&P Global Market Intelligence) for 22% annualized long-term earnings growth, I think SolarEdge stock is still selling for a bargain price even after its run-up -- and Wall Street is right to upgrade it.