New York Community Bancorp has been on the outs since a planned acquisition was cancelled.

2017 was a good year for banks, generally speaking. But not every financial institution got love from the stock market. Fresh off the cancellation of a planned acquisition, New York Community Bancorp's (NYCB -0.22%) share price fell by almost 20% across 2017.

The company recently unveiled its results for that fiscal year, plus its fourth quarter. Can its performance bring the bulls back to its shares? 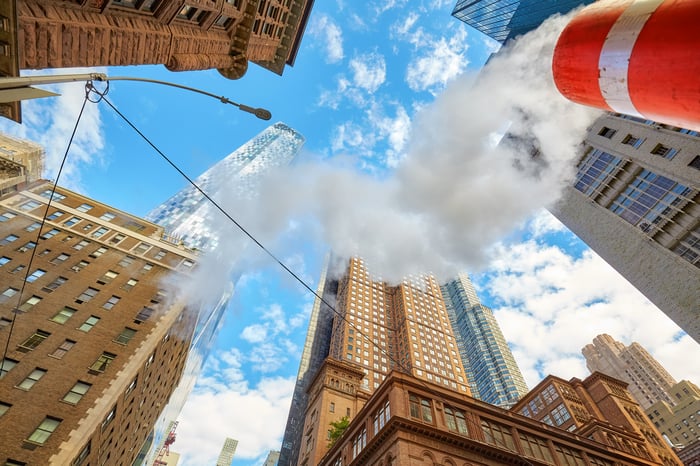 For the quarter, New York Community Bancorp's total revenue came in at $296.3 million, which was a 15% drop from the Q4 2016 result. On the bottom line, net profit rose by 20% to $136.5 million ($0.26 per share). However, $42 million of this was due to a net tax benefit booked in advance of the upcoming changes to the corporate tax regime. On average, analysts expected per-share net profit of $0.17 for the period.

That said, New York Community Bancorp's business is more solid than these recent declines would indicate. The company's core activity is the provision of mortgages for multi-family homes in New York City. This, it almost goes without saying, is a lucrative and high-demand segment of the real estate market.

The drops in fundamentals were due partially to divestments the company made last summer. It reached a deal to sell the mortgage banking business it acquired as part of its 2009 buyout of AmTrust Bank to Freedom Mortgage Corporation. Another set of mortgage-related assets was bought by an affiliate of big private-equity concern Cerberus Capital Management.

The erosion in fundamentals probably isn't a key reason why the stock has traded down. At the end of 2016, a planned acquisition of fellow New York lender Astoria Financial was called off by the two companies. Since then, New York Community Bancorp's stock price has fallen by 21%. Meanwhile, Astoria has been taken off the market; last year it was acquired by Sterling Bancorp (STL).

Investors weren't crazy about the acquisition (we might say the same for Sterling's, as that company's share price has flatlined since its deal). In New York City Bancorp's case, this was most likely because the purchase would have vaulted the company into the government's "systemically important financial institution" (SIFI) category for banks that hold over $50 billion in assets. Becoming a SIFI means a raft of new reporting and regulatory requirements, which naturally ramp up a bank's costs of compliance. And the bank is already near the threshold: At the end of 2017, its assets stood at $49.1 billion.

Acquisitions helped the bank grow to its present size, and the Astoria Financial play clearly indicates it's willing to continue along this path. Becoming a SIFI will be quite the game-changer, though the market seems wary of "graduation" to this status.

Go ahead and grow

The concern with asset size and "systemic importance" might soon become moot, however. A bill making its way through Congress proposes to raise the SIFI threshold from the present $50 billion to $250 billion. If this passes into law, New York Community Bancorp would be well under the bar, even if it swallowed an Astoria Financial-sized acquisition.

The company's stock could see a nice pop in that case. Meanwhile, its core business is solid, and it throws off more than enough cash to pay a generous dividend -- Despite a cut in early 2016, it currently yields over 5%.