Over the past two decades, New York Community Bancorp (NYCB 4.35%) developed something of a cult following among dividend investors and bank stock aficionados. It earned this reputation honestly, as its stock has returned more than 4,000% since its initial public offering in the mid-1990s, beating its peer group by a factor of 10. But there's reason to believe that the New York-based bank may be losing its luster.

Despite making it through the financial crisis unscathed, its stock has since lagged the industry. The total return on New York Community Bancorp's stock including dividends over the past five years is half that of the KBW Bank Index, which tracks large-cap bank stocks. Its return over the past three years equates to a mere third of the widely tracked index. And most tellingly, while the average big bank stock has soared 30% since the presidential election, New York Community Bancorp's stock has climbed only 10%. 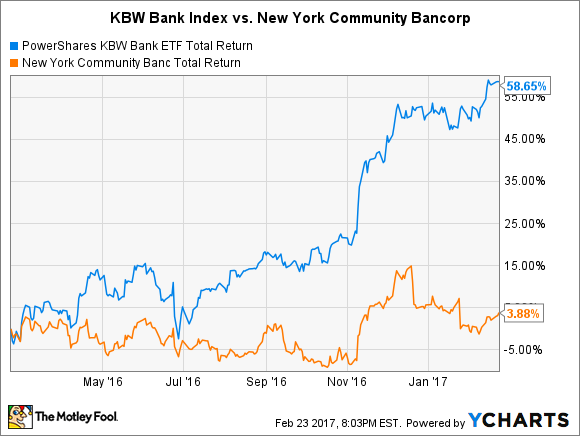 It's tempting to attribute all of this to bad luck, a temporary fall from grace caused by external factors as opposed to an internal problem at the bank. This is in fact exactly how New York Community Bancorp's executives see things. On its latest earnings call, CEO Joseph Ficalora responded to a question about its lagging stock price by saying that it was a "momentary consequence of some of the things that are happening externally... either interest rates or regulatory or other things that are happening in the marketplace."

On earnings calls before the deal, the bank's executives habitually touted how many consecutive quarters it had paid out $0.25 a share to its stockholders. When it came to cutting the dividend, however, they weren't nearly as forthcoming, burying the news in the final paragraph of a dense press release. "Based upon an anticipated dividend payout ratio of 50% upon completion of the merger, we have decided, going forward, to reallocate $0.08 cents per share from our traditional dividend payment to support our future growth and capital strength," Ficalora said in prepared remarks. "Accordingly, our expected dividend will be $0.17 per share, subject to regulatory approval, beginning in the first quarter of 2016." To be fair, the decision to cut its dividend was unavoidable. Because the merger would put New York Community Bancorp above the $50 billion threshold in terms of the assets on its balance sheet, the bank would become a systemically important financial institution. As such, it would be subject to a host of heightened regulatory standards, including the Federal Reserve's caps on dividend payouts, which kick in at between 30% to 40% of a bank's earnings. This made New York Community Bancorp's approximately 90% payout ratio unsustainable.

The net result is that the proposed merger promised to fundamentally transform the nature of an investment in New York Community Bancorp. It would be riskier, because the bank would be diversifying away from its tried-and-true model of financing rent-controlled multifamily apartment buildings in New York City, which rarely have vacancies. It would hurt New York Community Bancorp's low efficiency ratio -- noninterest expenses as a percent of net revenue -- because it would inherit Astoria Financial's large branch network. And it was a direct affront to any long-term investors who relied on the bank's purported commitment to maintaining its quarterly payout.

Given all of this, you'd be excused for thinking that New York Community Bancorp's stock should have shot up when it was recently revealed that the merger was off. But that hasn't been the case. While other bank stocks have continued to extend their all-time highs, New York Community Bancorp's stock dropped 11% after the revelation, causing it to miss out on the bump in bank stocks following the presidential election.

In my opinion, there are three reasons for this. The first is that New York Community Bancorp's management is losing credibility. It was a bad deal that shouldn't have been considered in the first place. And when it was announced, the bank's executives should have been more conspicuous about the impact on its dividend. The second reason is that, not unlike how the bank dealt with its dividend cut, New York Community Bancorp's executives have declined to address why the merger was called off. The bank's formal announcement terminating the merger contained a single sentence:

New York Community Bancorp... and Astoria Financial... today announced that their boards of directors have mutually agreed not to extend the companies' definitive merger agreement, and to terminate the agreement effective January 1, 2017.

Why didn't New York Community Bancorp explain why it abandoned the deal? Maybe its executives aren't comfortable admitting mistakes? Or maybe it was because regulators wouldn't approve the deal, as analysts and commentators seem to believe. If that's the case, then New York Community Bancorp's executives should be embarrassed, as it's relatively uncommon for banks to withdraw merger applications following submission -- typically less than one in five are withdrawn. The final reason that New York Community Bancorp's stock hasn't bounced back is that it's much less efficient today as a result of its preparations for the merger. In 2010, its efficiency ratio, which the bank refers to as a "hallmark of the company," was 36%. That was one of the best ratios in the entire bank industry. Fast-forward to last year and it had grown to 45% -- still very good compared to the industry, but meaningfully higher than its former figure.

Ultimately, it seems clear that investors will continue to be left in the dark about New York Community Bancorp's plans. Its executives have made a habit of avoiding the media. And even when they do make important announcements, they either bury the lede, so to speak, or issue only perfunctory statements. As a result, in my opinion, there are too many unanswered questions surrounding New York Community Bancorp right now to make its stock attractive to rational investors.

Editor's note: The original article stated that New York Community Bancorp's efficiency ratio from 2010 to 2016 went from 45% to 60%. The actual increase was from 36% to 45%. The Fool regrets the error.