Shares of New York Community Bancorp (NYSE:NYCB) have dropped 14% since the $49 billion bank announced its merger with neighboring Astoria Financial (NYSE:AF) last week, but much of the criticism of the deal may be off base. This isn't to say the union is perfect, but rather that its problems are more nuanced than the resulting and much-maligned 32% cut in New York Community Bancorp's quarterly dividend.

The merger, announced last Thursday, brings together two New York City-focused lenders. New York Community Bancorp has cut its teeth over the years lending to owners of rent-controlled multifamily apartment buildings in and around the Big Apple. At the end of the third quarter, a full 99% of its loans held for investment were classified as multifamily or commercial loans.

New York Community Bancorp has benefited from this niche focus in two ways. First, because the vacancy rate of rent-controlled apartment buildings in New York City is essentially zero, New York Community Bancorp's borrowers rarely default. This has led to atypically low losses from defaults. In the financial crisis, its net charge-off ratio, which measures the percent of a bank's loan portfolio that's written off due to defaults, maxed out at only 0.2%, compared to 2.9% among its competitors.

This model lends itself as well to a low expense base. Because the multifamily mortgages New York Community Bancorp originates are larger than residential mortgages, it's able to generate more revenue per transaction than a traditionally focused bank. You can see this by looking at the bank's efficiency ratio, which measures the percentage of net revenue that's consumed by operating expenses -- lower is better. While most banks strive for an efficiency ratio of 60% or less, New York Community Bancorp's was a mere 46% in the three months ended Sept. 30.

Astoria Financial, on the other hand, is more focused on conventional lending. The press release announcing the deal trumpeted Astoria's complementary multifamily lending business, saying that it "originates multi-family and commercial real estate loans, primarily on rent-controlled and rent-stabilized apartment buildings located in New York City." But its balance sheet reveals that Astoria is more heavily invested in residential mortgages, with the latter accounting for 57% of average loans compared to 41% for multifamily and commercial real estate.

Astoria Financial's less focused strategy leaves a lot to be desired. Its efficiency ratio in the latest quarter was 74%, well above New York Community Bancorp's 46%. Its net charge-off ratio peaked in 2009 at 0.77%, better than the industry at large but worse than its merger partner. And since the financial crisis, Astoria's return on assets has remained well below the 1% threshold associated with banks that create, as opposed to destroy, shareholder value. 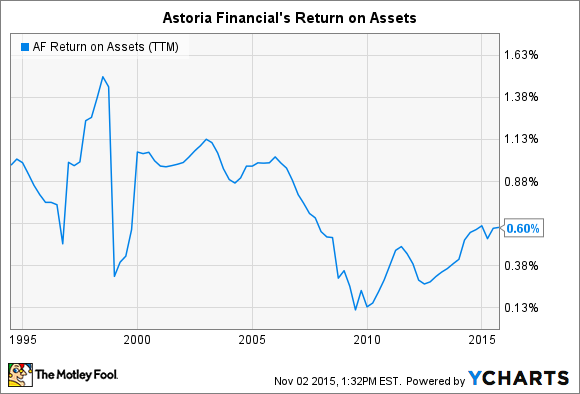 The difference between these costs of funds may seem insignificant, but there are a couple of points to keep in mind. First, New York Community Bancorp was likely most interested in Astoria's $9.1 billion in low-cost "core" deposits, yielding a combined 0.38%. That will replace a significant share of New York Community Bancorp's wholesale funds, and could save the combined institutions upwards of $50 million a quarter in interest expense. Also, unlike New York Community Bancorp's other post-crisis acquisitions, this deal builds on its stronghold in New York City, which will presumably make it easier to manage the new $64 billion company and to realize potential cost savings therefrom.

The fact that Astoria Financial outsources a material share of its mortgage originations makes things worse from a risk management perspective. This is because third-party originators don't have the same incentive to maintain high credit standards as a bank that underwrites a loan to hold in its portfolio. Residential mortgages sourced in this way accounted for $205.5 million, or 55%, of Astoria's home loan volume last quarter. Consequently, not only is New York Community Bancorp departing from its core competency -- lending to owners of rent-controlled apartment buildings in New York City -- but it's compounding the departure by acquiring a bank that outsources credit risk.

The second major issue with the deal, from the perspective of New York Community Bancorp's shareholders, is the potential impact it will have on the bank's notoriously efficient operations. It's bad enough that Astoria Financial is adding its 74% efficiency ratio to the mix, but making things worse is the fact that the combined companies, with total assets exceeding $50 billion, will now be subject to the higher regulatory and compliance costs that come with being a systematically important financial institution. To this end, moreover, New York Community Bancorp must now request approval from the Federal Reserve to increase its dividend each year, which was cut to facilitate the merger.