Please ensure Javascript is enabled for purposes of website accessibility
Log In Help Join The Motley Fool
Free Article Join Over 1 Million Premium Members And Get More In-Depth Stock Guidance and Research
By Jamal Carnette, CFA - Feb 16, 2018 at 8:00AM

Investors and subscribers should know what's going on.

T-Mobile (TMUS 0.13%) continues to outperform competitors under John Legere. Ever since the brash CEO instituted his Un-carrier program, taking aim at every consumer-unfriendly provision in traditional cellphone contracts, the company has rapidly added subscribers at the expense of other carriers. Investors continue to expect strong returns from T-Mobile as evidenced by its having a higher forward P/E multiple than AT&T and Verizon.

In the fourth quarter, T-Mobile's strong growth seemed to stall somewhat and resulted in a sell-off with the stock dropping 5% the day earnings were reported. Although the company recorded $10.76 billion in revenue in its fourth quarter, 5% above last year's total, it was slightly below consensus expectations of $10.83 billion. On the bottom line, the company reported adjusted EPS of $0.48, 7% above the prior year's figure. (On a GAAP [unadjusted] basis, the company reported a significantly higher $3.11 per share, mostly due to gains attributable to the new tax law.) 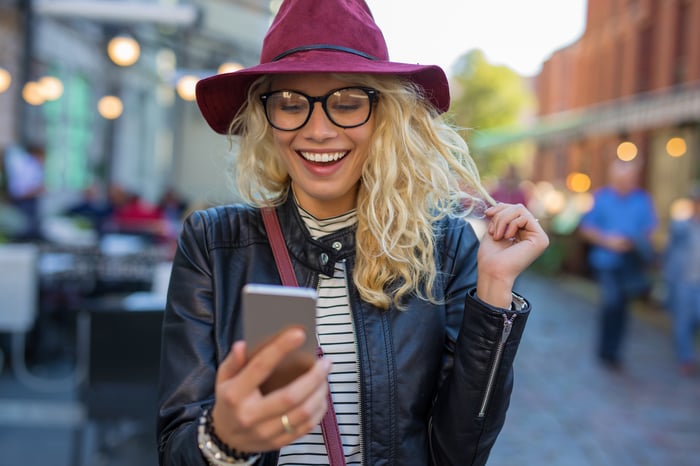 Under Legere, T-Mobile has grown from a minor player in wireless to become one of the "Big Four." For years, AT&T, Verizon, and Sprint formed a wireless oligopoly. T-Mobile was able to increase net customers, mostly at the expense of Sprint, and pushed past the latter to become the third-largest carrier in 2015.

However, the pace of growth did significantly slow over the prior year. In 2016, T-Mobile posted 8.2 million total net adds, and 2.1 million adds in last year's fourth quarter. On a positive note, postpaid phone adds fell at much lower rates of 15% and 5% for the full year and in the fourth quarter, respectively.

The company has guided for between 2 million and 3 million net adds (more on this later) in 2018. Although analysts noted that is a conservative forecast, the fear of new entrants like cable companies and the year-over-year expected drop spooked investors.

2. The company is investing in 5G, but you don't need it yet

Among the Big Four, there's been a hesitancy to roll out fifth-generation (5G) wireless connectivity as the collective $275 billion in capital expenditures for 4G has failed to provide substantive returns. However, recent changes in the U.S. tax code -- mainly, lower tax rates and the provision for immediate capex expensing -- are favorable for 5G buildout, and both Verizon and AT&T have announced they will provide 5G connections to limited markets this year.

T-Mobile announced it would be a little later than AT&T and Verizon, deploying commercial 5G next year and having a nationwide 5G network in 2020. For years, T-Mobile suffered from the perception it had a worse network than other carriers, most notably Verizon. However, T-Mobile notes that 5G-compatible phones will not be available until 2019, which obviates the need for the service until then.

T-Mobile has increased its total subscribers by offering services that cost less than other providers, most notably Verizon, but it seems T-Mobile will compete less on price going forward. In its earnings report, T-Mobile noted it would be selective in the deals it offered to focus on cash flow. This was primarily a reason for the lower-than-expected subscriber growth guidance. This change in focus from pure subscriber growth to balanced growth was also shared by Sprint, where CEO Marcelo Claure discussed raising prices of the company's unlimited-data plans as a way to boost the company's poor financial condition.

Even if cellphone bills increase, look for the industry to continue to focus on value and to improve the subscriber experience. T-Mobile boasted of its relationship with Netflix as an added benefit to subscribers. Likewise, Sprint has teamed up with Hulu, and AT&T offers HBO with its DirectTV app. Subscribers should look forward to more deals and more extras to go along with higher prices.