Please ensure Javascript is enabled for purposes of website accessibility
Log In Help Join The Motley Fool
Free Article Join Over 1 Million Premium Members And Get More In-Depth Stock Guidance and Research
By Danny Vena - Feb 16, 2018 at 9:15AM

Shopify created a one-of-a-kind AR app that caught the attention of the iPhone-maker's CEO.

Shopify Inc. (SHOP 0.54%) has been enormously successful developing an e-commerce platform that helps small- and medium-sized businesses set up and manage an online store. The company simplified the process by creating a one-stop shop that was easy to navigate and put e-commerce within reach for companies of all sizes.

Shopify has taken a number of steps to empower its online sellers, including by offering templates and apps that allow merchants to customize the shopping experience for their customers. The company also integrated payments and shipping solutions into its lineup.

Now Shopify is infusing augmented reality into its offerings, which has attracted the attention of none other than Apple Inc. (AAPL 1.62%) CEO Tim Cook, one of the biggest proponents of the technology. 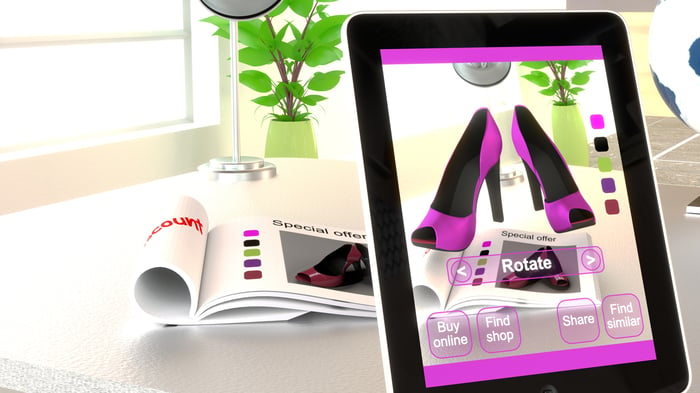 Late last year, Shopify revealed that it had created an in-app augmented reality feature in conjunction with Chip and Joanna Gains, from HGTV's program Fixer Upper, for their home and lifestyle brand Magnolia. The AR app allowed customers to see how specific housewares would look in their homes by placing virtual objects into the space using the camera on their phone. The ability for online shoppers to see how a potential purchase would actually look against the backdrop of their home could be a groundbreaking technology in the realm of e-commerce.

These AR innovations caught the attention of Cook, who made a surprise visit to Shopify's Toronto headquarters. Cook was treated to numerous demonstrations that incorporated an iPad and apps built on the ARKit platform that Apple debuted last year. Shopify CEO Tobias Lutke said that the company will use the technology to "become the largest AR-enabled e-commerce platform."

Cook said he's a "big fan" of Shopify. "I love the fact that their focus is on democratizing technology for entrepreneurs that are largely artisans and bringing their products to market so that these merchants can focus on what they are great at," Cook told the Financial Post.

Ramping up for the future

With the debut of iOS 11 and ARKit last year, Apple put the world on notice that the company has big plans for AR-infused apps. Building the technology into its operating system was what Cook called the "first step" in making AR a mainstream experience. Apple also designed the iPhone 8 and X models with AR in mind, and debuted several cutting edge AR applications with the release of its most recent iPhones.

The release of ARKit was a game-changer according to Shopify, because it created more realistic AR where the virtual objects that were created were "almost indistinguishable from the reality they're dropped in," according to Braveen Kumar, a content creator for Shopify.

Tim Cook has made no secret about his enthusiasm for AR. In an interview last year when asked about the nascent technology, he said, "I think it is profound. I am so excited about it, I just want to yell out and scream... It's time to put the seat belt on and go. When people begin to see what's possible, it's going to get them very excited -- like we are, like we've been."

Augmented reality is just getting started, but with the potential market for the technology it could be huge, exceeding $50 billion by 2024, according to estimates by Global Market Insights. This would represent a compound annual growth rate of 75% between 2017 and 2024.

Both companies have a lot to gain by being among the earliest adopters of AR. The iPhone 8 and X featured innovative uses of AR that will be tough for the competition to replicate due to patents and exclusive deals with suppliers.

For its part, Shopify is creating a competitive edge that gives its merchants even more reasons to love its platform.

This may not be the last we hear of this partnership.