In its recently released fourth-quarter and full-year earnings report, NVIDIA (NVDA -5.26%) showed the world that it could continue to put up blockbuster revenue and earnings numbers. The company grew revenue 34% over the prior-year quarter, while data center revenue based on AI (artificial intelligence) produced triple-digit year-over-year growth for the seventh consecutive quarter. It also beat analysts' estimates on both its top and bottom lines to produce a record-setting quarter.

These were just some of the takeaways from the graphics-processing company's solid results. NVIDIA's earnings conference call also gave investors plenty of insight into the future, as the company's management talked cloud computing, deep learning, and self-driving cars. 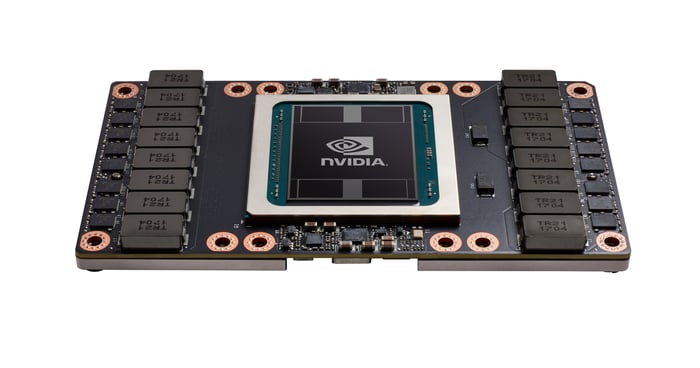 NVIDIA's data center revenue of $606 million grew 105% year over year, and 20% sequentially. This segment now accounts for nearly 21% of the company's sales. So what's driving that astronomical growth? The biggest contributors have been cloud computing and artificial intelligence.

Companies are seeing a growing number of strategic uses for cloud computing. During NVIDIA's second quarter, it began shipping its Tesla V100 processor, which the company calls "the world's most advanced data center GPU ever built" -- and enthusiasm for the processor continued into the most recent quarter.

CFO Colette Kress pointed out that performance during the quarter "reflected strong adoption of Tesla V100 GPUs," and went on to reveal a veritable who's who of cloud customers:

V100s ... have been chosen by every major cloud to deliver AI and high-performance computing.

In addition to cloud computing, the revolutionary AI technique of deep learning has also been seeing greater and greater adoption across a wide range of businesses, and the ability of GPUs to accelerate that process has made NVIDIA the go-to for training deep-learning systems.

In recent years, NVIDIA has benefited from the training phase of deep learning, but there is growing demand in the "inference" phase, which is the function an AI system carries out after its training has completed -- like performing image recognition or language processing.

What will drive future growth?

In reviewing NVIDIA's results, investors might initially be disappointed by the lagging growth in the auto segment, which increased only 3% compared to the prior-year quarter. In recapping the company's results, Kress pointed out that NVIDIA was transitioning out of the infotainment market, which it believes has become commoditized, and is focusing on self-driving systems. Later, Huang laid out how the company will profit from the ongoing evolution in autonomous and self-driving systems:

Huang went on to say that we should expect to see more cars with autonomous driving capabilities by late 2019, with nearly every premium car having autonomous features by 2022.

More of the same?

NVIDIA has been on a tear in recent years, with its share price doubling over the last year, and up 1,000% since early 2015. While the company may not put up the same staggering performance in the future, the combination of continued innovation and numerous tailwinds will likely help it produce market-beating results for years to come.