The two brewers have been inching closer to a deal for years. 2018 could be the year it finally happens.

If Anheuser-Busch InBev (BUD 2.10%) and Craft Brew Alliance (BREW) were to get any closer, they'd be on opposite sides of one another. They are so enmeshed in each other's affairs that it's probably time the mega brewer just bought out the craft beer maker, and in fact, that may be what's happening.

Earlier this month Craft Brew Alliance, which is comprised of seven regional brewers, preannounced its 2017 full-year earnings that showed double-digit depletion growth for its Kona Brewing brand, gross margin expansion, and per-share earnings of $0.14, a big U-turn from the $0.02 per share loss it recorded last year. At the same time, it announced a new agreement that will expand its relationship with Anheuser-Busch, which might indicate an even bigger deal is on the horizon. 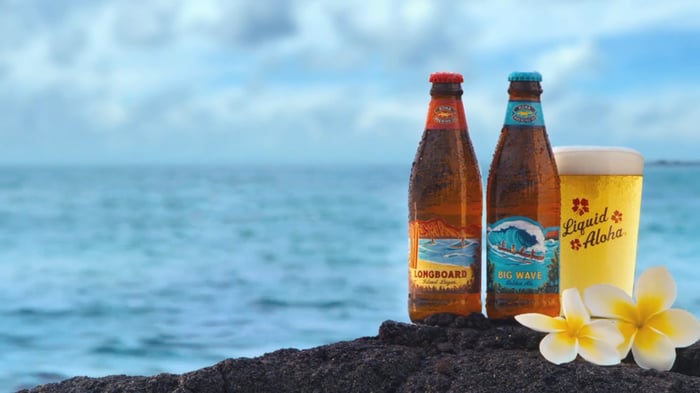 A-B on a spending spree

Over the past few years A-B has acquired nearly a dozen craft brewers, including Breckenridge Brewing, Devil's Backbone, Four Peaks, and Wicked Weed Brewing, But those additions haven't helped stem the slide in beers sold in North America, where the company suffered a steep 6.2% drop in the third quarter.

While craft beer in general is expected to grow at around 6% in 2017, the U.S. beer industry is expected to show a decline. Over the past three decades, per capita beer consumption has dropped 20%.

As part of their new agreement, Craft Brew Alliance will take on brewing responsibilities for Anheuser-Busch’s craft beer subsidiaries in cases where using an A-B facility would be inefficient. They'll see how the agreement works out this year, and if it's satisfactory to both sides, they'll continue the contract into the future. Craft Brew Alliance owns and operates breweries in Portland, Ore., and Portsmouth, N.H., along with some other offsite warehouses.

Independent in name only

Anheuser-Busch already owns 31.5% of Craft Brew Alliance, which is the primary reason the craft beer industry's trade group Brewers Association doesn't recognize the brewer as a craft brewer. One of the criteria is that a brewery has to be independent, which has been defined as having 25% or less of its operations owned or controlled by a large brewer.

In addition to the ownership stake, A-B also has additional say in how Craft Brew Alliance operates:

In 2016, Craft Brew Alliance began transferring production out of its Memphis facilities and into A-B's breweries. Given that the two are familiar with each other's production practices, it makes it easier for Craft Brew Alliance to take up some of the responsibilities for Anheuser-Busch's craft subsidiaries as the partnership expands. But it would also make sense for A-B to just outright buy CBA at this point. By blending together their operations in this manner, Anheuser-Busch may be setting the stage for an eventual combination.

Another hint is that CBA's vice president of its emerging business unit has left the company as the brewer closes down the division. The emerging business unit would target certain markets for its beers and enter into strategic partnerships with small brewers in the region, such as Appalachian Mountain Brewery in Boone, N.C., and Cisco Brewers in Nantucket, Mass. Moving away from a merger and acquisition focus to one concentrating on "innovation," would streamline it ahead of a buyout offer.

If Anheuser-Busch InBev does move to buy Craft Brew Alliance, the deal would almost certainly trigger an official Department of Justice review. While it's been speculated about for years that a merger would happen, now that both brewers are even more intertwined, each supporting the other's progress, this year may just be when the mega brewer finally takes the leap.