Please ensure Javascript is enabled for purposes of website accessibility
Log In Help Join The Motley Fool
Free Article Join Over 1 Million Premium Members And Get More In-Depth Stock Guidance and Research
By Daniel B. Kline - Updated Feb 16, 2018 at 9:18AM

A new partnership allows newlyweds to add all sorts of experiences to their gift wish list.

For a long time, wedding registries were staid lists of fancy dinnerware, pots and pans, kitchen appliances, and other things a new couple might need to start their lives together. More recently, Generation X wedding registries stayed in the same genre, but the items requested might veer more toward everyday use than the plates and silver that get kept in a special cabinet for use only on holidays.

Millennials, however, are changing the game further. They have pushed a new trend where experiences -- everything from a dream honeymoon to concert tickets -- have become an increasingly acceptable choice for a wedding registry.

In fact, from 2006 to 2016, the percentage of wedding registries that included a honeymoon rose from 5% to 20%, according to a blog post written by Sara Margulis, CEO of Honeyfund, a site that helps you raise money for a honeymoon and more. Now, Margulis' company has partnered with Target (TGT -0.47%) so the retailer can offer honeymoons (as well as other experiences) on its wedding registries. 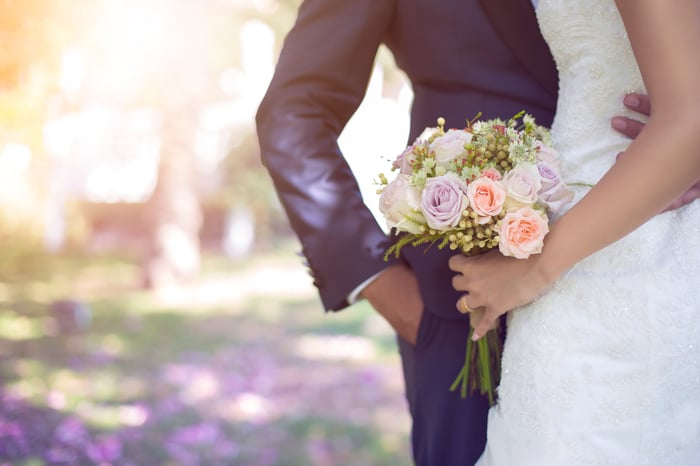 When older generations got married it was more likely that the couple was creating their first adult household together. In 1970, the average woman was 20.8 when she got married while the average groom was 23.2, according to a U.S. Census Bureau survey. That has since increased to 25.1 years for women and 26.8 years for men.

With people being older when they get married, there's more of a chance they've already got what they need to set up housekeeping. And, of course, there have been countless articles written on how millennials value experiences over stuff.

Target is riding the wave. It has made it so people can add Honeyfund as a choice within their Target registry. That makes it easy for couples to request that people help them pay for their honeymoon alongside their requests for a new coffeemaker, bedding, bath towels, and whatever else they might want.

Honeyfund's site allows users to link to retailer registries and Target is the first retailer to embed Honeyfund into its registry. "Our registry team wanted to make sure we were providing a modern experience," Target spokeswoman Jamie Bastian told the Star Tribune.

Honeyfund lets users either convert the gifted money into zero-fee digital gift cards or withdraw it as cash for a 2.8% fee plus $0.30 per transaction. The gift givers do not pay any fee.

Helping brides and grooms raise money for a dream trip or other purpose is a smart idea that's part of a larger strategy by the retailer to modernize in order to serve a changing marketplace. Adding honeymoons and other experiences to wedding registries goes well with the chain's efforts to offer same-day shipping, move to an omnichannel model, launch more private label brands, and revamp its stores to suit how customers shop in 2018.

On its own, adding honeymoons to wedding registries is not a big deal. As part of a broader effort to serve millennials and younger generations, it's a nice piece of the puzzle for Target's future success.