After launching breakfast options at Taco Bell, Chipotle's incoming CEO could do the same for the struggling burrito chain.

Taco Bell, which is known for innovations like the Doritos Locos Taco, is everything that Chipotle, with its "Food with Integrity" platform, tries not to be. But the decision to go with a leader from traditional fast food could signal that Chipotle is ready for a change.

As CEO of Taco Bell for the last three years and president prior to that, Niccol guided Taco Bell's comeback and transition into a lifestyle brand with a successful social media campaign and innovations like the Cantina Bell, Taco Bell's take on fast casual, and introduced mobile order and payment to 7,000 restaurants.

Niccol said he would "focus on dialing up Chipotle's cultural relevance through innovation in menu and digital communications," in an effort to "attract customers, return the brand to growth, deliver value for shareholders and create opportunities for employees."

While there are a number of reasons that Niccol seems like a good choice, including his experience with a large chain, familiarity with a Mexican food brand, and success with social media, one of his accomplishments stands out among the rest. Niccol was responsible for Taco Bell's launch of breakfast. 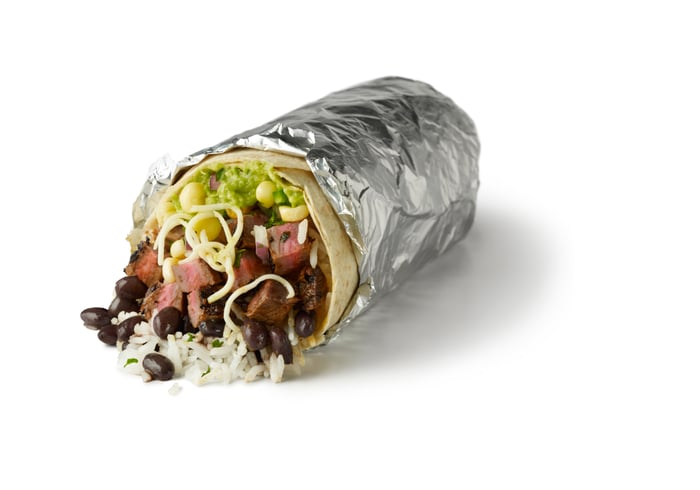 The most important meal of the day

Chipotle fans have long clamored for the company to offer breakfast, as an egg-filled burrito sounds just as tasty to them as the chain's usual fare, but management has largely resisted calls to open in the morning. The restaurant previously experimented with breakfast burritos at two airport locations, Washington's Dulles Airport and Baltimore-Washington International Airport; however, the company did not find the demand to be strong enough to continue offering them.

Still, there's no question that breakfast has been a winner for much of the fast-food industry. McDonald's(MCD -1.70%) launch of all-day breakfast in 2015 helped spark a streak of strong comparable sales growth, and breakfast menu items make up about 15% of McDonald's sales. Taco Bell saw a similar bump in sales after it introduced breakfast in 2014, and it's clear why so many brands have been eyeing a piece of the a.m. market.

The morning meal tends to be more profitable for fast-food chains as items like eggs and coffee generally offer higher margins than the proteins that lunch and dinner center on, like chicken and beef. Fast-food breakfast is also especially popular with millennials, some of whom identify as breakfastarians, or people who eat breakfast foods at all hours of the day.

Beyond its impact on the bottom line, breakfast could be even more important in resurrecting Chipotle's brand. McDonald's answered customers' longtime demands for all-day breakfast, and the response has been a major driver of the company's recent sales surge. McDonald's said that all-day breakfast led to incremental business by attracting new customers and delivering larger order sizes.

Chipotle has an opportunity to similarly change the conversation with its own breakfast launch, which would give current customers a reason to visit more often and lapsed ones a reason to try the brand again. The demand is clearly there.

If chipotle would just take my advice and make breakfast burritos they'd be the world's dominant superpower right now. @ChipotleTweets

Chipotle should get itself into the breakfast burrito biz. Just sayin.

After squandering a similar opportunity with queso, the need to build brand excitement with something like breakfast is greater than ever, and Niccol seems like the ideal person for the job with his experience launching breakfast at another Mexican concept. We'll learn more when Niccol officially takes the position on March 5, but demand for breakfast at Chipotle should only heat up, and the morning meal could be his first big initiative at the helm.