The hand-wringing over the stock is getting ridiculous. Facebook's doing much better than the headlines indicate.

Bashing Facebook (META -2.03%) has become popular lately. Tech observers have been increasingly wary of the addictiveness of social media, and they are asking if Facebook is actually good for society. Others have claimed the company is simply too powerful, citing its influence on the 2016 election and the way it was manipulated by Russian operatives.

In a recent headline, Wired called the company's last two years "hellish" and featured a battered and bruised image of CEO Mark Zuckerberg on the cover. Facebook itself has gotten in on the introspection, asking its users directly if they think it's good for the world. 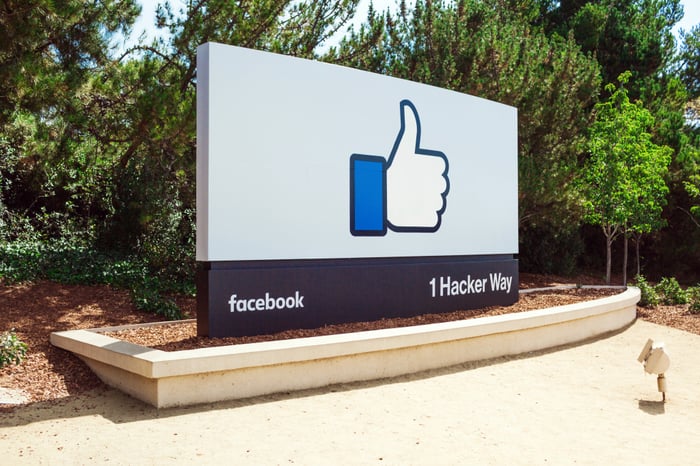 If the last two years have been hellish, investors may want to root for more fire and brimstone as the stock has gone up 76% in that period. The company gave investors a jolt a few weeks ago when it said it would deemphasize publisher content, like news and viral videos, in favor of friends' photos and posts to encourage better connections, a move it thought may reduce time on the app. It also reported its first-ever decline in daily active users in North America last quarter, a potential sign of Facebook fatigue. But those issues are blips in the company's continuing rise rather than the real cause for concern.

Take a step back and pretend you don't know what company I'm talking about. What would you think of a company with these numbers last year?

I think you'd probably want to own that stock.

It's rare to see a company of any size with that kind of growth, profit margin, and valuation, let alone one the size of Facebook. For all of the obsessing over Facebook's problems, investors seem to forget that this company is growing (much) faster than Amazon and has fatter operating margins than Alphabet, or pretty much any publicly traded company. That's evidence of how strong Facebook's business is. The reasons to bet on its future greatly outweigh the reasons to bet against it, in spite of what the bears say. Here are a few of them.

Facebook, and also Google, have seen such consistent growth in their advertising businesses because they provide so much value to advertisers. No other platform offers the level of targeting that Facebook does -- it can pinpoint potential customers based on age, gender, zip code, and characteristics like college attended and hobbies or interests. Long gone are the days when marketers' best idea was to put splashy full-page ads in newspapers and hope the right audience would notice.

The company also provides advertisers with detailed data on their campaigns, such as impressions, potential reach, clicks, and app installs, so businesses can determine if they're getting a good return on their investments. Those tools and targeting ability have helped give the company advantages over rivals like Twitter and Snap's Snapchat, as well as more traditional ad platforms.

Even while criticism of Facebook piles up, its sister site, Instagram, is crushing it. Though Facebook doesn't report quarterly users for Instagram, it did say that monthly users on the photo-sharing site passed 800 million in September, just five months after it topped 700 million. In other words, Instagram is growing its membership by about 30% a year. The app is already much bigger than Twitter or Snapchat and makes Facebook's $1 billion purchase of it in 2012 look like one of the best deals of the century.

Instagram Stories, a feature it co-opted from Snapchat, quickly gained more users than Snapchat itself, showing that in social media the platform -- with its network effects and other built-in advantages -- may be more important than the features. And like Facebook, the network has proven itself to be a hit with advertisers.

3. Rumors of a backlash have been greatly exaggerated

It's true that users on average may be spending less time on Facebook; the company noted that time on the site fell by about two minutes per user in the most recent quarter, and North American daily users declined slightly in the quarter as well. However, the overall user base continues to grow steadily. In the most recent quarter, daily and monthly users both increased 14% to 1.4 and 2.13 billion, respectively, and it seems that much of the perceived backlash against Facebook and decline in time on the site are due to cannibalization from Instagram. The photo-sharing site has become more popular with teens and young adults than its parent, and its rapid growth should make up for any potential setbacks with Facebook.

Meanwhile, with Facebook Messenger and WhatsApp, the company will soon have four properties each with more than 1 billion users, and Facebook has barely started monetizing WhatsApp. Oh, and there's also Oculus, the virtual reality system.

A mass exodus from Facebook would certainly be devastating, but it's not going to happen. Facebook's network effects are too strong, and it's already adequately defended itself against its only reasonable rivals, Twitter and Snapchat. The future is a lot brighter for the company than the naysayers claim. It's time for the bears to go back into sleep mode.