It's about time that Facebook (NASDAQ:FB) starting taking WhatsApp monetization more seriously. It's long overdue, even by Facebook's own standards. When Facebook acquired WhatsApp in 2014, the popular messaging service had 450 million monthly active users (MAUs). On the 2014 conference call to discuss the acquisition, CEO Mark Zuckerberg suggested that Facebook really only starts thinking about monetization once a service gets to 1 billion users:

Our explicit strategy is for the next several years to focus on growing and connecting everyone in the world. And then we believe that once we get to being a service that has billion, two billion, maybe even three billion people one day, that there are many clear ways that we can monetize, but the right strategy we believe, is to continue focusing on growth and the product and succeeding in building the best communication tools in the world.

But WhatsApp hit 1 billion MAUs in February 2016 -- nearly a year and a half ago. The most recent update was reaching 1.2 billion MAUs in February of this year. Yet monetization efforts have seemed like an afterthought, and as an investor I'm still concerned that Facebook overpaid and the amount of goodwill associated with the deal is a time bomb waiting to be written down.

Recode reports that WhatsApp is now hiring for positions that specifically focus on monetization. One position, a product manager for monetization, is directly tasked with developing products that will contribute to monetization. In the description, WhatsApp is looking for a candidate that "has an empathy for both consumers and businesses" and can "unlock the potential of WhatsApp to serve millions of businesses." This all hints at WhatsApp's plans to help businesses connect with consumers; Facebook Messenger will use a similar model.

Messenger and WhatsApp are both messaging platforms, so the two services' revenue models will likely resemble each other as Facebook continues to plot its strategy. The main difference is geographical: WhatsApp is hugely popular in emerging markets and effectively a replacement for traditional SMS text messages, while Messenger is more popular in developed markets like the U.S. Messenger added peer-to-peer (P2P) payments a long time ago, and reports surfaced in April suggesting that WhatsApp was looking to create a P2P payments service for India.

The news comes following a setback in China, which has started blocking and censoring parts of the service. WhatsApp is not officially banned like Facebook's core platform, Facebook's Instagram subsidiary, or Twitter, but it's not much of a stretch to think it could be soon.

I'm generally bullish on Facebook, but I remain skeptical of the WhatsApp deal even now, three years after the fact. WhatsApp is Facebook's largest acquisition to date -- by far. 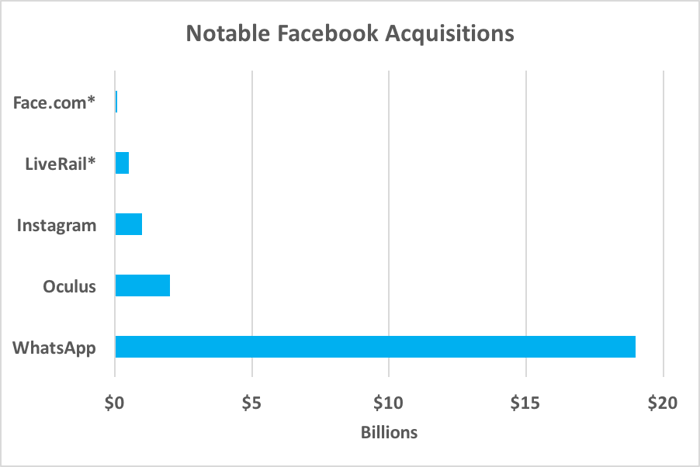 And WhatsApp's financials at the time of acquisition were covered in red, losing $312 million on $23 million in revenue over the prior 12 months. There was hardly any book value to speak of, which is why nearly all of the purchase price was assigned to goodwill and net intangible assets. Put another way, Facebook paid more for WhatsApp in 2014 than Twitter is worth today. Twitter hasn't exactly been an outperforming investment, but as a business it has brought in $2.5 billion in revenue over the past year (losing $439 million in the process).

As a shareholder myself, I don't want this time bomb to explode, but I'm still afraid it will at some point. I'm slightly relieved that Facebook is now putting some more serious effort into building WhatsApp as a business.