Supply-chain rumors indicate that Apple could kill the device, but that seems quite unlikely given its effect on average selling prices of iPhones.

The Apple (AAPL -2.98%) supply chain has been rife with rumors that the iPhone maker will end production of its flagship device this year. Noted Apple analyst Ming-Chi Kuo of KGI Securities believes that weak demand for the iPhone X is forcing the company to reduce component orders.

Kuo says production of the iPhone X will be halted later this year when the new 2018 models go into production. This effectively means that Apple will kill its most lucrative product within just one year of release. The company's weaker-than-expected guidance for the quarter that includes March has also added to the speculation, as it is believed that the iPhone maker miscalculated the market size for such an expensive phone.

But in my opinion, it is highly unlikely that Apple will cease production of the iPhone X anytime soon. Here's why: 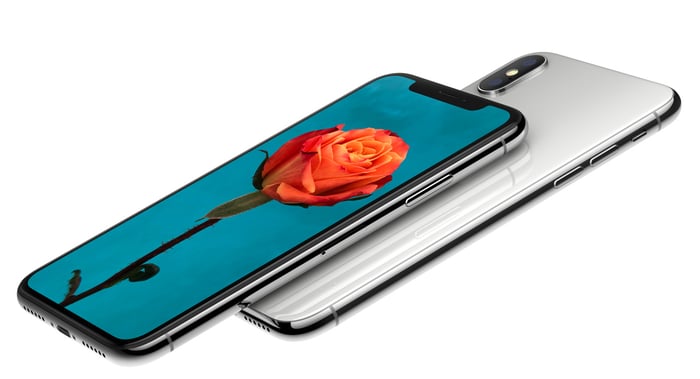 The market was disappointed with Apple's iPhone shipments last quarter. The company shipped 77.3 million iPhones during the quarter including December, down 1% from the prior-year period, when the quarter had an extra week. Wall Street, on the other hand, was looking for 80 million in iPhone shipments, and Apple would have easily exceeded that mark had there been an extra week, like the prior year.

Still, Apple's iPhone revenue shot up 13% year over year during the quarter that included December thanks to a massive bump in average selling prices (ASPs). The ASP of an iPhone during the recently reported quarter jumped 14.5% year over year from $695 to $796. By comparison, the company had seen a far slower jump of just 4% during the same quarter last year, so it is evident that the iPhone X, which starts at $999, has an important role in boosting sales.

Furthermore, the midpoint of Apple's guidance for the quarter including March calls for a 16% year-over-year jump in revenue. This is significantly better than the 4.5% year-over-year revenue jump the company had posted in last year's corresponding quarter.

Clearly, it doesn't make financial sense for Apple to discontinue the production of the iPhone X.

Recent results from Apple suppliers such as Qorvo (QRVO -1.25%) and Lumentum (LITE -2.27%) provide more indications that the iPhone X isn't going to be killed anytime soon. Qorvo management, for instance, recently claimed that the company is going to see the "largest actual generation-over-generation content increase we have seen driven by many product categories."

First, as reports suggest, it seems to have won business from one of its rivals in Apple's supply chain. Second, Apple will continue making all three iPhones during the next product refresh, because had that not been the case, Qorvo's addressable market would have dropped due to lower device production.

Lumentum's outlook provides more concrete evidence that the iPhone X will be refreshed this year. Lumentum supplies the laser dot projector hardware that enables Face ID in the iPhone X, and it expects sales from this business to double in the second half of 2018. This is a very ambitious statement in the first place, and the only way Lumentum can achieve such impressive growth is if the iPhone X -- and its future iterations -- remain in production.

Furthermore, Apple wouldn't have advanced $390 million to one of its suppliers last December to ramp up production of iPhone X parts had it been looking to discontinue the device.

According to CEO Tim Cook, the iPhone X has been Apple's "top-selling iPhone every week since it shipped in November." This device is powering Apple's ASPs higher and accelerating its growth in the process. Cupertino won't be foolish enough to pull the plug on the iPhone X as rumors suggest.