Finisar's (FNSR) investors got a big boost in mid-December when  Apple (AAPL 0.40%) revealed that it is investing $390 million in the optical components specialist. The stock soared over 20% in a day after declining for the better part of the year, giving investors some respite going into the holiday period.

Finisar now has the much-needed ammunition to go after the fast-growing market for vertical-cavity surface-emitting laser (VCSEL) technology, which enables augmented reality (AR) and 3D sensing applications such as the Face ID on the iPhone X. The company has been constrained by a lack of VCSEL production capacity, so Apple's investment comes as a big boost as it sets Finisar on its way toward impressive revenue growth. 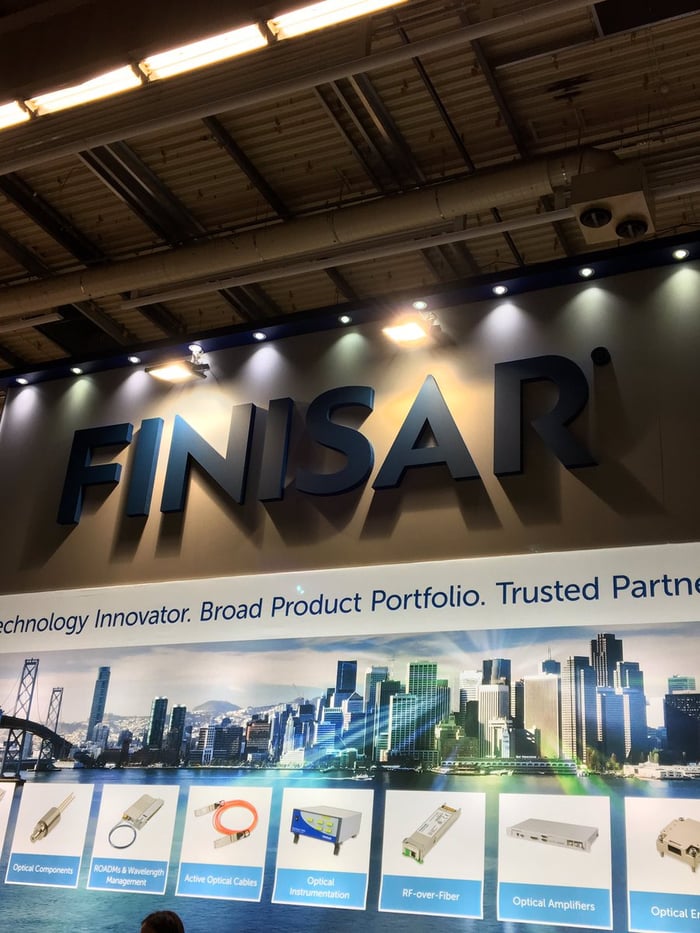 Finisar makes its way into the Apple ecosystem

Finisar was rumored to be in line to supply Apple with VCSEL arrays to enable the Face ID feature in the latest iPhone X, but rival Lumentum (LITE -0.58%) ran away with this business as Finisar reportedly had trouble meeting Apple's requirements. Not surprisingly, Lumentum is witnessing a big boost in its business thanks to the massive uptake of its 3D sensing chips by Apple. The company's revenue in the December-ended quarter could rise around 36% year over year as it reportedly got $300 million worth of 3D sensing orders from Apple since April.

But Apple doesn't want to rely on a single VCSEL vendor, as evident from its Finisar investment. In fact, this investment seems quite logical as Apple has reportedly found it difficult to meet iPhone X production targets due to lack of 3D sensing components. Mizuho analyst Abhey Lamba estimates that iPhone X production could be 8 million lower than originally anticipated due to yield issues with Face ID components.

This is where Apple's investment comes into play, as Finisar can now reboot a 700,000-square-foot facility in Sherman, Texas. This should increase its VCSEL output substantially, helping it take advantage of Cupertino's growing focus on AR applications and integration of Face ID across its product line. In fact, the iPhone maker says it plans to "purchase 10 times more VCSEL wafers [in the fourth quarter of 2017] than were previously manufactured worldwide over a similar time period."

This shouldn't be surprising as Apple is reportedly designing an iPad Pro with Face ID that could go on sale next year, and it could also include the same in the Mac. This could create a huge opportunity for Finisar as each VCSEL array reportedly costs Apple $5.

Apple could manufacture between 222 million and 252 million iPhones next year according to Mizuho, while the addition of Face ID to the iPad and Mac models would further increase its use. Finisar is expected to begin selling VCSEL chips to Apple from the second half of 2018.

Not surprisingly, analysts forecast that Finisar's top line could increase over 11% in the next fiscal year as compared to a 6.2% drop in the current one.

Finisar hasn't disclosed much about the terms of the Apple deal, including whether it limits to whom Finisar can sell. But the chipmaker has clarified that Apple's investment is neither in the form of equity or debt, as it is an advance payment for components.

Therefore, Apple has effectively locked in Finisar's VCSEL supply, at least till the time the chipmaker fulfills its advance payment. There isn't much clarity about what will happen after the agreement runs out, but the good news for Finisar investors is that the company's VCSEL development timeline has been bumped up with the help of this money.

Finisar has over $1.2 billion in cash, and its debt-equity ratio of 0.44 is lower than Lumentum's ratio of 0.50. Moreover, Lumentum's cash position of $532 million stands nowhere close to Finisar's, which now has an advantage over the former thanks to the Apple deal. Therefore, Finisar can now use its lower leverage, stronger cash position, and the Apple money to build out its VCSEL capacity at a faster pace, as well as ramp up its research and development.

This will bolster the company's standing in the fast-growing VCSEL and 3D sensing module market, which could hit $14 billion in revenue by 2020 as compared to just $1.5 billion this year. Investors, therefore, should definitely think of capitalizing on Finisar's stock price weakness this year to ride the VCSEL gravy train.