Please ensure Javascript is enabled for purposes of website accessibility
Log In Help Join The Motley Fool
Free Article Join Over 1 Million Premium Members And Get More In-Depth Stock Guidance and Research
By Adam Levine-Weinberg - Feb 19, 2018 at 11:35AM

Frontier Airlines is sticking with a unique strategy of serving smaller markets with a few flights a week. Competitors' behavior could determine whether or not Frontier succeeds.

Over the past few years, U.S. ultra-low-cost carrier Frontier Airlines has tried to carve out a new niche for itself by focusing on less-than-daily service to small and midsize cities. This strategy is allowing Frontier to grow rapidly without engaging in too many head-to-head battles with larger rival Spirit Airlines (SAVE 5.18%).

On the other hand, Frontier's entry into less popular markets is increasingly putting it into competition with legacy carriers like United Continental (UAL -1.34%). It will be interesting to see how these new competitive dynamics impact airline industry pricing in the next year or two.

Frontier announces another round of expansion

Frontier Airlines has aggressive growth targets. The company plans to triple in size by 2026 or 2027. As a result, it is adding new routes at a breakneck pace.

Frontier announced more than 40 new routes just in the first two weeks of this month, mainly from three key markets: Austin, Philadelphia, and Raleigh-Durham. Most of these routes will start up this spring and will operate seasonally. 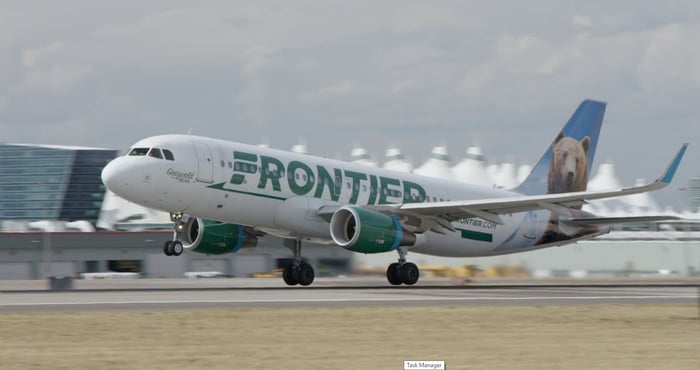 For many of its new routes, Frontier Airlines will be the only airline offering nonstop service. The carrier believes that it can successfully operate in markets that larger airlines like United have passed over because it is willing to fly those routes just two or three times a week. Frontier is betting that plenty of travelers will prefer its low fares and nonstop flights over the flexibility offered by legacy carriers that offer more flight options via their hubs.

Some readers might recall that top ultra-low-cost carrier Spirit Airlines has also made a move into midsize cities in the past two years. That said, Spirit's route strategy is quite different from what Frontier Airlines is trying to do.

Whereas most of Frontier's new routes will operate just two or three times a week, Spirit Airlines primarily tries to find markets where it can offer daily service. There aren't many destinations capable of attracting that much traffic from small and midsize cities. As a result, Spirit's new routes are heavily concentrated in warm-weather leisure destinations: Florida, the Caribbean, Las Vegas, Cancun, New Orleans, and Myrtle Beach.

By contrast, Frontier Airlines is experimenting with niche markets that don't have lots of natural demand, such as Austin-Omaha, Raleigh/Durham-Buffalo, and Des Moines-San Francisco. The advantage of this strategy is that there is little or no nonstop competition on these routes. On the other hand, it could be harder to stimulate demand. Moreover, it's unclear whether there will be any competitive reaction by legacy carriers.

The biggest challenge faced by ultra-low-cost carriers like Spirit Airlines and Frontier Airlines in recent years has been the move by legacy carriers like United Continental to match their prices where they compete directly. United's management sees price-matching as a winning strategy -- and far better than the alternative of losing market share in its hubs.

Most of Frontier Airlines' new routes won't present this kind of direct challenge to the legacy carriers. However, they could undermine an equally lucrative part of the legacy carrier business model: high-yield connecting traffic from small and midsize cities.

For example, in early June, Frontier will start flying three times a week between Des Moines and San Francisco. Today, nobody offers nonstop service on this route, and traffic is dominated by the three legacy carriers, which charge high fares. Few business travelers will use Frontier because of its cramped seating and infrequent service. However, plenty of leisure travelers have flexible schedules and would choose a nonstop Frontier flight over a significantly more expensive connecting ticket on one of the legacy carriers.

Individually, none of Frontier's new routes will have a material impact on rivals like United. But collectively, they will gradually skim off high-margin revenue from the legacy carriers. Thus, the legacy carriers will have to decide in the next few years whether to extend price-matching tactics to connecting routes. Their response will likely determine whether Frontier's expansion in small and midsize cities pays off.