Please ensure Javascript is enabled for purposes of website accessibility
Log In Help Join The Motley Fool
Free Article Join Over 1 Million Premium Members And Get More In-Depth Stock Guidance and Research
By Brian Stoffel - Feb 20, 2018 at 8:11AM

Are millennials to blame?

Dividend-paying companies are the cornerstone of a great retirement portfolio. And as well they should be: These are usually companies that have enormous moats protecting their business, a hefty war chest, and a history of continually increasing the annual payment to shareholders.

On paper, Procter & Gamble (PG -0.76%) has all of that. The company currently offers a 3.4% yield, has been paying a dividend since 1891, and has a remarkable record of 64 consecutive years with an increase. It also has some of the most powerful brand names in consumer staples: Pampers diapers, Tide detergent, and Gillette razors, to name just a few.

And yet, I don't think there's anything but pain ahead for shareholders -- and retirees should approach with caution. 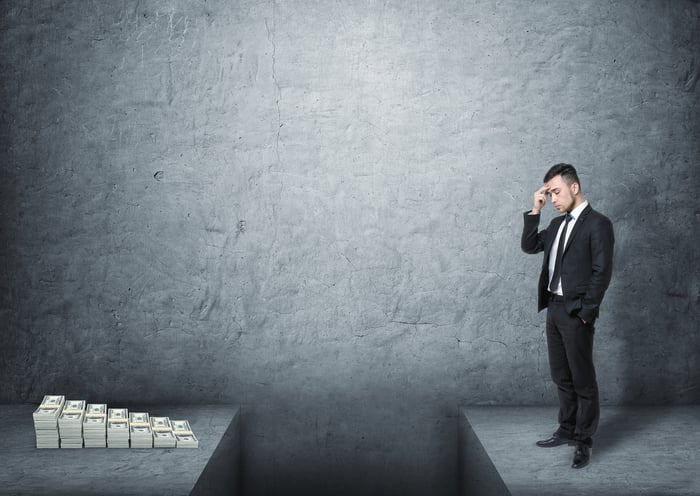 The ground is shifting under P&G's feet

If you're a long-term, buy-and-hold investor, there's nothing more important to understand about your investments than the sustainable competitive advantages -- or moats -- that protect them.

In consumer staples, the most important moat -- by a long shot -- is brand value. Because consumers come to trust certain big brands, they are willing to pay incrementally higher costs every year over generic alternatives. This gives companies like P&G reliable sales increases through pricing power.

But that moat is crumbling. No one has highlighted that trend better over the last few months than Mike Alkin, a former hedge fund manager. At a January conference in Vancouver, he pointed out a troubling new reality for consumer staple companies: "The demographics behind the surge in demand for these products over the past 15 years is changing -- for the worse."

He goes on to point out that baby boomers -- who are loyal to the types of brands P&G has -- will be entering retirement. But that's a problem: "[There is a] 40% decrease in spending from 45 to 74 [year-olds]."

Of course, that wouldn't be a problem if the next generation -- millennials -- could pick up the slack. But that, argues Alkin, won't be happening:

More than half [of millennials] have no use for the brands that marketers spent their careers building...They want a home spun brand story that is authentic...[and] when big brands buy the smaller brand, it loses its appeal.

That last part is crucial, as the modus operandi for consumer staples companies has normally been for behemoths to buy the disruptive upstarts and gain all their customers. Now that millennials have the tools and wherewithal to monitor who is behind everything they are buying, that strategy won't be working.

Of course, a thesis is just that -- a guess about what's going to happen in the future. As it stands, P&G has still generated an incredible $10.2 billion in free cash flow over the past 12 months. And it only needed to use 71% of that free cash flow to pay its dividend -- leaving a moderate amount of room for growth.

But much of the company's recent performance as far as free cash flow is concerned can also be traced to the company's cost-cutting measures. Over the past five years, operating expenses have been slashed an astounding 29%. There's nothing wrong with efficiency, but there are also limits to how far it can go.

If we look at sales, that may give us a better idea for how much traction P&G has with customers. Here again, though, we find a troubling pattern. 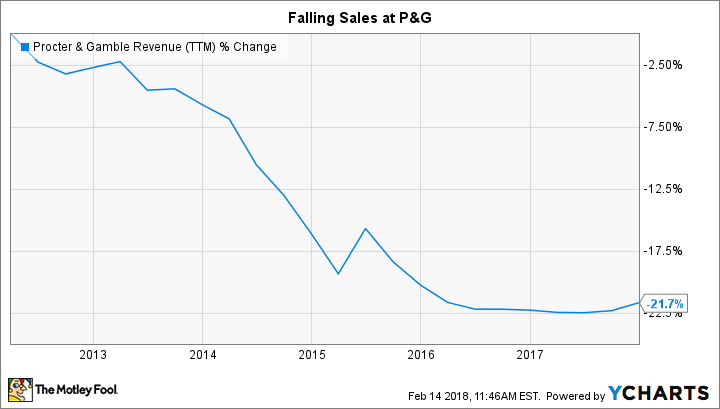 Some might argue that what we really need to measure is organic sales growth. This backs out the effects of P&G selling off a division or discontinuing certain products.

Once again, though, a troubling pattern emerges. 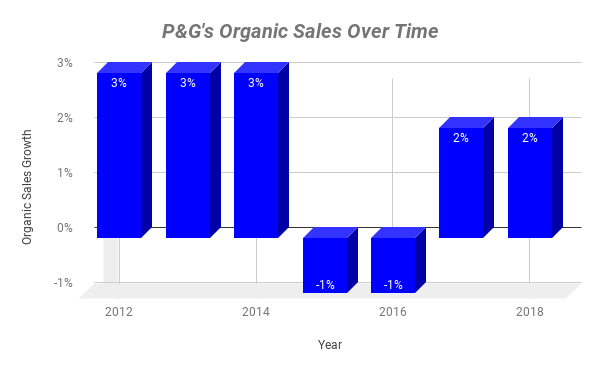 Data source: SEC filings. Note that 2018 figures are for the first six fiscal months of the year.

The company started reporting this metric in 2012. For the first three years, things were moving in a fairly healthy direction for a $200 billion global behemoth. Starting in 2015, however, organic sales went negative -- something that should almost never happen to a company that claims "pricing power" as a key moat.

And while the uptick over the last 18 months might seem encouraging, there's an important caveat to note: Those increases have been driven solely by volume growth -- there were no price increases to speak of. While there's nothing wrong with gaining a little volume -- especially if it's to win over customers in new markets -- the fact that the company hasn't been able to grow organic sales and increase pricing for almost four years should be setting off alarm bells for investors.

What price are you willing to pay?

Once again, however, this would be much ado about nothing if P&G's stock reflected this reality. Unfortunately, it does not. Currently, shares trade for 20 times both trailing earnings and free cash flow. That's not ostentatiously expensive, but it's also pretty high for a company with that kind of recent growth history.

What's particularly dangerous about buying and forgetting about this stock in a retirement portfolio is that -- if Alkin's prediction about the erosion of brands is correct -- P&G will look more tempting over the medium term. As the company continues paying out its dividend, but the stock price falls on weaker fundamentals, the yield could boom, encouraging unsuspecting retirees to pounce on a high payout.

Without paying careful attention to the underlying business, that could be a dangerous move -- one that I think most retirees should avoid.