There's good reason to believe the return-on-investment party is just getting started for ADT Inc., Shopify, and Netflix.

Back in 2004 when it went public, Google was far from being the massive technology conglomerate that Alphabet (GOOG 2.36%) (GOOGL 2.39%) is today, but it was still a leader in the search engine space, and it was clear that it knew exactly what it was doing and could execute on its plans.

At any given time, there will always be companies in the stock market poised for similarly impressive growth. So we asked a few Motley Fool contributors to name some businesses they think have potential that resembles that of the Google of yore. They came back with ADT Inc. (ADT 2.74%), Shopify (SHOP 0.84%), and Netflix (NFLX 2.72%). 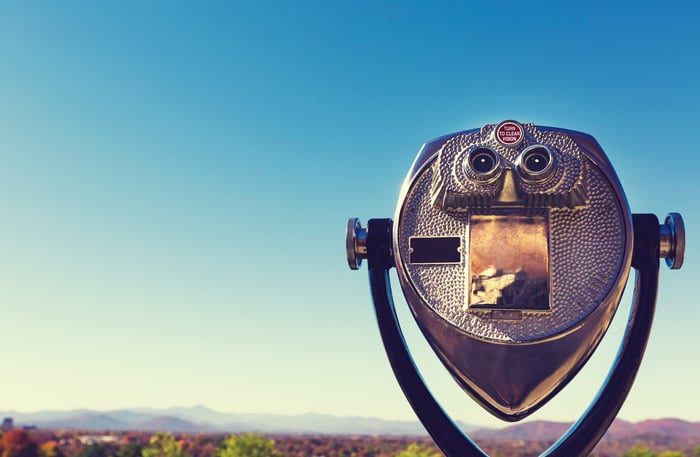 Neha Chamaria (Shopify): Google was already profitable when it IPOed in 2004. But the numbers that stood out in its books quarter after quarter were on the top line: Its revenue was growing at a torrid pace. That, combined with Google's potential to become a tech juggernaut, caught investors' attention, and went on to make it one of the most successful stocks ever. I see similar potential in Shopify -- an e-commerce powerhouse in the making that's already turning heads with its differentiated product offerings and strong revenue growth.

Unlike Amazon.com, which operates its own marketplace, Shopify offers a cloud-based e-commerce platform that makes it easy for small and medium-sized businesses to create and run their own online stores. Shopify earns monthly fees (subscription solutions revenue) from the merchants that use its platform, as well as a percentage of transactions made on its portal (merchant solutions revenue).

Shopify generated a record $9.1 billion in gross merchandise volume in the last quarter even as its merchant base crossed 600,000. Its revenue surged 73% in 2017. One strong factor appears to be working for Shopify: Access to entrepreneurs and smaller businesses to its technologically advanced, e-commerce platform. Just to give you an idea about what Shopify is doing on the tech front, the company recently partnered with none other than Apple to bring augmented reality to its platform.

While Shopify isn't profitable yet because it's spending heavily to grow and market its business, investors are likely to be richly rewarded in the long run given the profitable niche it's carving for itself in the e-commerce space.

You can invest in this security leader again

Chuck Saletta (ADT): By the time it went public, Google was already recognized as an internet search leader. Home and business security company ADT is similarly a leader in its industry in the U.S. and Canada. After about two years as a privately held company, it rejoined the public market last month, and is actually trading below its IPO price. That gives investors the opportunity to buy in for less than those "lucky" enough to get a piece of its offering.

Home and business security monitoring, like internet search, is a business where scale matters a great deal. With alarm systems, central monitoring sites handle the response and dispatch duties. The more customers a company has, the more widely it can spread its overhead costs. As the largest player in its industry, ADT is thus best able to cover the costs of providing its service.

ADT's shares aren't just trading below their IPO price, they're downright reasonable compared to the company's prospects. They're valued at less than 15 times its expected forward earnings,  and the company is expected to be able to grow earnings at a healthy clip over the next five or so years.

If there's one risk with ADT, it's that its balance sheet has been "levered up" by its former private equity owner:  Its debt-to-equity ratio is a rather high 3.9.  Given its scale and relatively asset-light operating model, it will likely be able to generate enough cash to comfortably service its debt. Still, that's something to watch, especially if its growth doesn't materialize to the expected degree.

Chris Neiger (NFLX): Netflix is a powerhouse in its niche of video streaming, just like Google was (and is) with Internet search. The two companies similarly focused their attentions on building amazing products, and neither has looked back since. But the difference is that Netflix is only beginning to tap its international market potential.

Netflix ended 2017 with about 118 million total subscribers and more than 53% of them are international customers. It would therefore be logical to assume that the majority of its sales and earnings come from outside the U.S. -- but they don't. International subscribers generate about 49% of revenue and have a contribution margin (which is sales, minus variable costs) of just 8.7%, compared to a 34.4% margin for Netflix's domestic customers. What all of this means is that Netflix has a huge opportunity to raise rates for its international customers in the coming years, just as it has done in the U.S., and drastically increase its margins in other markets.

Netflix had its first full year of international-contribution profits in 2017, and more than doubled its global operating income as well. Conservative estimates forecast its international subscriber numbers will exceed 100 million just two years from now, which would require about 60% growth. That doesn't even include domestic customer growth over that same time period. Even if Netflix rolls out price increases more slowly for its international customers than it has domestically, those customers will still add significantly to the company's profits.

Strong subscription and sales growth both at home and abroad have, of course, pushed up the Netflix's share price and valuation. Shares are trading at 67 times forward earnings estimates right now. But Netflix isn't anywhere near finished growing -- and its international profits are just getting started.