He's still using his mom's Netflix account, but he's the greatest investor of his generation.

It's easy to see why Warren Buffett is considered the greatest investor of all time. His company Berkshire Hathaway (BRK.A 0.10%) (BRK.B -0.03%) has become one of the most valuable in the world largely due to his investments, both in stocks and the companies he's bought. Investors who were lucky or smart enough to buy Berkshire stock in its early days have become millionaires as shares gained an amazing 1,826,163% from 1965 to 2015. That's an annual growth rate of 21.6%, more than double the 9.9% that the S&P 500 has returned in that time with dividends included.

Investors flock by the thousands to Berkshire's annual meeting in Omaha, Nebraska, and his aphorisms about economic moats, value, and other subjects have become virtual gospel in the market.

However, like anyone, Buffett is a product of his time and generation, and as an 87-year-old, his perspective on investing is skewed by his age.

For instance, he ignored the greatest story in business in the last generation -- the emergence of the tech industry -- as he long refused to buy tech stocks because he said he could not value them or predict where they were going. Today, the tech industry is more valuable than any other. In fact, the five most valuable American companies, and the only ones bigger than Berkshire, are all tech companies. 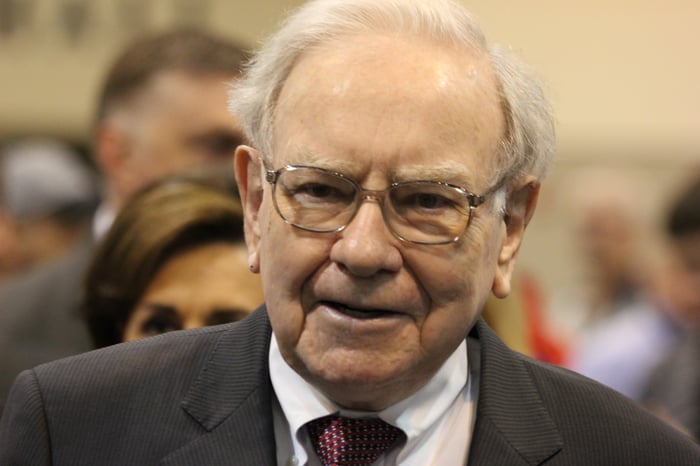 When Buffett finally broke his personal boycott of tech stocks, he did so by dumping more than $10 billion in 2011 into IBM, in part because he was so familiar with the company after reading its annual report for 50 years. That investment turned into a terrible bet as IBM shares dropped around 20% during the seven years Buffett owned them, while the S&P 500 more than doubled. He later said he should have bought Alphabet or Amazon, instead.

Even Buffett's own personal tastes seem to color his stock picks. For instance, he is a big fan of junk food in general and Coca-Cola (KO 1.63%) products in particular, and the beverage giant is his second-largest holding. Buffett once even mocked Whole Foods Market, saying he doesn't see many customers smiling there. However, Coke stock has also significantly underperformed the market over the last 10 years.

If Buffett had been born 50 years later, his investing style would be the same, but his stock picks would probably be much different. It's impossible to know what the Oracle of Omaha would buy if he were just getting started today, but here are three stocks that would likely be on his radar.

Millennial Buffett would be all over social media, of course, communicating with investors, and posting selfies on Instagram. No doubt he'd be a fan of Facebook (FB 1.18%), and not just the platform, but the stock, too. Facebook has plenty of the qualities that a tech-savvy, value investor like Millennial Buffett looks for. First off, it has a huge economic moat, thanks to the network effects of a platform with more than 2 billion members, and the unique value it offers advertisers. The 87-year-old Buffett has long been a fan of newspaper stocks, noting that newspapers can essentially act as local monopolies if they have no nearby competition. Facebook offers this same advantage, but on a global scale in the digital age, thanks to the power of the internet.

Buffett himself also recognized the power of digital advertising, noting that he should have bought Google after he realized the click rates that GEICO, his auto insurance subsidiary, was paying the search giant. Facebook, like Google, has similar pricing power.

At a P/E of 33, Facebook may not look like a typical value stock, but considering its earnings per share jumped 54% to $5.39 last year and it had a 50% operating margin, the stock looks cheap for its growth rate.

Millennial Buffett was into the kombucha craze for a minute, but these days he's a devoted cold-brew aficionado. While he likes to visit independent coffee shops from time to time, he's been a longtime Starbucks (SBUX 2.03%) Rewards member, and he keeps the java giant's app handy on his phone.

Young Buffett also recognizes the market power of Starbucks. In many ways, Starbucks is to his generation what Coca-Cola was to the real Buffett's. He once boasted that Coca-Cola was such a strong brand that if you gave him $100 billion to take away Coke's market leadership in soft drinks, he would give it back to you and say it couldn't be done. However, these days Starbucks seems to be doing just that.

Domestic soda sales have declined every year since 2004, and the coffee chain is a big reason. Millennials are largely turning away from sugary sodas and the artificial sweeteners in diet beverages, but coffee consumption seems likely to continue to grow as workplace culture for millennials has been moving out of the traditional and into places like coffee shops.

Starbucks has also capitalized on the huge opportunity in China, which chairman Howard Schultz believes will one day be its biggest market, ahead of the U.S. It's also established itself as a consistent dividend payer, likely to be a Dividend Aristocrat one day, and trades at a reasonable P/E of 27.4, not much higher than Coke at 23.5.

Splitting checks is so Gen-X. After Millennial Buffett grabs a bite with his buddies at happy hour, he just Venmos them a few bucks on the Uber ride home. Which likely gets him thinking about Venmo's parent company, PayPal (PYPL -0.91%), and how it has a business model similar to that of the credit card companies he likes. PayPal, which helps small merchants process payments, collects transaction fees on payments and Venmo gives it more money-making opportunities.

In 2014, PayPal acquired Venmo, the app that's become popular with millennials for sending money to reimburse one another for expenses like drinks or rent. PayPal has been slow to monetize Venmo, but has been taking steps recently, such as testing Venmo payments at retail locations.

Nonetheless, PayPal is growing fast, as the opportunity for digital payments could be huge. In 2017, earnings per share grew 27% on a 21% increase in revenue, and management expects to increase another 20% in EPS this year.  At a P/E of 41, the stock may not be cheap, but if the company maintains its lead in digital payments, investors should reap the long-term benefits.

Editor's note: This article has been corrected to reflect that PayPal does not collect interest on the money users have in their PayPal accounts.