Please ensure Javascript is enabled for purposes of website accessibility
Log In Help Join The Motley Fool
Free Article Join Over 1 Million Premium Members And Get More In-Depth Stock Guidance and Research
By Jim Crumly - Feb 20, 2018 at 6:02AM

The market is giving us a great opportunity with this dividend stock that could have some big catalysts in 2018.

In times of high market volatility, it's nice to have some stocks that pay out a dependable dividend. The payout can support the price of the stock, and hey, it's just comforting to see those quarterly credits in your account statement, rain or shine.

Most big drug stocks have a decent dividend, and they are often considered defensive investments in the sense that the underlying businesses are not so sensitive to economic downturns. Eli Lilly (LLY -3.02%) is one such stock, and it turns out there are a number of factors coming together for the company indicating that investors may be looking at the best opportunity to buy the stock in years.

The new CEO now has a big checkbook

Like a lot of other companies in the drug industry, Lilly's options for investing in its business just expanded thanks to the new tax law. Last month, the company revealed that repatriation of foreign profits will free up $9 billion of cash that was held by global affiliates. That's a big chunk of change Lilly could use to invest in future growth. 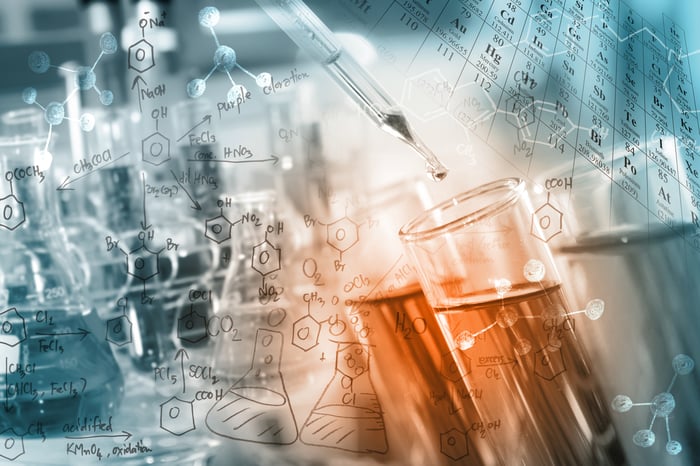 In the conference call last quarter, management said the money will be deployed over 2018 and into 2019 according to its capital allocation priorities. Of the total, $2 billion will be used to reduce debt, and the rest will be used to provide more funding for its marketed portfolio and pipeline development, for business development, and for cash returns to shareholders via raises in the dividend and share buybacks.

All of these uses for the cash hoard should increase the value of the business, a fact seemingly lost on the market, which has driven the stock price down 14% since the law passed. But the one that should perk up the ears of long-term investors is business development. Lilly says it will be looking to build its pipeline by making acquisitions or licensing deals to bolster its core positions in diabetes, oncology, immunology, neurodegeneration, and pain.

Eli Lilly has generally been very conservative about making acquisitions, although it did augment its pain management pipeline last year by buying CoLucid Pharmaceuticals, picking up a migraine drug that it will submit for FDA approval this year. But when pressed by analysts last month, CEO David Ricks, who took the helm at the beginning of last year, said the company has an ambition to "step up its game" in business development. Further, he said he has launched an investigation into why Lilly has done so little to bolster its pipeline this way, and has reorganized to move business development into the R&D organization. He hopes to shift the attitude of the organization to recognize that business deals are an important part of innovation.

With a new sheriff in town and a big pile of money, expect that Lilly will find new ways to create value for its shareholders.

A sale of animal health would create value

$9 billion is a pretty tidy sum, but Eli Lilly could actually raise even more than that by selling its animal health division. Last fall, the company announced it is reviewing the future of its Elanco animal health division, with an eye to a possible divestiture or spinoff. A sale could bring a tidy sum. Revenue from Elanco last year was $3.09 billion. Eli Lilly overall is valued at about 3.5 times sales, which implies that Elanco could be worth as much as $10.8 billion. But animal pharmaceuticals is hot growth industry, and a launch or sale could fetch much more.

Pfizer spun off its animal health business in 2013 to create Zoetis, which has been wildly successful with investors. Zoetis sells for twice Lilly's valuation -- 7 times sales. That company has higher growth than Elanco has, but it's reasonable to assume Lilly could get somewhere between $10 billion and $20 billion.

Not only could a sale of the animal health business give Lilly a bundle of cash to work with, it would give an immediate boost to the company's growth rate. The company went through some rough years between 2011 and 2014 when patent expirations resulted in some quarters of declining revenue. During that time, the animal health business provided some stability and much-needed top-line growth.

But now that the worst is over for loss of exclusivity, and growth from newly introduced drugs is more than making up for further losses from the established portfolio, animal health is more of a drag on results than a help. In 2017, Lilly's revenue grew 7.8%, but if the animal health results are subtracted out, that increase would have come to 9.5%. That extra point and three quarters of growth could make a big difference to the company's valuation. Profit growth would be higher, too, since the animal health segment has lower margins than the human health segments.

Nothing speaks more loudly about management confidence in the future than when a yield-oriented stock raises its dividend, and on December 11, Lilly raised its dividend by 8%. On a percentage basis, that is the company's largest dividend raise in 15 years.

The balance sheet is in great shape -- so much so that one analyst in last month's call questioned why Lilly would use $2 billion of its cash windfall to reduce debt when it could invest it in the business. The $3.9 billion of operating cash flow the company generated in the first three quarters of 2017 was over twice what was needed to cover the dividend.

Companies hate to cut dividends, so when Lilly made such a big hike in its payout, it was a statement that the board expects there will be nice growth ahead. Between sales growth of new drugs and the $500 million cost-cutting initiative it announced last year, the company should have plenty of cash to support its generous 3% dividend yield and to fund growth, even without the decline of 350 basis points the company expects to see in its tax rate.

Eli Lilly is not without its risks. The company still has older drugs in its portfolio that are exposed to generic threats -- notably Cialis. Also, Novo Nordisk (NYSE: NVO) will shortly be introducing a diabetes treatment that could be superior to Lilly's Trulicity, the blockbuster that is supplying a good chunk of the company's drug portfolio growth. However, unlike many of its peers, Lilly is not dependent on one big drug for its profits; its biggest seller, Humalog, accounted for only 13% of sales in 2017. That lessens the risk of a sudden competitive surprise, but some attrition will be a fact of life.

Let's not ignore the possibility that the company might not use all of that cash to its best advantage. There is going to be competition for the best drug assets out there, especially in the area of oncology, and Lilly could overpay. Management said to expect "a busy year in business development for oncology for Lilly." There are plenty of similar discussions going on in most big pharma companies, suddenly flush with repatriated profits.

However, a number of developments are coming together to create an opportunity for Lilly investors: greater optionality for tranformative deal making, a potential catalyst in the divestiture of the animal health division, and an improving profit growth picture. The market hasn't recognized the potential of these factors, and the recent market pullback has only contributed to the opportunity, with the stock hitting a new 365-day low and trading down 17% from its high last month.

Eli Lilly may be just the right medicine for the market jitters.