Please ensure Javascript is enabled for purposes of website accessibility
Log In Help Join The Motley Fool
Free Article Join Over 1 Million Premium Members And Get More In-Depth Stock Guidance and Research
By Dan Caplinger - Feb 21, 2018 at 8:39AM

Despite California wildfires, the company still held up well.

Getting food from point A to point B isn't something that most people think very much about, but for Chefs' Warehouse (CHEF 1.45%), it's a huge part of its business. By making top-quality food items available to consumers and restaurant clients in a reliable fashion, the high-end food sourcing company aims to differentiate itself from competitors seeking to disrupt the food industry more broadly while keeping all of its customers as happy as possible.

Coming into Tuesday's fourth-quarter financial report, Chefs' Warehouse investors wanted to see continued evidence that the food distributor could stay ahead of the curve and keep growing. Chefs' Warehouse's results were better than most had anticipated, and the fact that the company achieved success despite encountering substantial obstacles was encouraging. Let's take a closer look at Chefs' Warehouse and what its latest results say about its prospects. 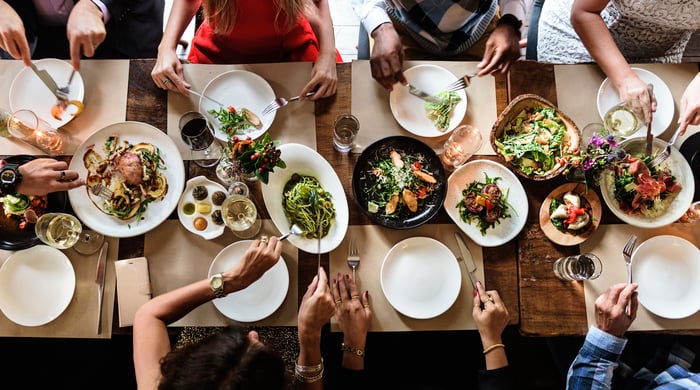 Chefs' Warehouse's fourth-quarter results finished a good year for the company. Revenue rose 4% to $357.1 million, outpacing the 3% growth that most of those following the stock had expected and rising despite the fact that this year's quarter had only 13 weeks compared to 14 in the previous year's quarter. Modified pro forma net income of $6.2 million was higher by 32% from year-earlier figures, and the pro forma earnings of $0.23 per share topped the consensus forecast for $0.22 per share on the bottom line.

Tax reform played a role in helping Chefs' Warehouse. The company got a $3.6 million one-time gain as a result of revaluing its net deferred tax liabilities under the new tax laws.

A combination of acquisitions and organic growth helped push Chefs' Warehouse's sales higher. The acquisition of Fells Point Wholesale Meats last August contributed $16.8 million in higher sales, or roughly half of the gain in sales when you adjust for the different lengths of the two quarters. Organic sales adjusted for the 13-week quarter rose 7%. Organic case counts were higher by 4.4% in the specialty division, with unique customer counts rising 4% and placements climbing at a 5.3% pace.

Some other metrics weren't quite as favorable but still showed the effort that Chefs' Warehouse has made. The company sold 0.6% fewer pounds in its protein division during the quarter when you take out acquisition-related impacts, with the impact of the California wildfires costing the company nearly a full percentage point in pounds sold. Inflation came in at 4.2% in specialty and 0.7% in protein, slowing from past periods and reducing its upward influence on sales.

Margin performance at Chefs' Warehouse was a bit weak. Gross margin fell slightly, with poor results in the protein division offsetting gains in specialty foods. Operating expenses were higher by 15% from year-ago levels, and that led to a more than two percentage point drop in operating margin to just 4.3%.

CEO Chris Pappas celebrated the strong year. "Our overall customer base remained health in the fourth quarter," Pappas said, "despite the wildfires in California." The CEO pointed to the importance of continuing to grow Chefs' Warehouse's top line even in the face of tough conditions.

Chefs' Warehouse sees 2018 spurring continued growth. Net sales should be between $1.4 billion and $1.44 billion, with net income of $19 million to $22 million producing modified pro forma net income of $0.68 to $0.78 per share. The bottom-line projections are ahead of what most investors were looking to see, and the numbers even take into account the fact that the company's convertible notes will potentially dilute Chefs' Warehouse's results in 2018.

Investors seemed pleased with the results that Chefs' Warehouse enjoyed, and the stock climbed 4% in after-hours trading following the announcement. If the company can do this well even with tough conditions, then any return to a more typical environment could spur even faster growth in the future.