Walmart (NYSE:WMT) shares were getting shellacked after its latest earnings report. Despite posting strong comparable sales growth and beating revenue estimates, the stock had its worst day since October 2015.

Shares dropped nearly 10% as investors worried about slowing e-commerce growth and an earnings miss. After the stock jumped 43% last year, shares may have been at risk for a pullback as well.

Still, this was an overall solid report, and the company is continuing to execute its strategy effectively. Here are a few reasons why Walmart is still on track after its latest report. 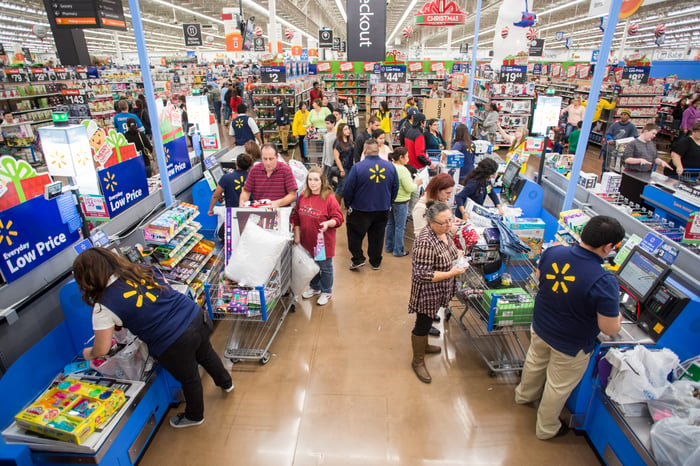 At Sam's Club, comparable sales growth was also solid, increasing 2.4% on a 4.3% uptick in traffic, and management's guidance for the coming year was particularly encouraging. For the year ahead, the company sees comp sales growth of 2% at Walmart U.S. and 3-4% at Sam's Club, which excludes the effect of removing tobacco from stores.

Considering the number of retailers that are seeing comparable sales fall as consumer buying habits shift, Walmart's ability to deliver consistent same-store sales growth is a sign of its strength.

Walmart stock seemed to take a hit as U.S. e-commerce growth slowed from 50% in the third quarter to just 23% in the fourth quarter, but management offered an explanation for the slowdown as well as a plan to deliver 40% e-commerce growth for fiscal 2019.

The company said that most of the decline in e-commerce growth was due to lapping its acquisition of Jet.com, but it acknowledged that some operational challenges curtailed growth.

On the earnings call, CEO Doug McMillon noted that the majority of the company's e-commerce sales growth has come from Walmart.com and online grocery, and the company seems optimistic about delivering another year of 40% e-commerce growth as it expands its number of online grocery locations from 1,000 to 2,000 this year and launches other initiatives and investments in e-commerce.

3. The retailer is executing on its strategic goals

Finally, while the slowdown in e-commerce may have been discouraging, it's clear Walmart is delivering on its goal of generating strong online sales growth. In fact, McMillon said on the call that seasonal spikes in sales of holiday items like gifts and toys were strong enough that they interfered with the company's ability to keep basic everyday items in stock to sell online.

Keeping Amazon at bay seems to be Walmart's most important strategic priority. That was the motivation for it spending $3.3 billion to acquire Jet.com, as well as making subsequent acquisitions like Bonobos, Modcloth, and Moosejaw. As competition between Amazon and Walmart heats up, it's especially important for Walmart to deliver consistent sales growth, both online and offline, to maintain its market share. Growing earnings has become less important, though the company expects per-share profits to increase by about 10% next year.

With moves to raise wages and offer better family leave benefits, Walmart has lowered its employee turnover rate, and store performance has improved. Same-store sales and traffic are rising, and the company continues to gain e-commerce market share, led by the expansion of its online grocery pickup program.

Keeping up with Amazon won't be easy, but Walmart has certain advantages, including its store footprint, which gives the company a location with ten miles of 90% of Americans. If management can execute on its guidance for the year, which includes earnings per share of $4.75-$5.00, the stock should recover from today's sell-off.