Please ensure Javascript is enabled for purposes of website accessibility
Log In Help Join The Motley Fool
Free Article Join Over 1 Million Premium Members And Get More In-Depth Stock Guidance and Research
By Brian Withers - Feb 21, 2018 at 10:20AM

A record revenue quarter wasn’t the only good news management shared during the latest earnings call.

Skechers (SKX 5.21%) delivered its fourth record-revenue quarter in a row earlier this month. After posting solid performance across the board, management took the time to highlight some of the footwear company's strengths and long-term opportunities. Here's what investors need to know.

No. 1: International growth is healthy

COO David Weinberg said: "For the quarter, our wholly-owned international subsidiary business grew by 41.8%, and our joint venture sales grew by 58.9%. The markets with the highest dollar gains were China, South Korea, and the U.K., and those with the highest percentage gains were Italy and Spain."

A highlight of this year's international showing was China. Expecting to hit $500 million in 2017 revenue, the company blew past that number and turned in a full-year performance "just a little bit north of $575 million", propelled by a record 1.4 million pairs shipped for Singles' Day (the biggest online shopping day in China) and fourth quarter growth of 78%. 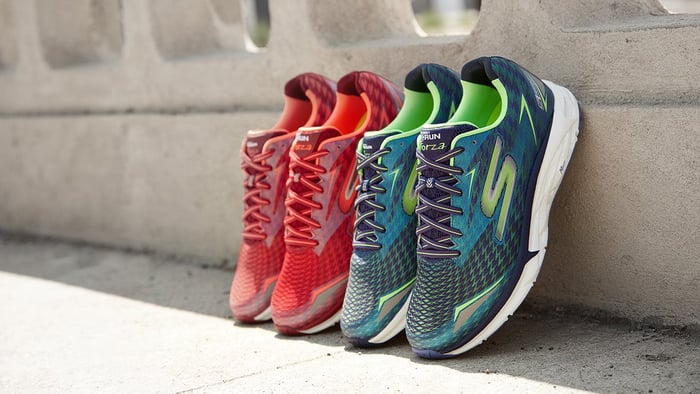 While the results in China were awesome, this isn't a one-country story. Skechers has done well in all its regions internationally, as its joint-venture model continues to fuel growth. The company doesn't break down sales by region, but it indicated that 50.6% of its revenue came from international sources this quarter. The company posted impressive 16.5% same-store sales growth for non-U.S. locations.

Management also discussed the long-term opportunity in India. While the business there is only $60 million to $70 million in revenue today, the potential is much greater. Management indicated that India could be a "multi-hundred million dollar country for us, maybe even closer to $1 billion." A lot needs to happen to make that a reality, but I like that management is taking the long view.

Part of what is complementing the company's international business is its recent efforts to expand in e-commerce.

[...] we have a massive online presence. [...] we show very well online, the brand is demanded online, it's searched online, and does sell whether it's directly through us, third parties around the world as we continue to grow our site. We are investing significant amounts of money into our digital capacity, and we will be changing the site.

While Skechers has had an online business since 1998, it only recently became serious about this important sales channel. E-commerce business has done well this year, with a reported 21.9% growth domestically and double-digit growth in China.

It's likely that the company's recent success with e-commerce in China has encouraged management to continue to invest in its digital presence globally. Skechers currently has e-commerce sites in Chile, Germany, the U.K., Spain and Canada with the last two countries added in 2017. Once the company upgrades its website, it says it hopes to have a Skechers.com online presence around the world, in every place it has subsidiaries.

No. 3: Revenue growth will continue

"We don't see the growth slowing down, both domestically and internationally," Weinberg said.

While international growth has been impressive, domestic growth contributed to a record $4.16 billion revenue year for Skechers. Domestic wholesale revenue grew 11.6% in the fourth quarter and 4.1% for the year. The company expects to continue to expand the domestic wholesale business in the "mid-single digits". Its popular products, its solid brand, and value pricing in the U.S. have helped put a solid year in the books here at home. The company continues to be confident in the domestic market and has just opened an 18,000 square-foot superstore in Tucson, Arizona.

With solid top line results around the world and management's confidence in its growth prospects, Weinberg indicated that it would get "close to $6 billion [in revenue] in 2020". Given the company's track record of under-promising and over-delivering, I'm sure this target is well within reach.

While it was just a mention in the earnings call, management authorized a $150 million share buyback -- signaling its confidence about the future, especially after the stock registered a 54% gain in 2017. Without a doubt, there was a lot to like in the company's comments, and Skechers looks poised for a strong 2018.