There were several things to like in Activision Blizzard's (ATVI 0.09%) fourth-quarter earnings release. Engagement across the company's games was strong, and digital in-game spending for the full year showed growth over 2016. But there was particularly good stuff on the fourth-quarter conference call about Activision's ambitious new esport event, Overwatch League.

Overwatch League officially began Jan. 10, and has attracted several sponsors so far. But the most important sign as to how well Overwatch League is performing is the increased demand for expansion teams that management reported. 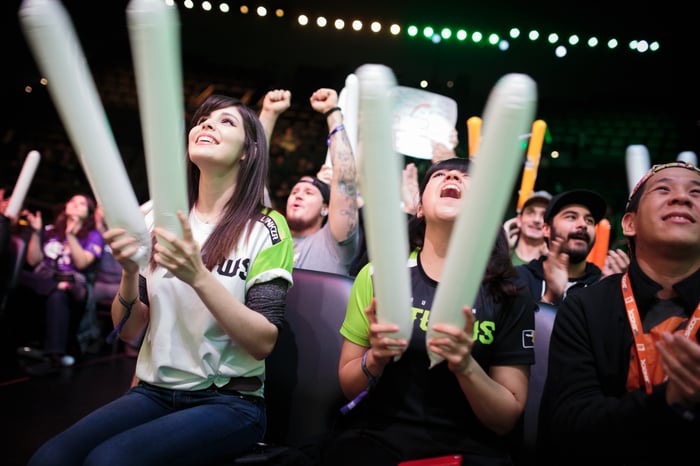 Looking at Overwatch League from a team owner's perspective

The thinking that goes into buying a team in Overwatch League is no different than buying a piece of a business in the stock market. A prospective owner must assess the risks against the long-term potential for the asset in question to generate income and appreciate in value.

With that in mind, it was a good sign when Activision signed up New England Patriots owner Robert Kraft, who has built one of the most successful NFL franchises of all time, to buy one of the first of 12 Overwatch League teams last year.

But Activision is not content with just 12 teams. There must be more teams to scale up Overwatch League into the large, stand-alone business that Activision CEO Bobby Kotick envisions.

Viewership is hitting the mark with major brands

To sell more teams, it was imperative Overwatch League showed strong viewership during the first season. And the league needs sponsors. Activision is off to a good start, according to president and CEO of Blizzard Entertainment, Michael Morhaime: "The [Overwatch League] games have been exciting to watch, and the reception from our viewers has been really spectacular. So far, everything has either met or exceeded our expectations."

Leading up to the inaugural season, Activision management had been talking up the business prospects of Overwatch League for its ability to attract advertisers and sponsors, mainly because of esports' core audience of millennials -- a coveted demographic that big brands find difficult to reach.

So far, this is playing out. "We had an impressive audience per minute of over 400,000 on opening day. We've also been very happy that several major brands have partnered with Overwatch League, including Intel, HP, Toyota, T-Mobile and Sour Patch Kids," Morhaime said.

Signing up these brands since the opening week is a great sign that Overwatch League is on schedule to be the growth driver for the company that management has been pitching to shareholders.

But the most telling comment management shared on the conference call was that it is seeing heightened interest from prospective team owners who want to buy additional teams.

During the call with investors, Kotick said: "We're building this league for the long term, and we're pleased with the early strong momentum that we have. ... Our efforts have already led to increased global demand for expansion teams, which we expect to start selling later this year." 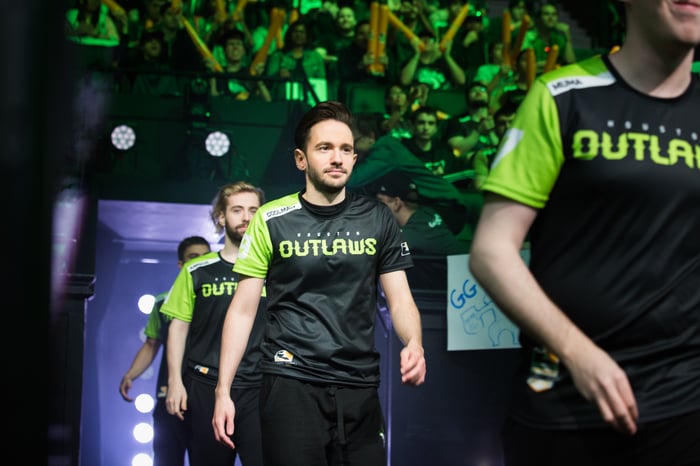 Members of Overwatch League's Houston Outlaws with their game faces on before a match. Image source: Activision Blizzard.

Last summer, around the time Activision announced the initial sale of seven teams, there were rumors that the company was having trouble finding enough interest to sell teams at the price management was asking. Whether those reports were true or not, the 10 million total views online and a packed Blizzard Arena in Los Angeles were obviously enough to suppress any doubt.

On the conference call, Morhaime mentioned that team prices are going up as a result of increased demand: "In terms of selling expansion teams, we're very excited with the reaction and the interest in expansion teams and pretty confident to say that price is going to go up."

If team prices are going up, that obviously implies the perceived value of Overwatch League has also increased since opening week.

Morhaime's confidence in stating that the price is going to go up indicates to me that prospective team owners are lining up around the block to get in on what they see as a good long-term investment.