Please ensure Javascript is enabled for purposes of website accessibility
Log In Help Join The Motley Fool
Free Article Join Over 1 Million Premium Members And Get More In-Depth Stock Guidance and Research
By Rich Smith - Feb 22, 2018 at 11:53AM

Helios and Matheson now owns a supermajority of MoviePass -- and MoviePass may survive.

IT consultant-turned-movie mogul Helios and Matheson Analytics (HMNY 10000.00%) saw its stock plunge last week after the company announced plans to issue a huge slug of new shares -- enough to dilute existing shareholders by as much as 50%. Helios & Matheson stock has continued drifting downward since, as it became apparent that Helios would use the cash raised by this equity sale to buy a supermajority stake in its MoviePass subsidiary -- 78% of shares outstanding.

Now, at long last, Helios and Matheson is getting its reward for making that bold bet. 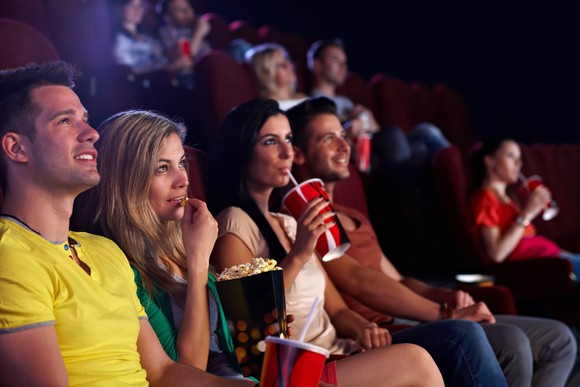 That may seem an aggressive target, but remember that just four short months ago, Helios and Matheson stock was trading for six times more after slashing its prices, posting exponential membership growth, and receiving a buy rating from analysts at Maxim Group.

Since that time, MoviePass has grown its membership base roughly five times, from 400,000 paying subscribers to a recently reported tally of 2 million.

Granted, not all investors think this is a good thing. On the one hand, 2 million subscribers paying as much as $10 a month for MoviePass means the company is likely pulling down $20 million a month or more in revenue right now.

That's $240 million a year, $187 million of which would be attributable to Helios and Matheson stock, which last year booked a grand total of less than $5 million in revenue. On the other hand, with MoviePass reimbursing some of the largest theater chains roughly $12 face value for every ticket its members buy with their MoviePass debit cards, MoviePass is probably losing as much as $4 million a month assuming its 2 million members each see one movie per month...or $28 million a month if they see two...or as much as $100 million a month if members decide to watch a movie every weekend.

And yet, it's precisely here that Canaccord Genuity spots an opportunity for MoviePass -- and for Helios and Matheson stock.

Consider: Surveys say that, on average, Americans currently go to the theater to see a movie about five times per year. In fact, data cruncher Statista.com finds that only 3% of American moviegoers currently see a movie "once a week or more." The vast majority of us (80%) currently visit the movies only "a few times a year," "almost never," or literally "never."

Thus, if MoviePass gets people to see even just one movie a month, they've already changed how the movie business operates in the U.S. If MoviePass can get folks out to the movies twice a month (let alone five times), it will entirely upend the industry.

In Canaccord's view, MoviePass' rapidly growing membership will give it "considerable bargaining power" versus the movie theater operators -- power to negotiate steep discounts on prices MoviePass pays for the movies its members watch, and "push costs down enough to reverse the current negative gross margin profile" of Helios and Matheson.

Admittedly, there's little evidence of this happening just yet. Far from offering MoviePass price concessions, China-owned theater chain AMC Entertainment (AMC -0.73%) has launched a war of words against MoviePass, saying that its subscription business model is "not in the best interest of moviegoers," its $10 monthly fee "is unsustainable," and for its part, AMC is exploring "whether it may be feasible to opt out and not participate in this shaky and unsustainable program."

And just to sharpen the point, AMC expressly stated: "AMC will not be able to offer discounts to MoviePass in the future, which seems to be among their aims."